When I mention giant redwood trees, Sequoia National Park and California are probably two of the first places that come to mind. But if I’d mentioned giant redwood trees about 34 million years ago, you’d most likely be thinking of Colorado instead!

Thirty-four million years ago, what is now the Florissant (pronounced FLOR-ī-sent) Valley in the Rocky Mountains of central Colorado used to be a much warmer valley that sat in the shadow of the Guffey Volcanic Complex. The world was a very different place back then – different climates, different animals; the Florissant Valley was home to a three-toed horse and an ancestor of the rhinoceros, not to mention ancestors of numerous other present-day plants and animals.

It might seem strange that we can know so much about something that happened so many years ago, but a snapshot of this time in Earth’s history is extremely well preserved in the Florissant Valley, making it not only a neat place to visit but also an exceptionally important area for geologists and paleontologists attempting to understand the distant past. Here’s what they’ve deduced so far:

Thirty-four million years ago, the Guffey Volcanic Complex erupted, sending a stream of volcanic debris, water, and mud down the slopes of the volcano. This mixture – called lahar – coated the valley in a layer about 15 feet (5 m) deep before coming to rest and solidifying. Anything in the path of the lahar was either swept away or buried beneath the mud flow.

Lahar from another eruption blocked the path of Florissant Creek, damming it up to form Florissant Lake. Over the years, plants, animals, and algae living in the lake would die and sink to the bottom, where they became mixed with the sediment and occasionally coated by a fresh layer of ash from the volcanoes. Beneath the surface of the lake, the pressure of the water compressed the ash, causing it to harden and encase any dead plant or animal remains trapped beneath the surface.

Meanwhile, on dry land, two geologic phenomena were taking place: (1) any animals and plants trapped by the lahar died and were preserved within these layers of volcanic material, and (2) the minerals in the lahar began to seep into the trunks of the dying redwood trees. As minerals seeped into these decaying cells, they hardened and preserved what remained of the tree, essentially turning it to rock in a process called permineralization. The result is a petrified tree trunk.

Florissant Fossil Beds contains many of these petrified giant trees as well as thousands of well-preserved fossil specimens. It’s for this reason that the area is now preserved as a National Monument.

Located about 40 minutes west of Colorado Springs, Florissant Fossil Beds lies at an elevation of about 8500 feet (2600 m), an unassuming area of grassy meadows and pine forests that sits in the shadow of Pikes Peak. But beneath all the vegetation are the layers of rock that tell the geologic story of the area. 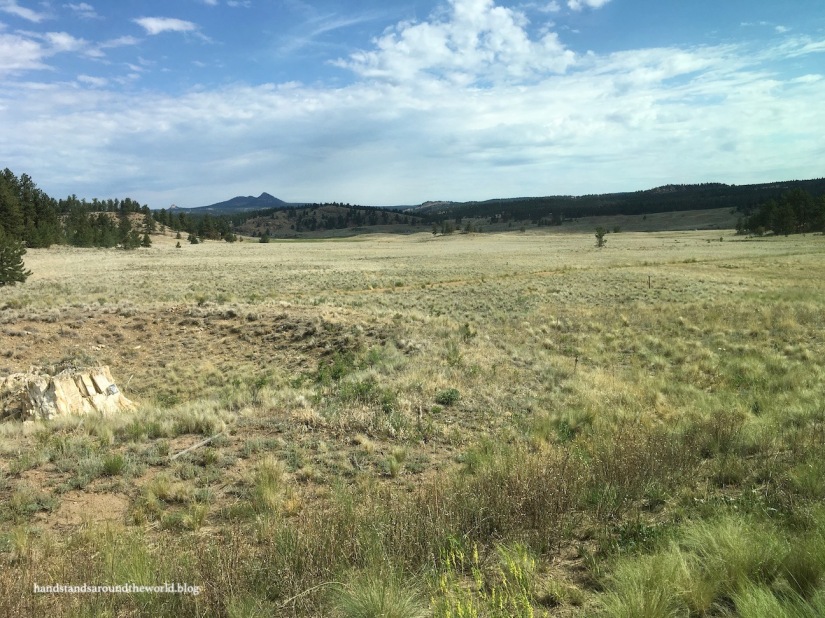 The visitor center contains a large display of the fossils uncovered at Florissant and a thorough explanation of the region’s history. It also recaps the scientific processes and discoveries that have helped scientists reach their current theories. 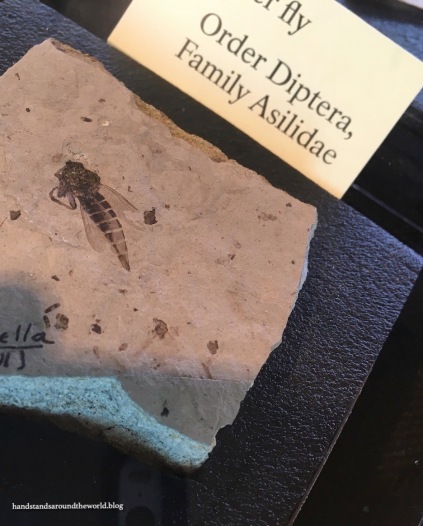 (To clarify, there are more petrified stumps beneath the surface that have yet to be excavated, but the best ways to locate and excavate them without causing any damage to the fossils or the ecosystem are still being studied.)

We toured the visitor center, walked the ponderosa pine loop, and then joined a ranger led talk/hike of the petrified forest loop. However, incoming thunderstorms brought an abrupt end to the hike just a few minutes after we hit the trail. Pat and I broke away from the group for a quick walk up to the Big Stump; we opted not to complete the loop and as a result we made it back just in time to grab our lunches from the car and take up residence at the picnic tables beneath the pavilion before the sky unleashed a massive storm.

The pavilion turned out to be a peaceful and sheltered place to wait out the rain… though the bolt of lightning that struck the ridgeline a mere ¼ mile (0.4 km) from us gave us quite the scare!

Once the rain calmed enough for us to make a run for the car, we headed out of the mountains and back to Colorado Springs, only to find ourselves driving back through the very same storm that had just passed overhead. I guess this was Mother Nature’s version of irony, as we’d commented not 30 minutes earlier that we’d rather be sitting in a pavilion eating lunch and waiting out the storm than driving in so much rain.

By the time we were back to Colorado Springs, the rain was nice enough to take a break for about an hour and a half (after which we got rained on by the same storm yet again), allowing us to tour Garden of the Gods. I’d been here twice before but Pat never had, so I was excited for him to see this unique and majestic area.

I’ve previously written about Garden of the Gods, so I won’t recap it here. But I will share just a couple photos below, before directing you back to my previous post.

For more photos and information about Garden of the Gods, click here.

7 thoughts on “Shadows of the Past – Florissant Fossil Beds National Monument, Colorado”

Take me back 🏔
Highest peak in Boulder: ✅
Finally got around to participating in the #tendaytravelchallenge that’s been going around Wordpress for the past couple months. To see my photos and make your guesses... link in bio ⬆️
When it’s 62°F in January, we sample a new local brewery
“I wonder if I can do a handstand with snowshoes on?”
Throwing it back on the blog this week to the day last summer that we almost got struck by lightning. Link in bio⚡️