Labor Day weekend 2016 was finally upon us, and Pat and I had an exciting goal to accomplish: summiting the highest point in Vermont. The weather forecast was solid and we’d climbed the highest mountain in Massachusetts the weekend before in preparation. We were ready for this!

Mount Mansfield rises to an elevation of 4393 feet (1339 m) at its highest point, though the ridgeline is long and there are 3 other points along it that exceed 4000 feet. The mountain earned its name because, from a distance, it supposedly resembles a man’s face. There’s the forehead, the nose, the chin, and the Adam’s apple.

For starters, the ridgeline is way too long to be a face. Also, the high points don’t even remotely resemble the facial features they’re named for. Given the average person’s facial structure, you’d think the nose would be the highest point. Not so. It’s the chin. In addition to having the world’s longest face, this guy also apparently has the world’s most prominent chin.

Anyway, the mountain is located within Underhill State Park, a few miles east of Burlington, Vermont. It’s a small and primitive park, with 11 walk-in tent sites and 6 lean-tos; no RVs are allowed. The road into the park is curvy, steep in places, and gravel, but well maintained. Cora (my Corolla… yes, we’re super creative, we named her Cora the Corolla) had no trouble with the drive.

Camping here was a learning experience for us. We’d never stayed at a walk-in campground before, and – as we now know – this definitely requires some planning and foresight. Thankfully they provided wheelbarrows for us to transport our stuff in. That solved one problem.

But the main issue was that we weren’t organized in the right way for walk-in camping, so we spent much of the first evening running back to the car to retrieve forgotten items. Thankfully it was only about 2 minutes away. By day two, we’d gotten the hang of it and figured out how to better organize ourselves for walk-in camping.

(Having some spare tote bags in your car is super useful for this situation.) 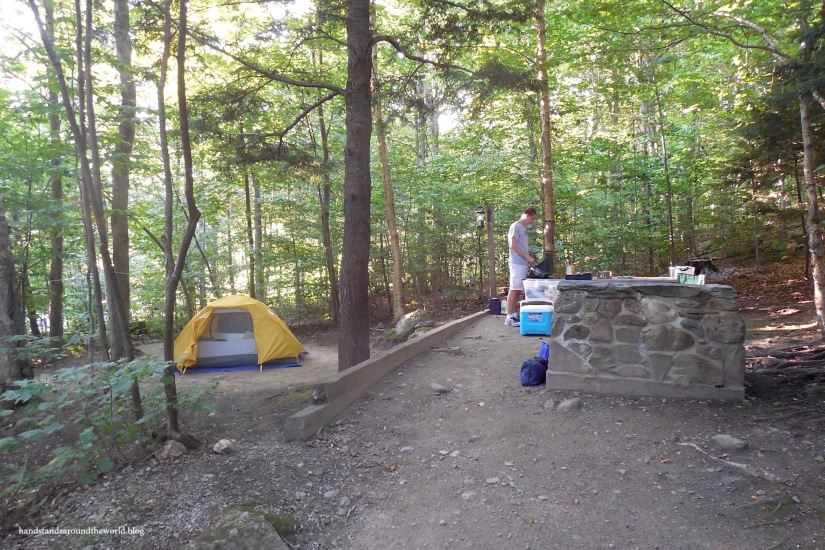 We were in site #7, and it’s the second best site in my opinion (#6 is the best). It was spacious and not too far from the bathrooms, water, or parking lot, but with adequate privacy. In fact, we almost had too much privacy. The sites are very spread out, the tree cover is thick, and it was a new moon; the night was extremely dark and the silence was kind of eerie.

We set off bright and early the next morning for our summit attempt. Conveniently, the trailhead is within walking distance of the campground, so we didn’t have to drive anywhere. For those who aren’t spending the night there, I recommend getting an early start. By about 8 a.m. the parking lot was already full, and by mid-afternoon when we returned, cars were parked back down along the side of the road for probably at least half a mile.

The Sunset Ridge Trail is 6.5 miles round trip (10.5 km) and leads up the west side of the mountain to the ridge, where it intersects with the Long Trail – a 272 mile (438 km) trail that runs north-south through Vermont and traverses the Mount Mansfield summit. There are multiple other routes up, including a toll road and a gondola that ascend from the east side, but Sunset Ridge is the most popular hiking trail and it’s easy to see why. About halfway up, we emerged from tree line and glanced over our shoulders and were rewarded views extending all the way to Lake Champlain and the Adirondack Mountains of New York!

From here, the views only improved as we made our way up the broad, flat rocks towards the summit. Given that so much of this hike involves walking across smooth rock surfaces, I strongly recommend not attempting this trail when it’s wet. It was slippery enough when dry, so I imagine it’d be downright dangerous in the rain. 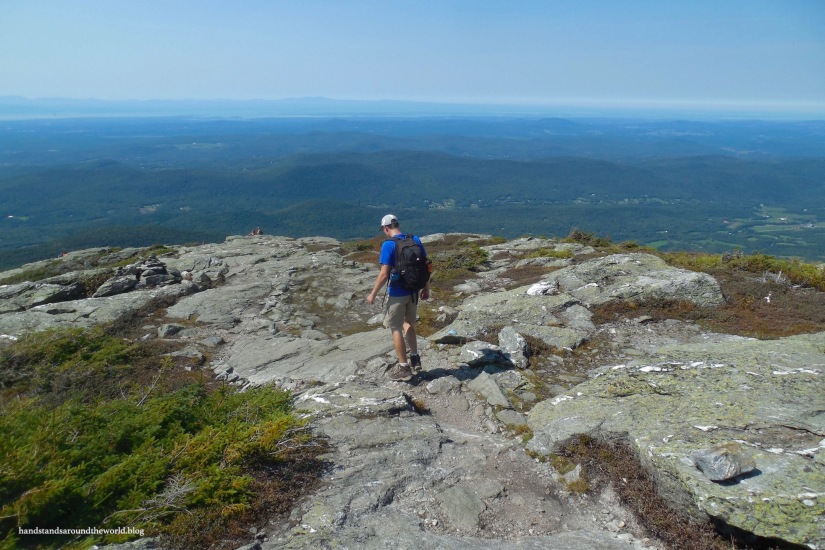 Once we intersected with the Long Trail, it was just a short walk up to the summit. This elevation, coupled with the northern latitude, puts the summit of Mount Mansfield in the alpine tundra zone. This is one of only 3 locations in Vermont in which this ecosystem exists and – as you’re probably aware – tundra is extremely fragile. There are ropes demarcating the trail and there was a park ranger on the summit keeping people from trampling the plants. I’m glad they have someone up there to help protect this delicate environment. 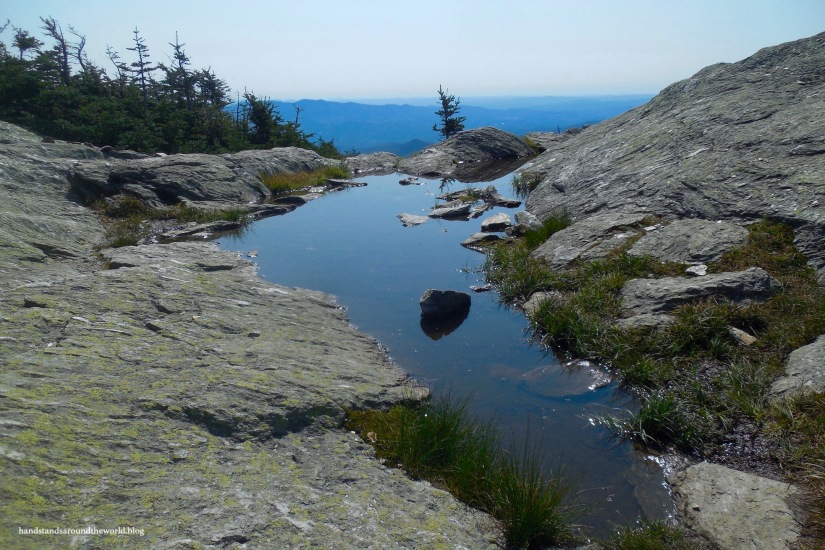 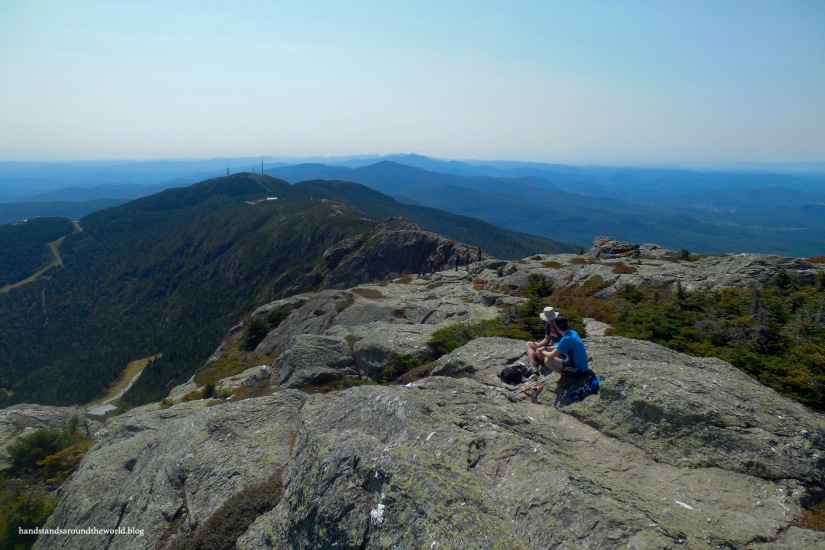 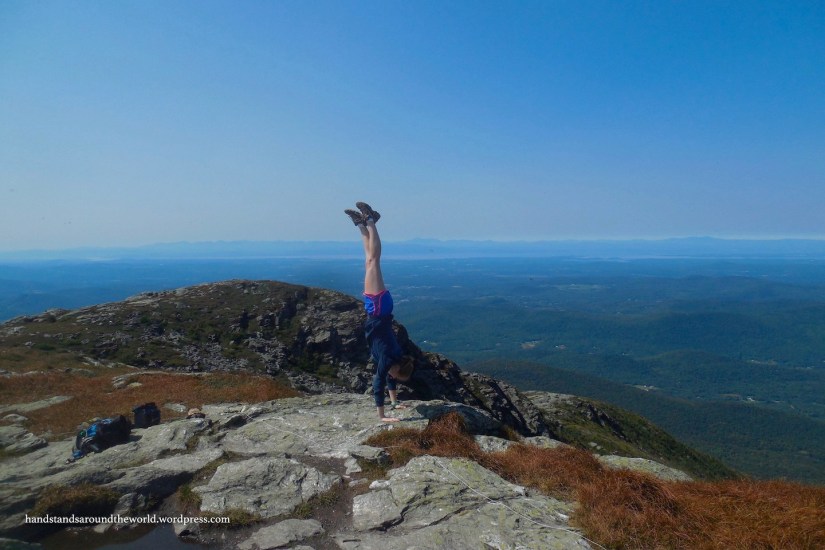 The elevation, coupled with the impending arrival of fall, lent a crispness to the air. This was the only place in New England I ever truly felt like I was breathing in fresh mountain air and it made me realize how much I missed it.

The only downside to this hike was the swarms of gnats on the summit. Another hiker overheard me complaining about them and informed me that they don’t bite. I vehemently disagree, and so did the numerous bug bites I brought home with me as a souvenir.

Of the five New England high points we’ve summited, Mount Mansfield is unquestionably my favorite. The hike was beautiful, the views were unmatched, the air was clean and crisp, and the weather was utterly perfect!

7 thoughts on “On Top of Vermont: Mount Mansfield”

Join 1,141 other subscribers
Follow Handstands Around the World on WordPress.com