After a stunningly beautiful 24 hours at the Maroon Bells, we packed up camp and headed south to Black Canyon of the Gunnison. I’m not sure what I was expecting Black Canyon to be, but it was wildly different from my expectations… in a good way.

In my mind, I guess it was a mini Grand Canyon. But the similarities between the two are few. The Grand Canyon is massive, long, wide, and red, with multiple layers of limestone, shale, and sandstone that span 70 million years of geologic history. Black Canyon is cut through jagged layers of black schist and gneiss that are 2 billion years old! Over time, bands of pegmatite worked their way through cracks in the rock, painting the walls of this deep, narrow canyon with haphazard stripes of pink.

Meanwhile, the Gunnison River has been determinedly wearing away at the rock for the last 10-15 million years. The river drops an average of 34 feet per mile (6.4 m/km) through the canyon, which is nearly 5x as rapid of a loss of elevation as the Colorado River as it flows through the Grand Canyon. The result is a canyon that is 2250 feet (690 m) deep at its tallest point and only 40 feet (12 m) wide at its narrowest point! In short, Black Canyon has very little in common with the Grand Canyon.

It’s also one of the lesser visited locations in Colorado, especially the north rim of the canyon. This is where we began our explorations.

Our first stop was the campground. As they don’t take reservations and there are only 14 sites, I was nervous about finding a spot. I’ve realized I’m terrible at winging it when it comes to traveling; I prefer the certainty that comes with having a guaranteed place to pitch our tent every night. As it turned out my nervousness was warranted. There were about 6 spots remaining when we arrived around lunch time but the campground filled within a couple hours. 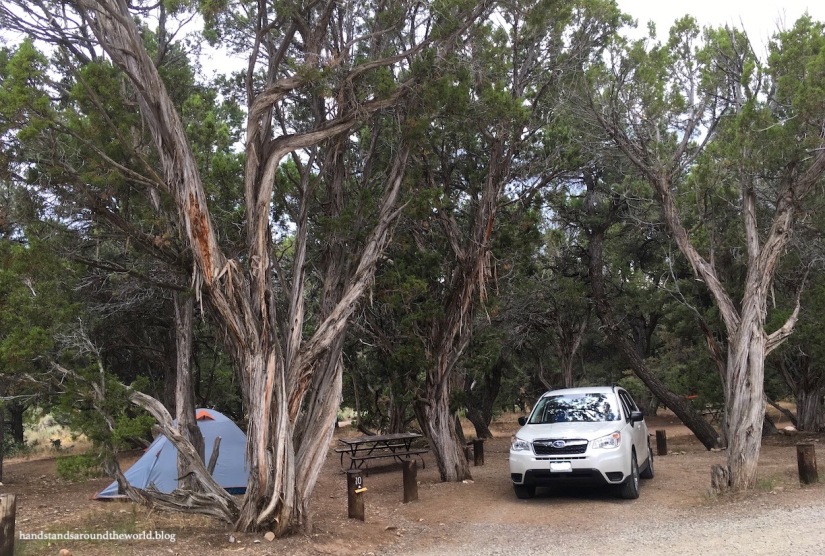 However, the lack of visitors and amenities on this rim results in a lack of park rangers. We never saw one. The ranger station was closed the entire time and no one ever showed up to clean the bathrooms… which was a problem. The one at the ranger station had poop on the seat (like… how does this even happen?) and by morning both pit toilets in the campground had run out of toilet paper.

Anyway, there isn’t a lot to do on the North Rim and one day here was sufficient. We drove the North Rim Road, stopping at each viewpoint. 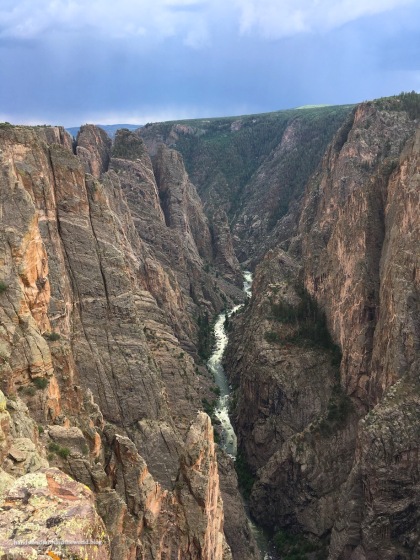 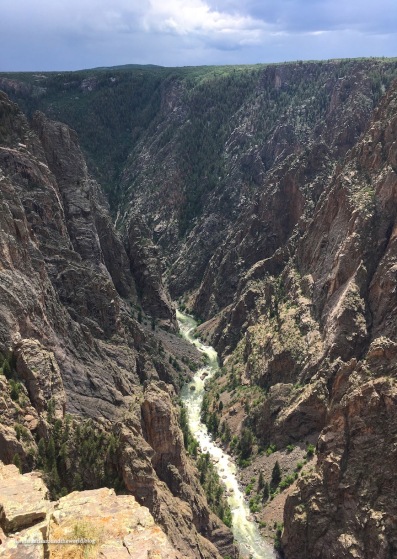 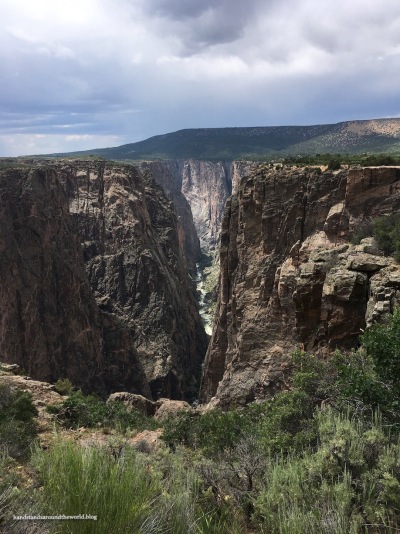 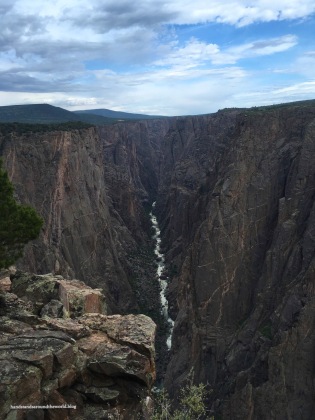 We also did a late afternoon hike out the North Vista Trail to Exclamation Point (photo at left). And yes, that’s its real name, so we all spent the last portion of the hike silently thinking up an appropriate exclamation for when we arrived at the viewpoint. I can’t recall what they were but I promise you they were all pretty cheesy.

And lastly, we walked the Chasm View Nature Trail behind the campground just in time to catch a bright and colorful sunset! 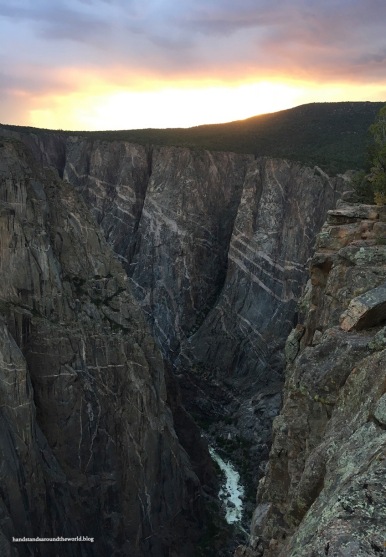 After spending a full day exploring the North Rim, we headed out and around (a 2-3 hour trip) to the South Rim. This is the more heavily visited part of the park, but Black Canyon is still relatively quiet and undiscovered as compared to other national parks. It’s also fairly remote, with no cellphone service or other amenities in the park.

We had reservations at South Rim Campground which is set amongst the Gamble Oak shrubs that abound on both rims of Black Canyon. South Rim Campground also happens to currently be the fawning ground for the local deer population, and mother deer can be highly aggressive. People have actually been attacked. Because of this it’s important to keep your distance if a deer comes into your site. Also, for most of the summer season dogs are not allowed off-leash anywhere in the campground and must stay in your site (they’re not even allowed on the campground roads or trails). We did have a couple deer show up in our campsite, but we retreated and they minded their own business and we didn’t have any issues.

After setting up, our first stop was the visitor center, which is built right on the canyon rim! 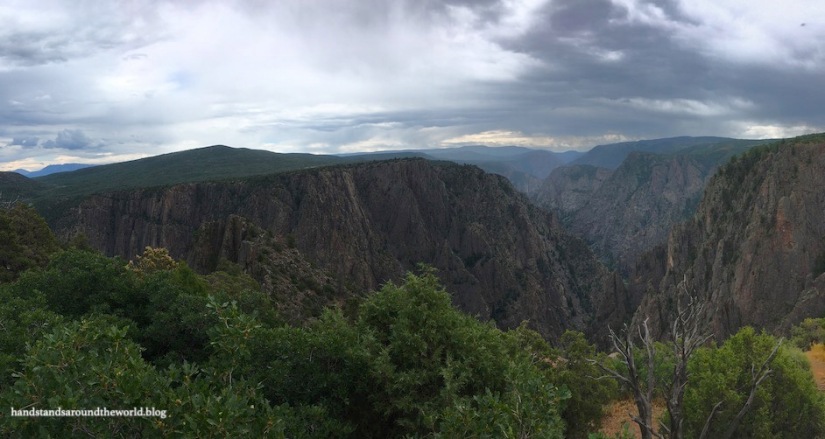 Views from the Visitor Center

Next we headed east along East Portal Road. This is the only place in the park where you have the option to drive all the way down to the river… down a very steep gravel road (RVs and trailers not allowed). It was a much different perspective than that from the canyon rim.

On day 2, we headed west along South Rim road, stopping at the many viewpoints and then hiking out to Warner Point from the very end of the road. This 1.5 mile (2.4 km) hike provided a very different perspective of the canyon as well as views west into Montrose and south towards the San Juan Mountains.

The canyon wall on the right is called the Painted Wall 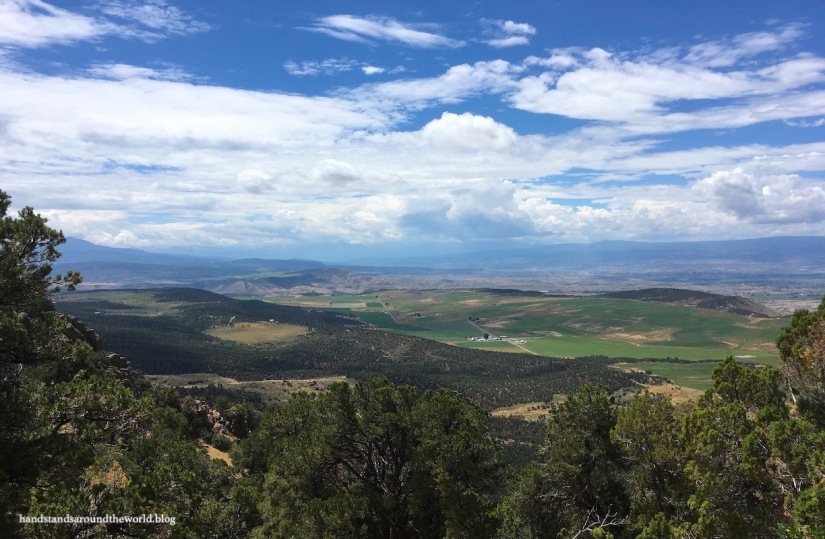 We wrapped up our afternoon with delicious Hefeweizens (a regular one and a grapefruit one) from Horsefly Brewing Company in Montrose while the late afternoon summer thunderstorms raged overhead, and made it back to the visitor center in time for a very colorful sunset! 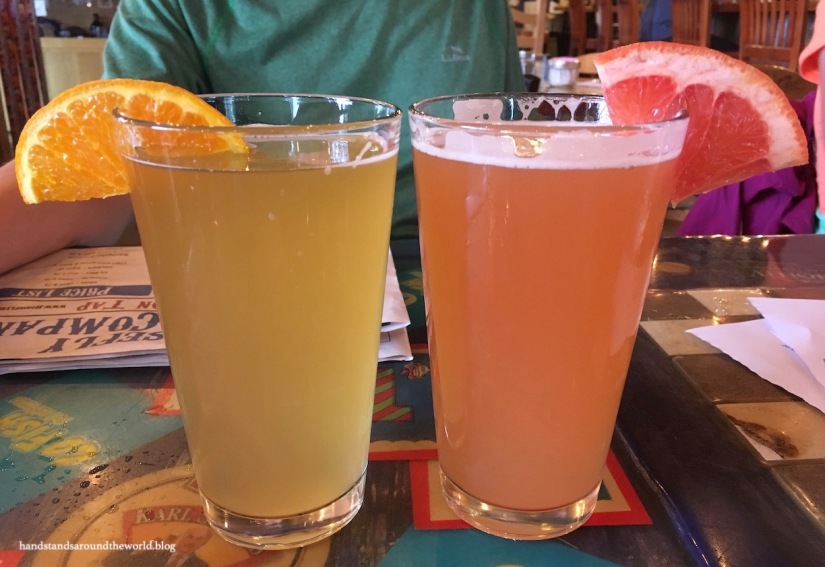 Overall, I really enjoyed Black Canyon. It was very different from what I was expecting, and the true magnitude of the sheer canyon walls cannot be captured in photos. You really have to be there, standing on the edge gazing down into this endless chasm, to appreciate the wild, beautiful, and utterly destructive power of Mother Nature. 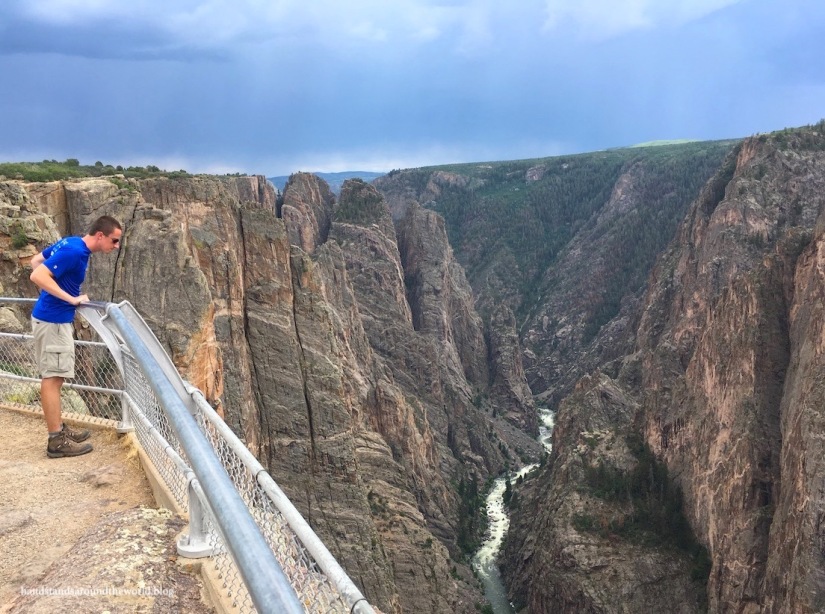