In my quest to summit all the state high points of the northeast, Mount Washington long seemed so out of reach. It was a 4-hour drive from our house, making it too far for a day trip. It was even really too long for a normal weekend trip, considering it takes a whole day to summit the mountain. Plus, weekends there are excessively crowded, which isn’t appealing.

And then there’s the fact that Mount Washington is home to the “worst weather on Earth.” Something about the fact that it’s located right where the Jet Stream meets another air current. Someone once explained it to me, but don’t know enough about meteorology to fully understand.

What I do know is that, to this day, the summit of Mount Washington holds the record for the highest wind speed ever recorded outside of a hurricane: 231 mph (372 kmh)!

Now, I’m sure a person who has spent any time in Antarctica or the North Pole would argue with the “worst weather on Earth” designation. And I think they’d be making a valid point. But Mount Washington is indeed home to some extremely unpredictable weather. At 6288 feet (1916 m), the summit is always cold and windy and usually in the clouds; this is the other reason that a weekend excursion to summit this high point isn’t an ideal strategy.

Someone once told me that the best way to summit Washington is to give yourself a 3-4 day window. We decided to heed this person’s advice and booked a 4-night stay, giving the weather 4 chances to cooperate with us.

It vaguely did. But more on that later.

Mount Washington is not only the highest point in New Hampshire, but also in New England and, actually, the entire northeastern US. East of the Mississippi River, only a couple mountains in the southern Appalachians are taller. Washington, however, has the greatest prominence. We’d climbed all the other New England high points (except for Maine) but this was “the big one.”

There are multiple routes up Mount Washington, and all have their pros and cons, I’m sure. They’re all at least 4 miles (6.4 km) long with approximately 4000 feet (1220 m) of elevation gain. This is not an easy hike.

We took the 4.2-mile (6.7 km), 4200 foot (1280 m) elevation gain route up Tuckerman’s Ravine. The pro of this route is the views, while the con is that it’s the most popular route to the top. Fortunately, we climbed the mountain on a Wednesday, so the trail itself wasn’t crowded. We spent about half of the hike in the clouds, so I can’t fully attest to the views, but the glimpses we caught in between the waves of fog were very nice.

From the parking lot at Pinkham Notch Visitor Center, Tuckerman’s Ravine trail begins to ascend gradually. It’s a wide trail that’s easy to follow, and everything is well signed. About 10 minutes in is Crystal Cascade. 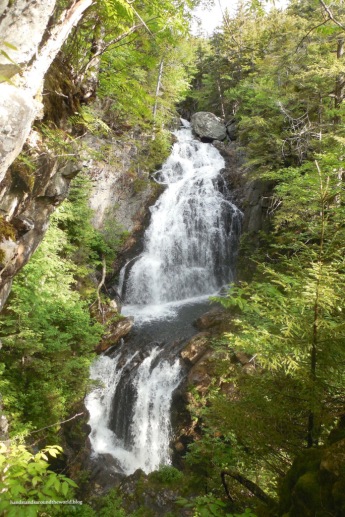 The trail is a mix of dirt and rocks for the first couple miles as it climbs up towards Tuckerman’s Ravine, crossing a few streams and meandering through a mixed deciduous and pine forest.

This portion of the hike was a lesson in pacing ourselves – it wasn’t excessively steep, but was a steady climb, and we knew the worst was yet to come. We didn’t want to tire ourselves out early on, so we were careful to keep a slow but steady pace. The first couple miles took us about 1 hour, including the stop at Crystal Cascade.

At approximately the halfway mark, the terrain begins to change: the trees become shorter and the rocks become larger as you approach Tuckerman’s Ravine. This is also when our pace slowed drastically. Most accounts of this hike say it will take 6-8 hours round trip, and in fact it did. That’s because the last 2 miles (3.2 km) are essentially a scramble; it took us more than 2.5 hours to complete them.

Tuckerman’s Ravine is a large bowl that’s an incredibly popular spot for downhill skiers in the winter. It’s so steep, I’m not sure how people ski down it. I’m 100% certain I’d just tumble. Then again, I’m not a very skilled downhill skier. 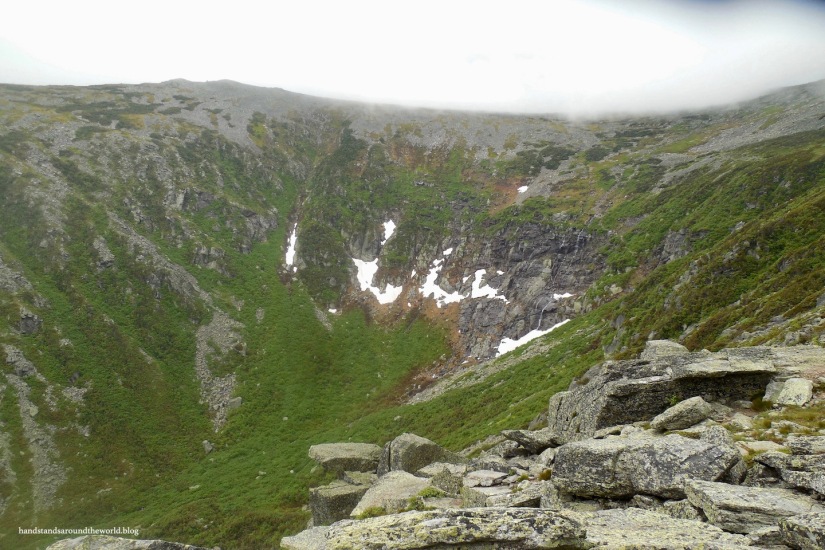 Anyway, the trail cuts across the ravine and then climbs fairly straight up and over the headwall. At this point, the trail is marked by yellow blazes placed periodically on the boulders over which we were walking. There are some creek crossings, and quite a bit of water was still tumbling down the ravine from the remaining snow fields.

Once we huffed and puffed our way above tree line and over the headwall, we found ourselves in the clouds. Clouds that would never lift from the mountain on this particular day. I stopped here to put on a long-sleeved shirt; about 10 minutes later it was completely wet from walking through clouds and I had to switch to my rain jacket. My advice: bring multiple waterproof layers of clothing.

From the top of the headwall, the boulders become even larger and the trail is marked mostly by cairns. It’s recommended to turn back if visibility limits you from seeing the next cairn. I can see why we received this advice – walking across this giant field of boulders would’ve been extremely disorienting without the cairns to keep us on track.

The photos below give a general idea of how steep (and cloudy) a hike this was. 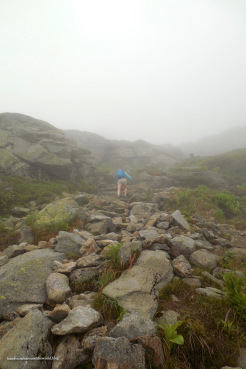 Finally, after 4 hours of climbing, we made it to the summit! We couldn’t see a thing and the wind was even stronger. We had to fight our way through it as we walked around the summit, reading signs and visiting all the buildings (in addition to the museum and visitor center, there are weather stations up there).

No matter what route you take to the top, the summit will be busy. There’s a road and also a cog railway to the top of Mount Washington. We arrived all windblown, soggy, and bundled up in multiple layers of clothing, and found ourselves surrounded by people looking perfectly made up. That was a little annoying.

Anyway, we retreated into the warmth of the Mount Washington State Park visitor center to eat our lunch, and took advantage of the café to buy some hot tea. There’s a post office too, so we mailed my sister a plain greyish-white post card captioned “Mount Washington in the Clouds.”

Sadly, it was a fairly accurate depiction of our view.

We spent about an hour and a half on the summit before heading down, knowing that afternoon thunderstorms were a real possibility. Thankfully the thunder held off, so we didn’t get struck by lightning. We did, however, get sleeted on. And rained on. So that was fun.

Actually, the precipitation made parts of our descent downright treacherous. Climbing down giant rocks is hard enough. Climbing down giant wet rocks was very difficult, and it slowed us down tremendously. We had a few slips and one fall, but we all made it down in one piece.

Rather than follow Tuckerman’s Ravine all the way down, we split off onto the Lion’s Head Trail about 0.8 miles (1.3 km) below the summit. This trail stays along the ridgeline above the ravine, leading out to the rocky Lion’s Head before dropping back down. In between the rain and sleet, we were able to glimpse a few views during our descent. 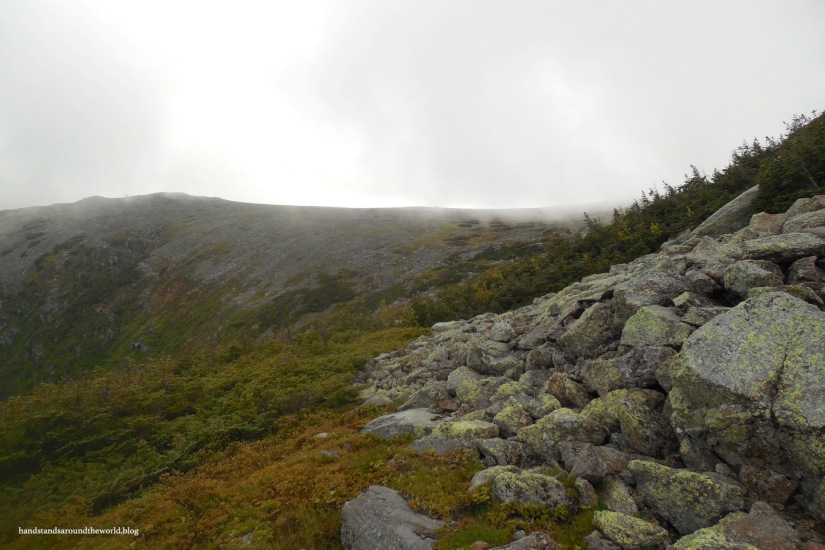 Since it was dry on the way up and soaking wet on the way down, I can’t accurately compare the two trails. But what I can say is this: going down was much more difficult for us than going up. At least, for my mom and me. Pat – with his long legs – was mostly just meandering down the mountain; meanwhile, my mom and I were using all four limbs and still sometimes having to stretch into awkward positions in order to navigate our way over the rocks.

My hands were raw by the time we made it down below tree line and out of the seemingly never-ending boulder field. I’d recommend bringing sturdy, waterproof gloves that allow you to grip the rocks but will still keep your hands warm and dry.

Once we dropped down off of Lion’s Head and back to Tuckerman’s Ravine trail, we left the rain behind for the rest of the hike. Normally, we can hike down something in about half the time it took us to climb up. Not so with Mount Washington. The descent took us a full 4 hours as well. Rock hopping is just not conducive to a fast pace.

Neither was the state of our leg muscles by this point in the hike. My ankles and feet were killing me, and my legs were having to work really hard to help me keep my balance on all the rocks, roots, and uneven footing. We had grand plans to hike the 0.6 miles (1 km) round trip to Glen Ellis Falls on our way out of Pinkham Notch, but in our pathetically exhausted state we couldn’t even muster up the energy to walk that short distance.

By the next day, I was sore everywhere. But we did it!

Obviously, a small part of me is disappointed that the clouds never lifted and we couldn’t see anything from the summit. But we climbed to the top of the tallest mountain in New England, and that’s something no one can ever take away from us!