It was March 2018, and reality was really starting to catch up to us as we searched for apartments in Denver and collected quotes from moving companies and I began spending all my free time applying for jobs.

But the most pressing matter (priorities, right?) was that our “Before We Leave CT” to-do list still had quite a few entries on it, including “Summit Mount Marcy.” Having conquered Bear Mountain, Mount Greylock, Mount Mansfield, and Mount Washington, this was the only high point left on our northeastern to-do list.

(Not counting Katahdin which, as I’ve mentioned before, wasn’t logistically possible with our school schedules. That one remains on a future to-do list.)

So I booked a campsite in the Adirondacks for the end of May and we crossed our fingers that the weather would cooperate.

Actually, the weather during our trip was pretty ideal: mostly sunny, 70s, minimal rain. We would’ve had a perfect day to climb a mountain… if only we’d owned snowshoes and crampons and had any significant experience with winter mountain climbing.

Admittedly, when I first began to plan this trip I’d been concerned about the feasibility of making it up Marcy in May. But I did my research and – by most accounts – we were at risk of a lot of mud and the infamous black flies for which the Adirondacks are well known, but not any significant snow. Given the relative lack of winter we’d had up to that point, I figured our chances were probably pretty good.

And then, about two weeks after I made the reservations, winter finally arrived in the northeast. And lingered for far too long. As a result, the trail conditions 3 days before our planned departure showed multiple feet of snow above 3,000 feet (915 m). The summit of Marcy is over 5,000 (1500 m).

Needless to say, our summit attempt was not to be.

Fortunately, the Adirondacks are an outdoorsman’s paradise so – frustrated though we were – we were easily able to find some other ways to spend our time.

We began our trip at Paradox Brewery in Schroon Lake, New York, which was temporarily located outside in a trailer and under a giant tent while they built a new location down the road. They had 5 beers on tap and we sampled them all. I’m not an IPA fan and 3 of the 5 were fairly hoppy ales, so it’s not my favorite beer I’ve ever had. But it wasn’t bad.

Next stop, just up the road, was a quick hike up Mount Severance, also sometimes called Severance Hill. Either way, double check your directions before you decide to blindly follow your GPS to the trailhead, because it may not get you there. Ours took us right past the parking area – which we didn’t see because, despite what my trail directions said, the sign is neither large nor excessively visible – and onto the interstate, and then instructed us to just pull over onto the shoulder and park. From there, we were apparently supposed to jump a guard rail and a fence to begin our hike.

(We ignored her instructions and eventually found the actual parking area.)

Mount Severance is only about 1600 feet tall (490 m) and a 2.4 mi (4 km) round-trip hike; it took us maybe an hour, including a few minutes at the top enjoying the view of Schroon Lake.

Unfortunately, the annoying swarms of gnats chased us off the summit more quickly than we would’ve liked. We managed to miss black fly season – presumably because winter had persisted so long – but the stupid little gnats that insisted on flying directly into my eyeballs were out in full force for the entirety of our trip.

We spent the night at Sharp Bridge campground, off Highway 9 in North Hudson, New York. It’s a fairly small campground that was barely half full when we arrived (reservations clearly had been unnecessary). When we pulled back into the campground for our second night, we were shocked to see that everyone else had moved on. It was looking like we’d have the entire campground to ourselves, a thought that made both of us a little nervous.

I’m obviously a fan of the outdoors and of camping, but I’m also a fan of having at least a couple other people in the general vicinity so that if I scream, there’s someone there to hear it. So I was moderately wary about being by ourselves in the woods in an area known for abundant black bears.

Pat, on the other hand, was most concerned that the campground attendant was some kind of psychotic, axe-wielding murderer.

Both of our concerns ended up being unfounded; mine because another group eventually showed up and Pat’s because the campground attendant was apparently a non-psychotic, non-axe-wielding type of human.

Day 2 in the Adirondacks brought sunshine and bright blue skies, the perfect backdrop for our day of waterfalls. We began with a visit to High Falls Gorge, which was somewhat of a smaller and shorter version of Flume Gorge in New Hampshire. We paid our admission fee and then walked the half mile (0.8 km) boardwalk that dips down into the gorge before crossing it on a (very high) bridge and leading back along the rim on the opposite side. There’s a series of waterfalls along the way, as well as multiple potholes worn into the rocks from millions of years of swirling, rushing water. 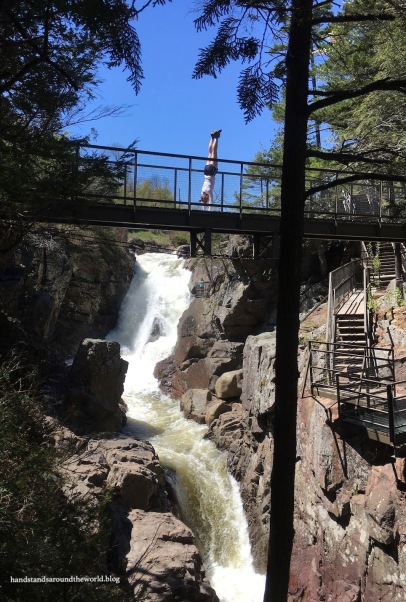 Our next stop was the Roaring Brook and Giant Mountain trailhead to visit Roaring Brook Falls. It’s an easy 0.6 mi (1 km) round-trip hike to this decently tall waterfall, though the terrain makes it a bit difficult to actually see the entirely of the falls. Be prepared to do some rock hopping for better photos. Or, if you’re me, do some rock hopping and still end up with a pretty crappy photo…

Right across the road from this trailhead is the parking area for the Adirondack Mountain Reserve (AMR). Adirondack Park, unlike most other US parks, is managed by many different agencies; the New York State Department of Environmental Conservation, the Adirondack Park Agency, and the AMR, to name a few. Some of the land is public but some is also private. The AMR is an example of the latter.

Because of this, only authorized vehicles are allowed beyond the AMR parking area; hikers must begin by walking up the road a good distance to the trailheads. For us, the hike to Beaver Meadow Falls and Rainbow Falls included about 3 miles in each direction on the road, plus an additional couple miles on trails.

The Beaver Meadow Falls trail breaks off from the road just below a small dam, behind which lies what is quite clearly beaver habitat. Given the name of the falls, I mistakenly assumed that the 3 foot (1 m) drop of water over the dam was the waterfall and began an annoyed rant at having hiked so far just to see that.

Wisely, Pat suggested we continue up the trail and then proceeded to laugh at me when we came upon the actual waterfall just a couple minutes later.

From Beaver Meadow, our trail directions had us follow the narrow, rocky trail up the river to the Rainbow Falls turnoff rather than backtracking to the road. In retrospect, we should’ve backtracked. The trail was not easy going and at times difficult to spot. Also, I’d been forewarned about the Adirondack mud season, but I don’t think I fully comprehended what this meant until I found my brand new hiking boots submerged in the stuff as we slipped and stumbled our way along the banks of the East Branch of the Ausable River.

I’ll admit, prior to beginning this hike we’d debated whether it was worth it to hike 9.5 miles (15 km) round-trip to see a couple waterfalls, but I can say with absolute certainty that Rainbow Falls is worth the hike, especially in the spring when the water levels are high. We arrived late in the afternoon, which was terrible timing from a photography perspective. Having the sun right above the brink of the falls may have detracted from the quality of our photographs, but it certainly didn’t detract from the beauty of the falls. 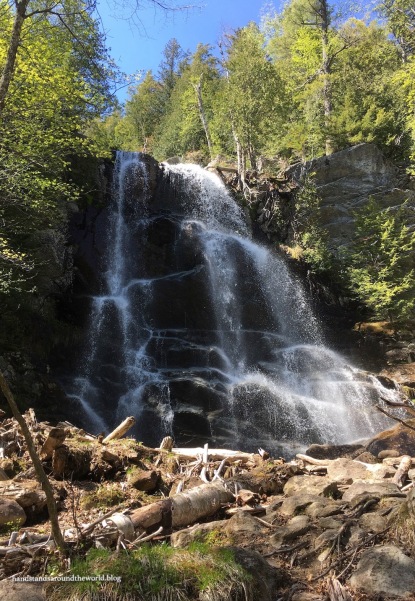 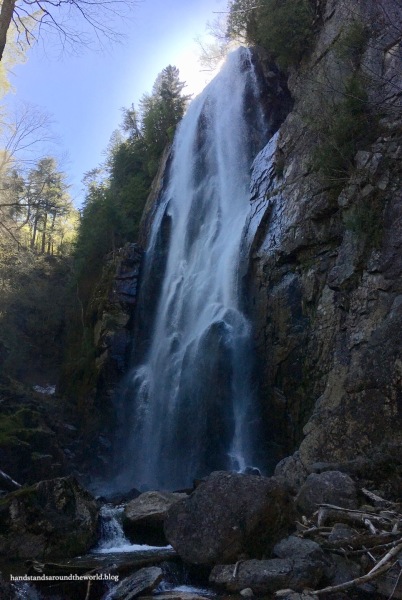 The next morning, after packing up our campsite, we stopped for a few hours at Fort Ticonderoga, located on a peninsula along the western shore of southern Lake Champlain. Originally built by the French in 1755 and named Fort Carillon, Ticonderoga changed hands many times over the course of the next 30 years.

Ticonderoga was strategically located during both the French and Indian War and the American Revolution, due to its position between Lake Champlain and Lake George. Despite its prime location, though, it spent much of its tenure as merely a supply station and staging area and eventually was left unoccupied and fell into disrepair.

In 1758-1759, the British attacked Fort Carillon twice; the first attempt ended in a crippling loss, but during the second they successfully took the fort and renamed it Ticonderoga, an Iroquois word meaning “between two waterways.”

The British controlled Ticonderoga for 16 years until an attack in 1775 by the Green Mountain Boys – under the command of Ethan Allen – and Benedict Arnold. The Americans retained control of the fort for approximately 2 years. However, Ticonderoga had one glaring weakness: the summit of Mount Defiance, which rose some 800 feet (245 m) behind Ticonderoga, was neither fortified nor guarded because the terrain appeared too difficult for anyone to get cannons up to the summit.

Unfortunately, the British were able to drag a couple cannons up Mount Defiance in 1777. The Americans – who had moved some of their cannons from Fort Ticonderoga to Boston a few months prior – suddenly found themselves under siege and surrendered the fort before a single shot was fired. A subsequent attempt to recapture it failed so the British remained in control until their ultimate surrender at nearby Saratoga.

Today, the fort has been restored and is open for self-guided tours, guided tours, and other activities (musket firing demonstrations, etc.). There is a large museum in the upper floors of the two main buildings, filled with a complete history of the fort and the wars, models, dioramas, objects recovered from the ruins of the fort, and one of the largest collections of ammunition in the United States. 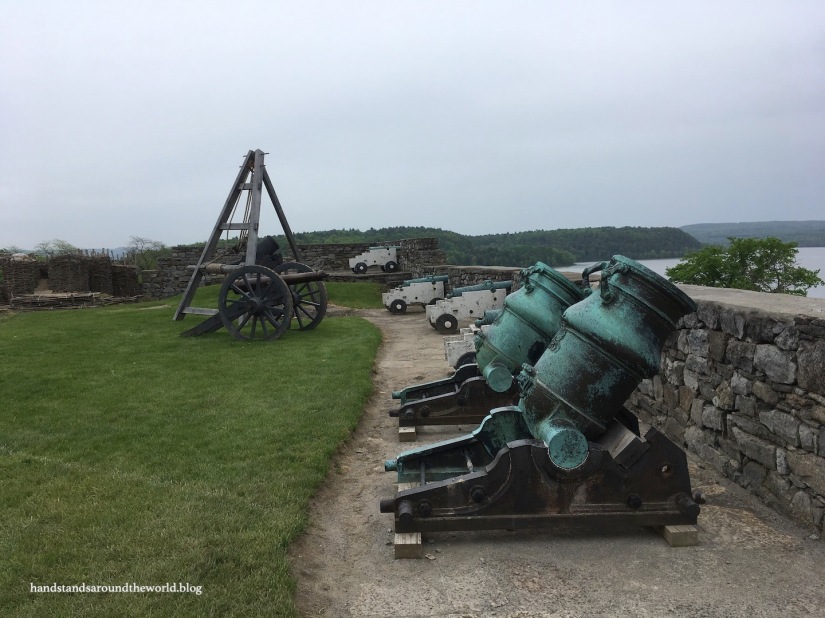 It rained on and off as we explored the fort, but we really enjoyed our time at Fort Ticonderoga. Included with admission is a drive up Mount Defiance, from which we could clearly see how much of an oversight it had been to leave this high point unguarded.

And this completes our time in the Adirondacks. For now, at least. We’ll definitely be back one day. After all, Mount Marcy remains on the to-do list for the future.

3 thoughts on “Springtime in the Adirondacks”