In summer 2014, a friend of mine went to Lake George and posted photos of the trip on Facebook. She and her family had hiked up to a high point and the view from the top was of a large blue lake dotted with luscious green islands. I went home that day and added Lake George to my travel list. A couple years later, we snuck away for a long weekend at this beautiful destination!

Lake George is a large lake in the Adirondack Mountains of upstate New York. It’s a very popular spot for recreation and fortunately much of the area surrounding it is available for public use. We snagged a last-minute campground reservation at Hearthstone Point, packed up the car, and headed off.

One important thing to note about Hearthstone Point Campground: it straddles the busy Highway 9, so site location is key. When I read reviews before booking, the trend was that people on the lake side complained about road noise and beach noise and people on the opposite side said it was nice and quiet. We heeded their warnings and picked a larger site tucked way in the back… and we loved it!

Before we arrived at our campsite, we did a bit of exploring of the town of Lake George. We started at the Adirondack Brewery for a tour and tasting, which was a lot of fun and they had some very unique beers. I’m not usually an IPA person but their tangerine one was delicious!

Next, we headed across the street to Lake George Battlefield State Park to learn a bit about the local history. The park encompasses various monuments and statues, the old earthen Fort George, and other land along the lakeshore.

The lake itself was originally called Andiatarocte by the Mohawk Indians, which translates to either “where the mountains close in” or “place where the lake contracts,” according to different sources. It was later named Lac du Saint-Sacrement by French Jesuit missionary St. Isaac Jogues in 1646 before being dubbed Lake George in 1755 by General Sir William Johnson, in honor of King George II.

Fort George, which was manned during the Revolutionary and French & Indian Wars, has quite a brutal history. The most famous battle occurred in 1757 when this fort and the nearby Fort William Henry, then under British command, were taken by French Major General Louis-Joseph de Montcalm and his 8000 men. The battle was actually more of a massacre and is the subject of the famous James Fenimore Cooper novel Last of the Mohicans.

Finally, it was time to hike up Prospect Mountain for some views. There used to be a cog railway up to the top; today there’s a toll road and a couple (non-toll) trails. We took the Prospect Mountain Trail and it was a steady climb. Some parts were extremely steep… the kind of thing where, on the way down, you’re questioning how you managed to climb up it. This made me feel a little better about the amount of huffing and puffing that happened during the ascent.

The next day, we drove around the eastern shore of Lake George to Shelving Rock State Park. This small park was quite a distance back into the woods on a gravel road, but once we arrived it was just a short walk down to Shelving Rock Falls. It’s a good swimming spot, which we unfortunately didn’t realize so we didn’t have bathing suits.

Our plan was to eat lunch here and then climb up to Shelving Rock Summit, but instead we followed the trail out to the lakeshore, and it was so pretty we ended up just meandering a good distance along the shoreline in both directions and relaxing in the sunshine. 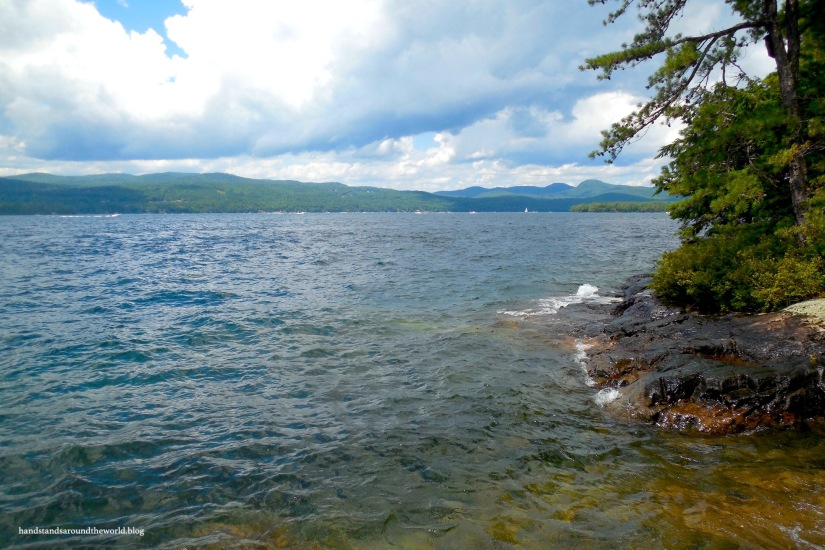 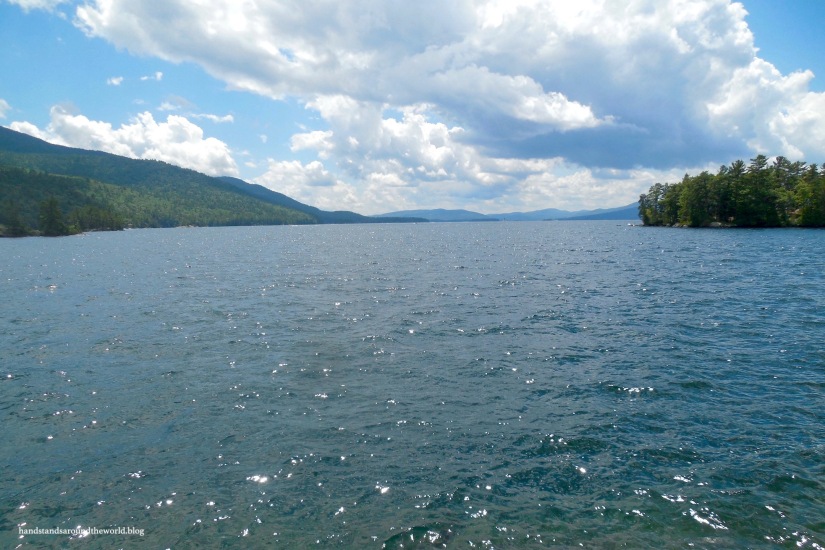 Back at Hearthstone Point, we wrapped up our weekend with some sunbathing and swimming at the beach. I’m not much of a sunbather – I get bored after about 20 minutes and I burn very easily – so we probably didn’t stay more than an hour. But it was nice and relaxing.

We really enjoyed our weekend at Lake George and I highly recommend a visit if you’re ever in the area. It’s also a popular destination for boaters, and the town of Lake George has plenty of shopping and restaurants, so there’s a little something for everyone!