Curecanti National Recreation Area is largely a boating destination and remains, it seems, relatively unknown outside of boating circles. We don’t own a boat, but if you’re anything like us then you might be excited to learn that Curecanti just so happens to have one that you can ride. For a fee, of course.

The 1.5 hour Morrow Point boat tour departs twice a day in the summer from the Pine Creek Dock and travels 7 miles (11 km) up the Gunnison River. Tickets must be reserved in advance and cost $24/person. This was a pricey excursion for us, but one that was absolutely worth it.

It’s a ¾ mile (1.2 km) hike down to the boat dock from the Pine Creek parking lot, so it’s recommended to depart for the tour no less than 45 minutes in advance to assure you’re there in time for boarding. There are bathrooms in the parking lot and at the dock, but there is no water so be sure to bring all you’ll need for the hike and the tour. 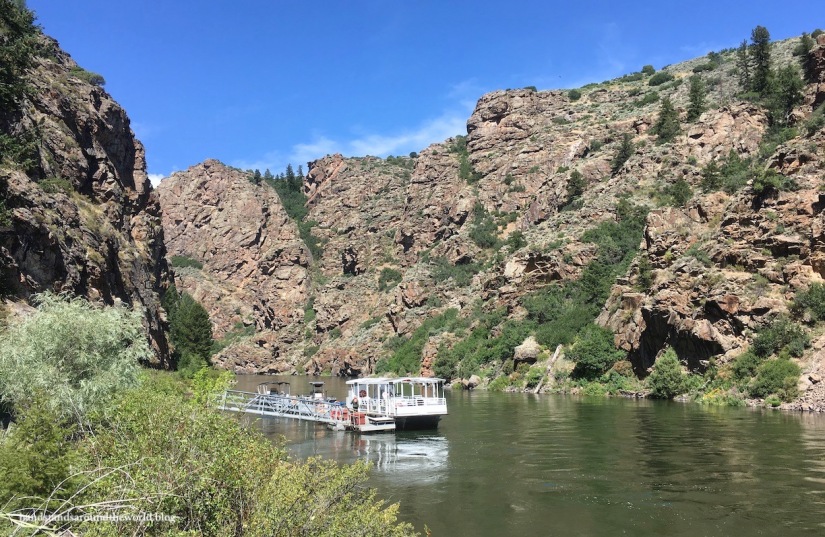 The tour boat is open on all sides but partially covered overhead in case of rain. We didn’t get rained on but low hanging clouds shrouded the landscape when we set off. Fortunately, the sun finally won its battle about 30 minutes into the tour, and the remainder of our time on the boat was beneath bright blue skies. 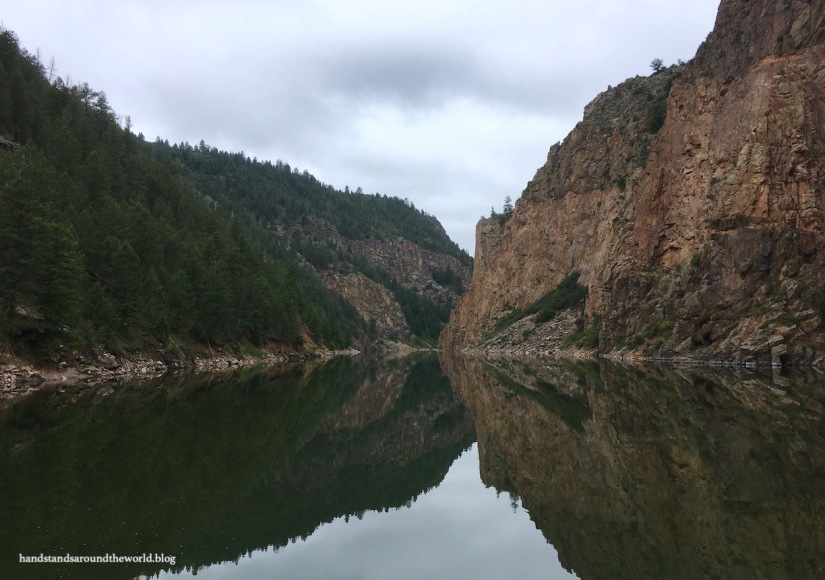 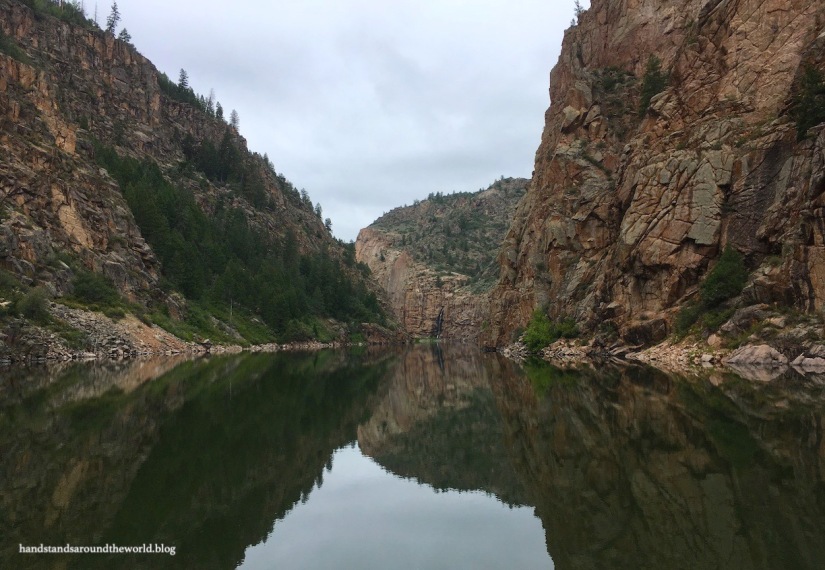 Highlights of our boat tour – in addition to the thorough geology lesson we received from the on-board ranger – included two bald eagles and a great blue heron. Geologically speaking, the highlight was the up-close views of the layered canyon walls and the Curecanti Needle, which we were able to see from many different angles as the boat headed down Morrow Point Reservoir, turned around, and made its way back to the dock. 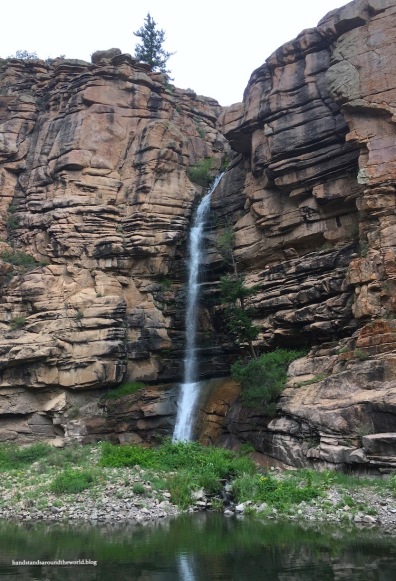 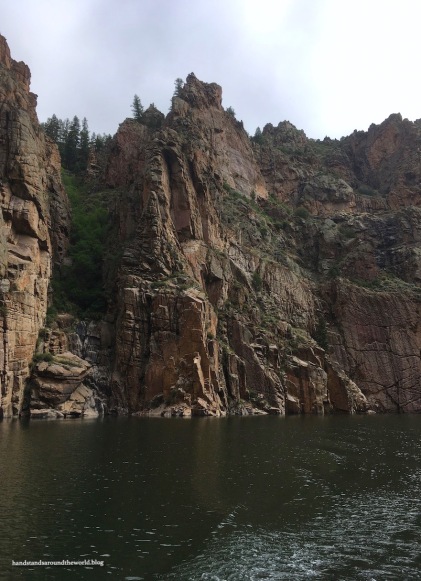 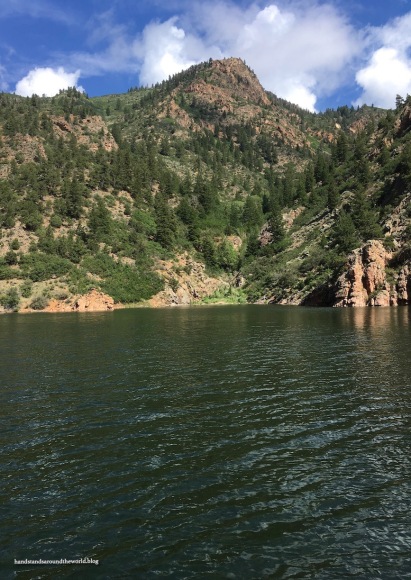 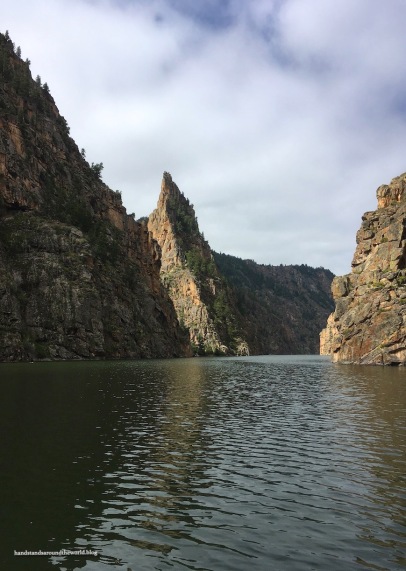 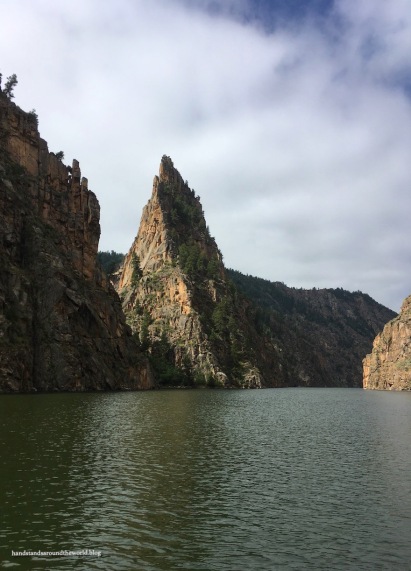 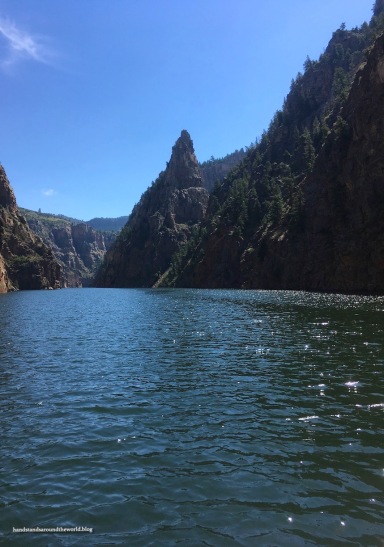 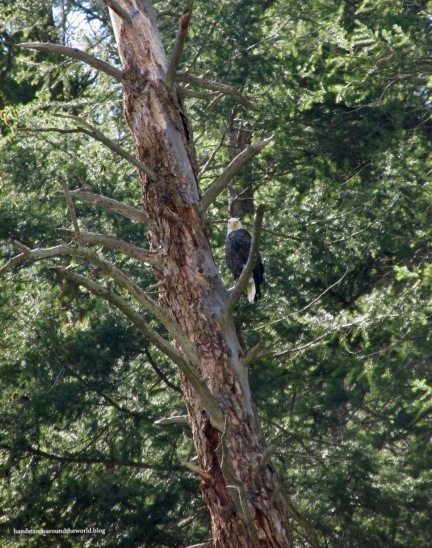 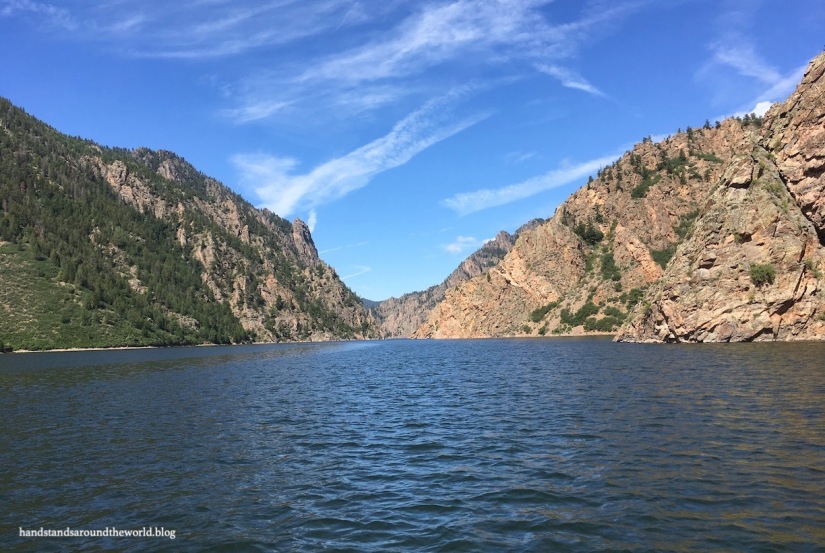 Morrow Point Reservoir is one of three sequential reservoirs in Curecanti, bordered to the west by Crystal Reservoir and to the east by Blue Mesa Reservoir. Both Crystal and Morrow Point look more like slow-flowing rivers between the towering rock walls of Black Canyon… though as you could see from the photos above, the walls here are neither as tall nor as sheer as downstream in Black Canyon National Park.

Blue Mesa Reservoir, on the other hand, is the largest of the three and also the largest body of water in Colorado. The main highway parallels the reservoir for most of its length, which really emphasizes how enormous a body of water it is. There are boat ramps, picnic areas, and a few campgrounds along the way.

We had reservations at Elk Creek Campground, which isn’t home to any elk, but it is home to a whole bunch of lakeview campsites. 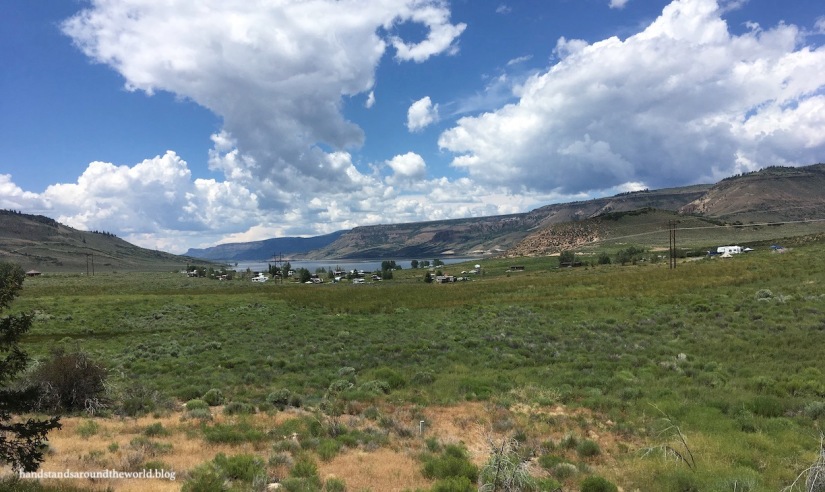 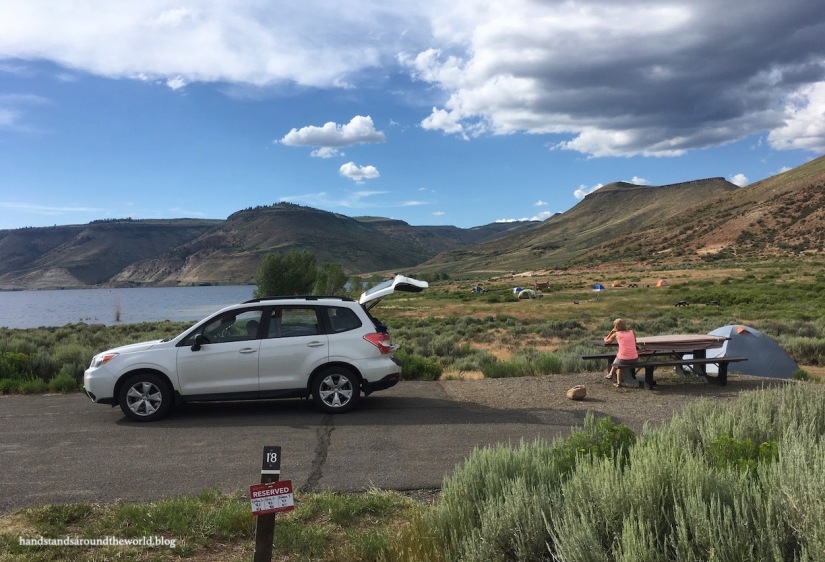 It was the middle of the day when we arrived and it was blazing hot and none of us felt like frying at a picnic table. There wasn’t any shade in our site – or in most of the campground, for that matter – so we just made our own and had a picnic lunch on the ground! 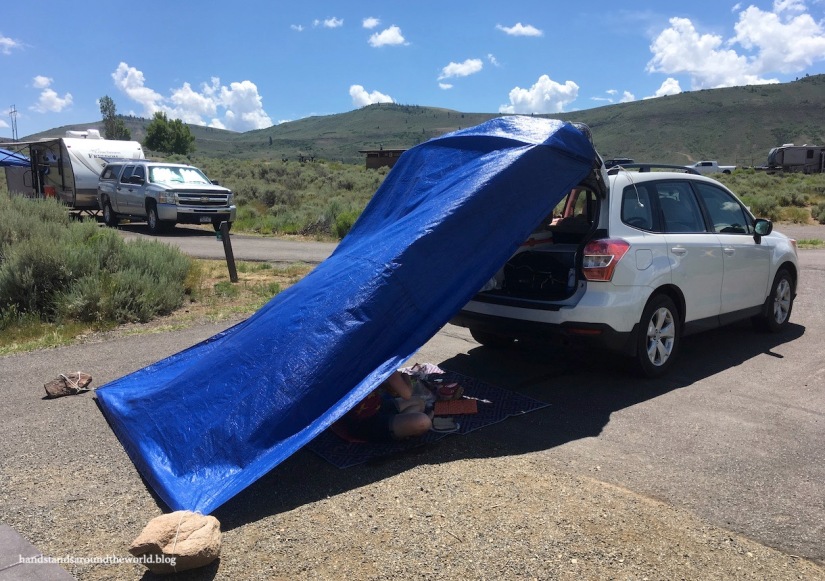 After lunch, we headed back out to squeeze in one final hike before heading home the next day. There are multiple options in Curecanti but we chose Dillon Pinnacles. This 4 mile (6.4 km) hike begins from the Middle Bridge pullout and curves around the shore of Blue Mesa Reservoir and back towards the geologically unique Dillon Pinnacles. 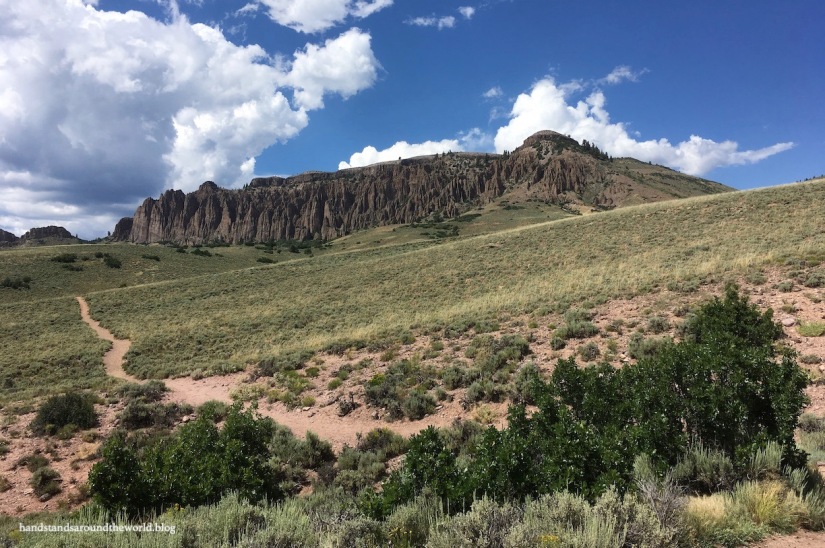 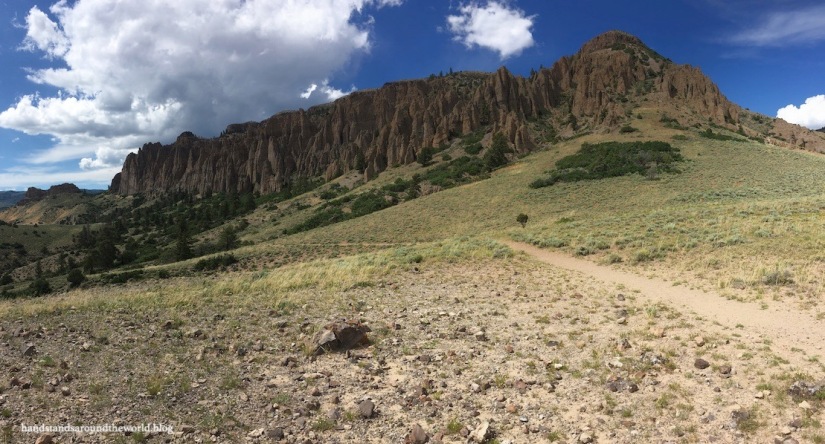 The rock surrounding Blue Mesa Reservoir is primarily sandstone, which accounts for the jagged formations we observed as we drove along the lakeshore. The pinnacles are made of brecchia, which is essentially a conglomeration of volcanic ash, mud, and other rock fragments from mountain ranges to the west. The brecchia was then capped with a harder layer of volcanic tuff originating from mountains to the south. It’s this combination of soft brecchia topped with erosion-resistant tuff that allowed the pinnacles to form. The up-close views were really neat, and the bench at the end of the trail is a nice place to take in the views of the reservoir as well. 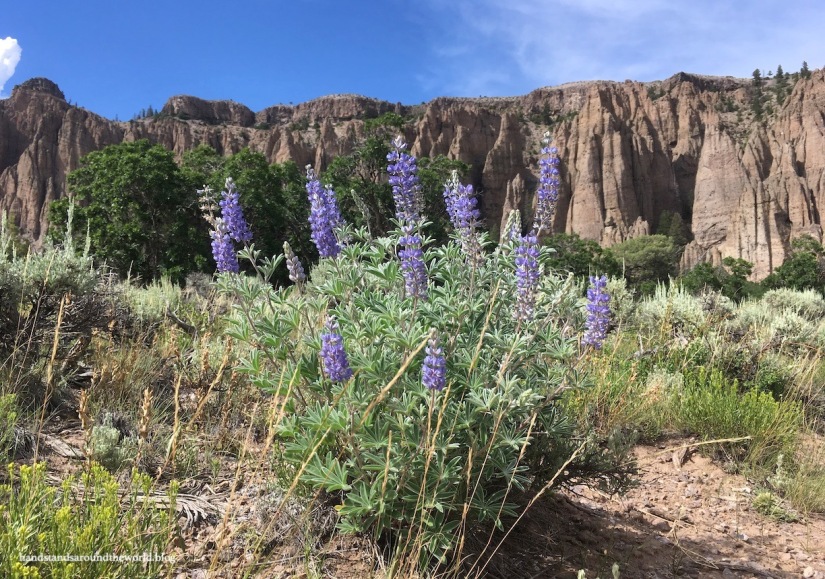 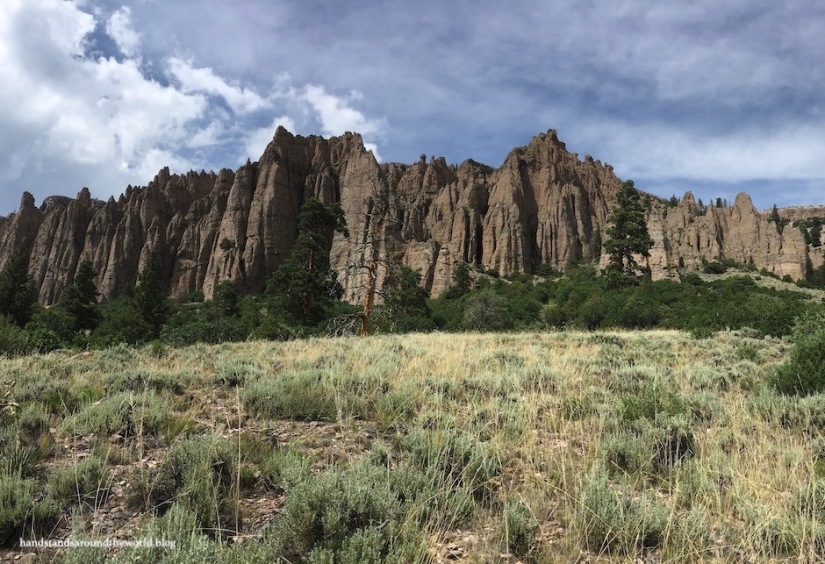 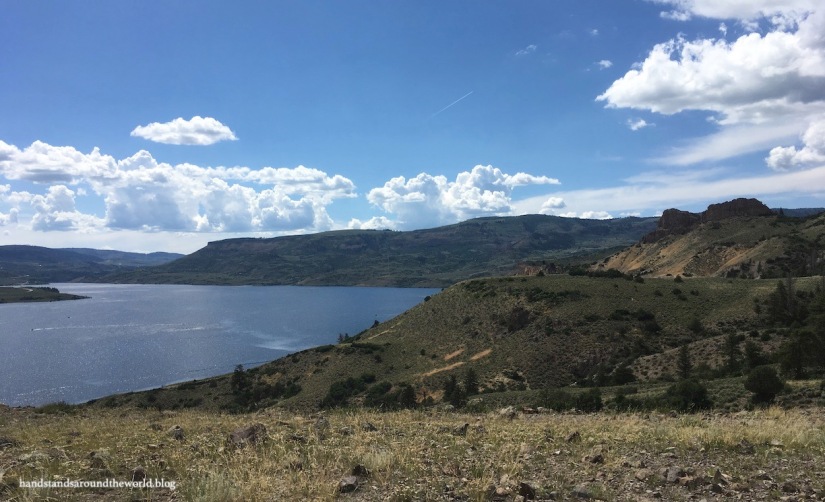 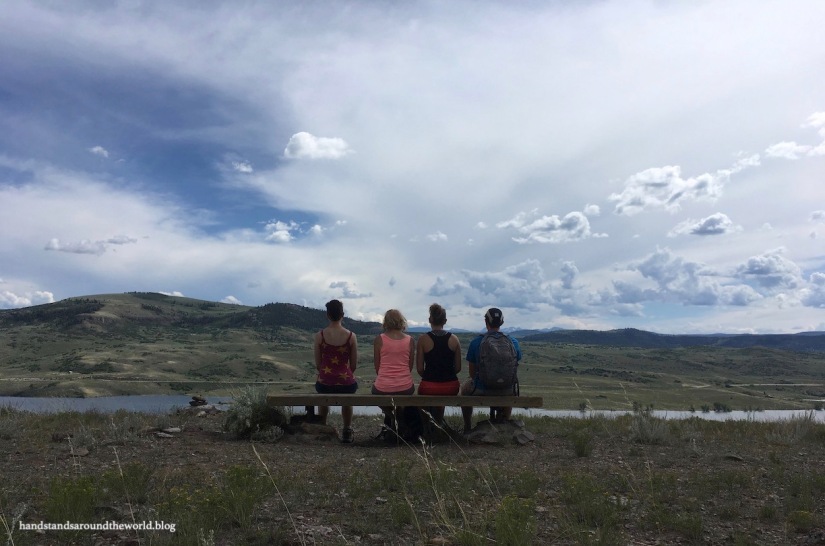 And that was it. That was the end of our summer vacation. As usual, we accomplished quite a lot in our 8 days on the road. This year’s trip in particular was full of variety; from the red sandstone of Arches to the towering 14ers and beautiful aspens of the Maroon Bells, from the painted chasm of Black Canyon to the blue water and neat geology of Curecanti. I’m so thankful for the existence of the Forest Service and the National Park Service and their efforts to preserve and protect these wonderful locations for us all! 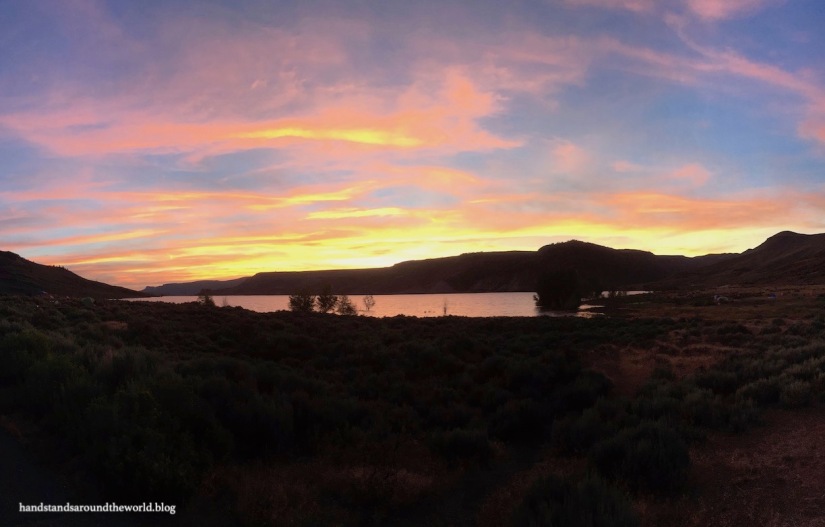