Day 5. The last day of our cross-country road trip.

After catching one last glimpse of Niagara Falls, my mom and I set off for the long drive across upstate New York. We drove I-90 from Niagara Falls all the way to Schenectady, before branching off onto Highway 7. This wasn’t the fastest way to Connecticut. But, as per usual, my mom and I decided that if we were going to be in New England, we were going to visit as many states as we could. We ended up hitting 5 of the 6, so I’d say we did a pretty good job.

We followed Vermont Highway 9 across the state, winding our way through the Green Mountain National Forest. After descending from the mountains, we stopped somewhere – I can’t recall where – for lunch.

Eventually, Highway 9 led us to New Hampshire, separated from Vermont by the Connecticut River. From here, we headed south. We weren’t in New Hampshire for very long. In fact, we’d been looking for an interesting place to stop and put our feet on the ground when we suddenly saw the “Entering Massachusetts” sign up ahead. And so we pulled over right there and killed two birds with one stone, putting our feet on the ground in both states.

From here, we met up with I-91 in Massachusetts and followed it south into Connecticut. By the time we arrived at my new house and unpacked the car, darkness had fallen and we became aware of just how rural New England can be.

This was an odd concept for me, seeing as how Montana is probably 98% rural while Connecticut is tiny but has nearly 3.5 times the population. New England is rural in a different way, though. There are houses scattered everywhere, but grocery stores and restaurants are few and far between. Thankfully, a very helpful man at a local gas station was able to point us to Willington Pizza House, which has since become one of my favorite local pizza places.

I always thought the fact that so-called “New England Pizza” was so much better than any other pizza was just people being snooty. In fact, it is not. Or I’ve become one of the snooty ones. Either way, New England does have some fabulous pizza.

By the next morning, my mom and I still had two things left on our road trip to-do list: (1) visit Rhode Island and (2) stand in the Atlantic Ocean for the first time ever. We weren’t particularly picky about how we accomplished these two things, so with a map in hand we set off across Connecticut and into southern Rhode Island and ended up in the quaint beach town of Narragansett.

And so, off the coast of Narragansett, my mom and I put our feet in the Atlantic Ocean for the first time. 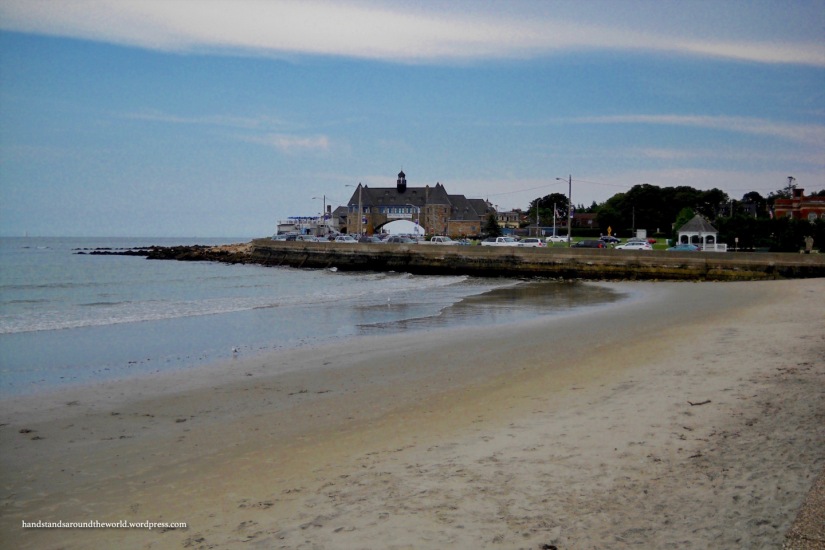 Sadly, this was our last stop. 2,366 miles (3808 km), 14 states, and 1 province later, our cross-county journey had come to an end. I was settled into my new house and oriented (somewhat) to my new university, and it was time to drop my mom off at the airport.

My first few days in Connecticut weren’t the greatest. In fact, adjusting to living in New England was a long and difficult process. I’ve been here for 5 years now and I’ve realized that I’m never going to be okay with the humidity or the constant terrible traffic. I’m always going to miss the mountains, the big skies, and the wide-open spaces of Montana.

But I’ve also slowly gotten used to my new home. And living in New England has paved the way for a new batch of adventures, ones I never thought I would experience – travels up and down the East Coast.

So where this post leaves off is where the next will begin – at the start of my adventures in New England.

5 thoughts on “Eastward Bound (part III) – Ontario to the Atlantic ”