After loading up on tea and filling our brains with tea-related facts, we hopped back on the road and continued our drive to Charleston. On the way, we made a brief stop at the Angel Oak – a giant southern live oak tree that’s 66 feet (20 m) tall, 28 feet (8.5 m) around, and estimated to be between 400-500 years old. It’s a truly massive (and wonky) tree; the longest branch is 187 feet (57 m) in length!

Contrary to what its name may suggest, a live oak isn’t simply an ordinary oak tree that’s alive. It’s an evergreen oak that can live for up to 1000 years and grow to enormous sizes. To me, “evergreen oak” seemed a bizarre classification given that they’re deciduous trees. It turns out they simply drop their leaves (which don’t change color first) immediately before new ones grow each spring.

Feeling small and insignificant from being in the shadow of this enormous tree, we then continued on to our final destination. Charleston is a very historic city, a fact evidenced by the elaborate architecture, giant old churches, and cobblestone streets. We ate a delicious lunch at a restaurant called Poogan’s Porch and then my aunt and uncle treated us to a buggy ride through the historic district.

A few minutes into our ride, a storm rolled in and thoroughly drenched the city – and my mom and uncle, who were sitting in the back corners of the buggy and weren’t fully covered by the roof. Because it was raining so hard, I don’t have a lot of good photos from the tour, but the few I managed from the buggy and while walking through the city on foot are below.

By the end of our tour, the storm had passed, but the effects of the downpour lingered. Turns out the highest point in the city of Charleston is 12 feet (4 meters) above sea level… at low tide. Since all the storm drains lead straight into the ocean, it doesn’t take very much precipitation for things to back up. Especially at high tide.

So we had no choice but to wade through the flooded streets. God only knows what was in that water.

We escaped the flooded streets into the slightly less flooded pavilions housing the slave market. Despite its name, slaves were never sold here. Rather, this is where slaves used to set up small booths to sell their handmade crafts, whatever those items may be. Today it’s more of a flea market, and there were many neat items for sale.

Once things dried up a bit, we ventured out to the Charleston Battery, with the ocean on one side and a row of mansions on the other. Back in the day, this was clearly where the extremely wealthy folks lived. 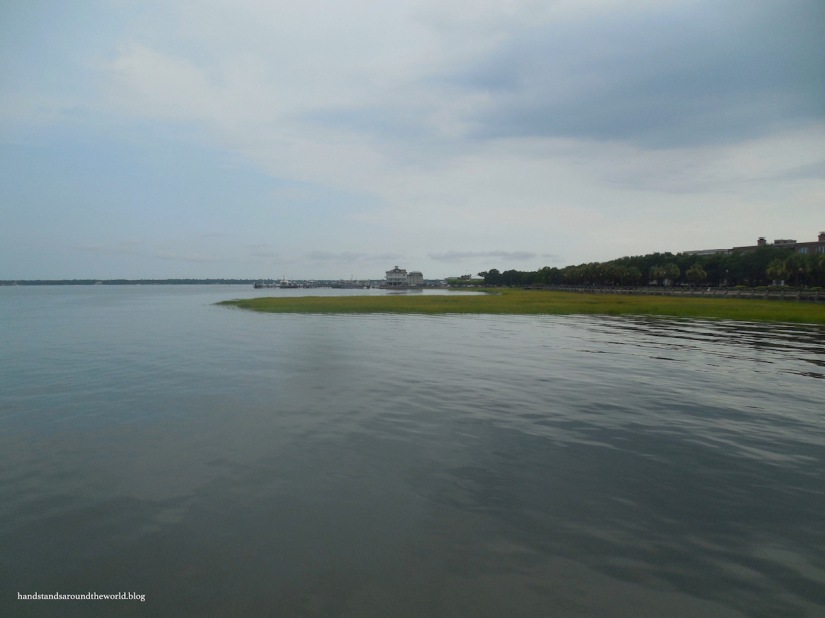 Unfortunately, this was all the time we had in Charleston. It’s definitely a place I want to return to; there’s so much history and we just barely scratched the surface.

On our way out of Beaufort County the next morning, we made one final stop in South Carolina: the ruins of the Old Sheldon Church. Originally called Prince William’s Parish, this church was built around 1750 and subsequently burned down twice; once by the British in 1779 during the Revolutionary War – after which it was rebuilt in 1826 – and again by the Union Army under General Sherman during the Civil War. After the second fire it wasn’t rebuilt, but parts of the building remain. The grounds also contain a few gravestones and live oak trees.

This marked the end of our time in South Carolina, but we still had a couple stops remaining on our trip: North Carolina and Washington, DC. Stay tuned for more on these destinations!