After an incredible hike the previous evening, we were excited to see what the rest of the Cape Breton Highlands had in store for us. And so we packed up camp and set off along the Cabot Trail. That night, we’d be camping on the opposite side of the island, so we had a bit of a drive.

Our first stop was up on top of the Highlands at a bog. I’d spent a few minutes at a bog in Indiana the previous summer but this one was very different. The one in Indiana was very marshy. This one – the French Mountain Bog – was much less marshy and was home to one particularly interesting species of plant: the pitcher plant. These plants catch and eat bugs, much like the Venus fly trap. We didn’t get to see any of them in action, but we did get to take a bunch of pictures of them as we walked the short (0.3 mile/0.5 km) boardwalk loop around the bog. 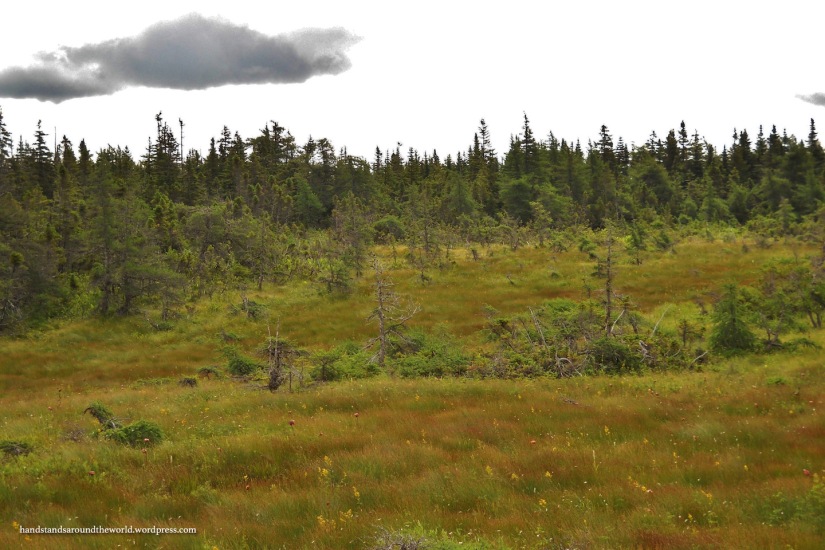 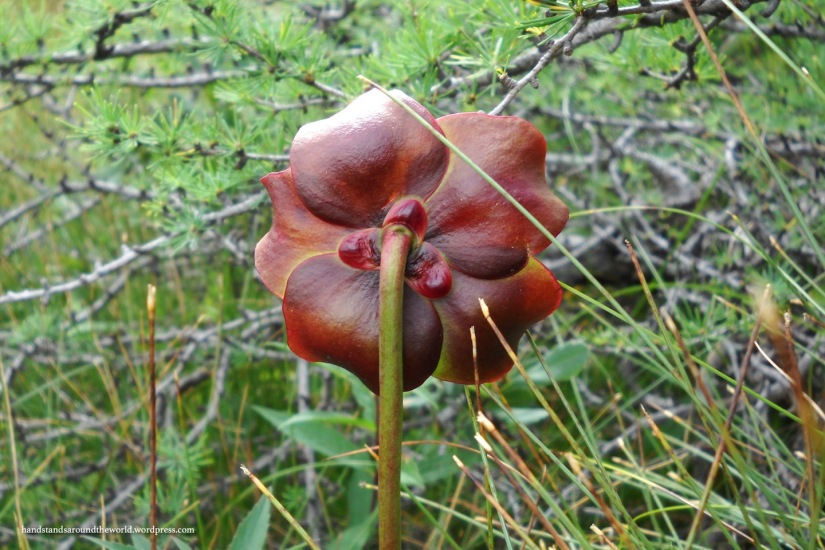 Beyond the bog, the road began to curve away from the coastline somewhat as we began our trek across the island. From viewpoints, though, we could still see the ocean way off in the distance. And in between the viewpoints, we actually dropped most of the way down to the level of the water. 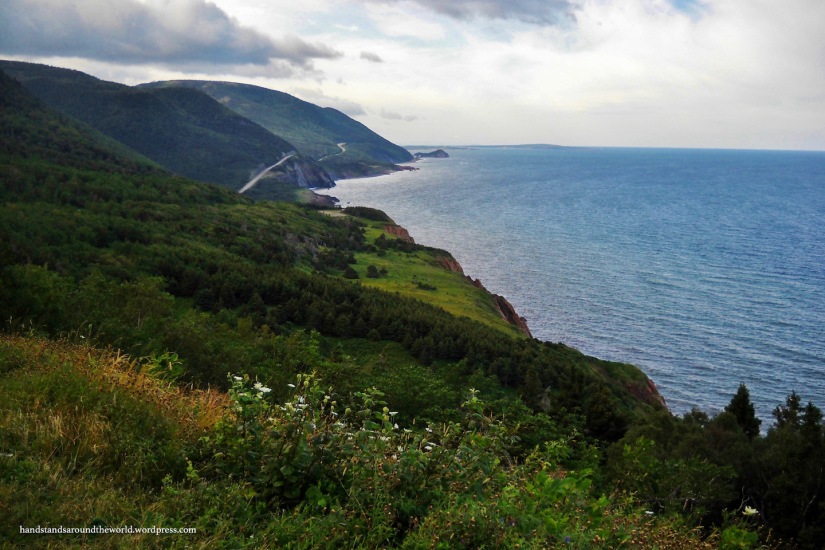 It was near here that we stopped for our next hike, a trail along MacIntosh Brook to MacIntosh Falls. This was a fairly short and easy hike (1.1 miles/1.8 km round trip), though it took us longer than planned thanks to the plethora of mushrooms that lined the trail. Don’t worry, we didn’t stop to eat them. We did take pictures of them, though, because there were so many unique species of fungus. We got a little carried away… I think I came home with about 60 mushroom photos. 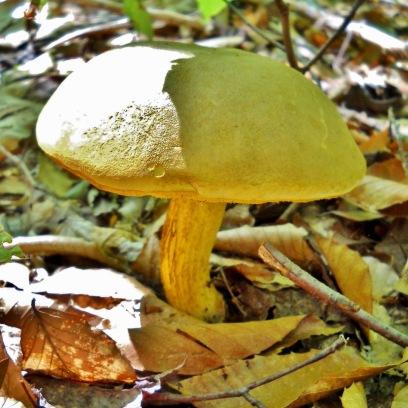 After tearing ourselves away from our new mushroom photographing obsession, we headed back to the car and continued along the Cabot Trail, finishing our trek across the island and reaching the Atlantic Ocean!

Our next few stops, then, were coastal. We spent a few minutes taking the sights at Neils Harbour and then hiked a combination of the Jack Pine trail and the Coastal trail, which took us to some fantastic viewpoints. 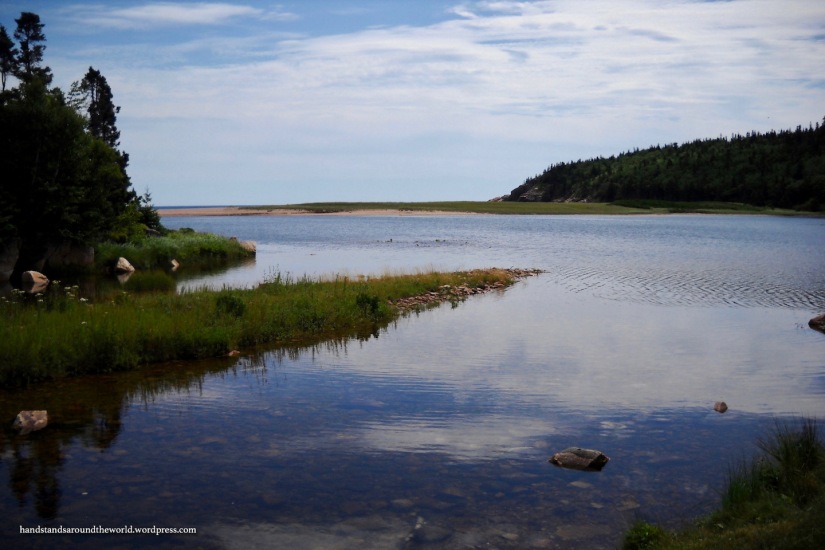 We spent quite a while at Black Brook Cove getting splashed by the crashing waves and walking up and down the beach.

Our final hike of the day was a steep climb up to Franey Point. We were pretty well wiped out by the time we reached the top, but the views of the Highlands, the Clyburn Brook Canyon, and the Atlantic Ocean made it worth the exhaustion.

We ended our night at Broad Cove Campground, which was a much better place to stay than Chéticamp had been; much more wooded and with some space between campsites.

The next morning before we left, we made two final stops – a quick drive to Broad Cove, and a short but steep climb up to Freshwater Lake Lookoff (115 feet/45 m up in just 0.1 miles/0.15 km – that’s one way to wake yourself up in the morning…) 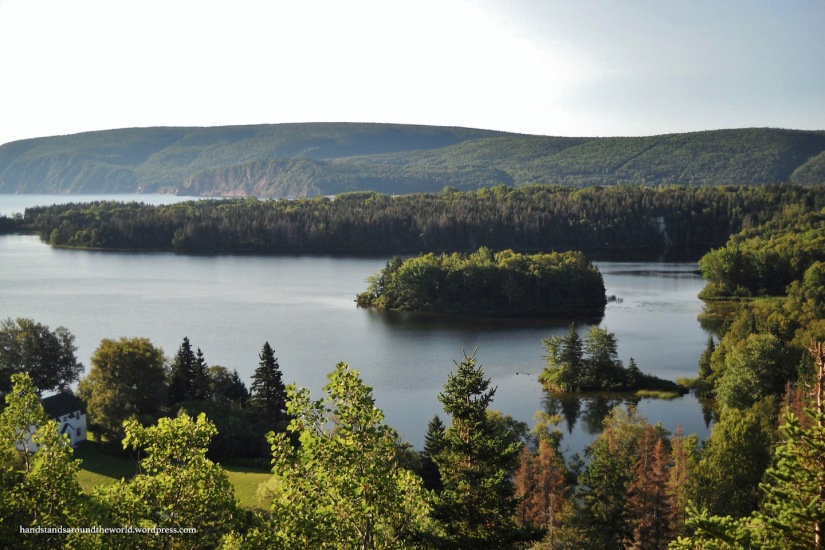 And that was it. It was time to head back to the mainland, across Nova Scotia, and into New Brunswick. But not before setting a new record for the most expensive tank of gas ever put into my car: $68! Seriously. $68 worth of gas. Into a sedan. 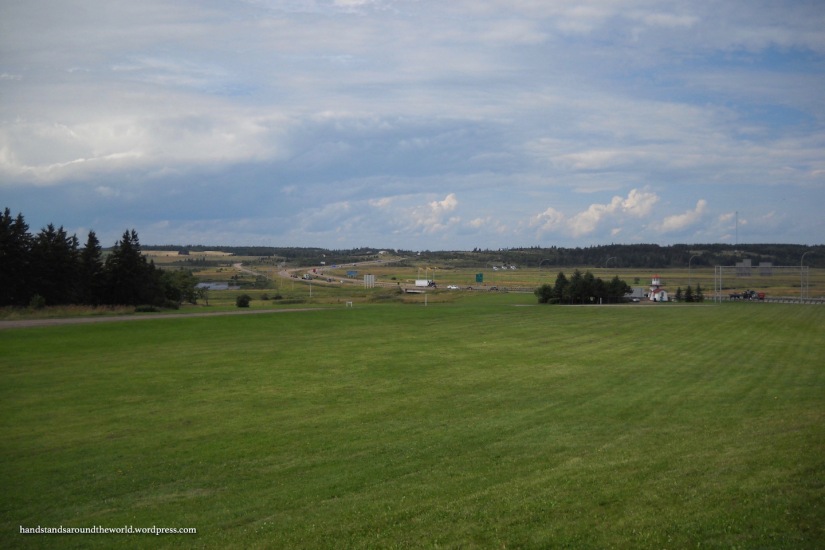 Moral of the story: Nova Scotia is stunning… and a very expensive place to fill up the tank