Most people don’t know this, but one of my majors in college was anthropology. Granted, it was anthropology with a biological focus. But I still took all the introductory classes, including archaeology. In fact, I initially signed up for an anthropology course because I wanted to be an archaeologist. Obviously I changed my mind – long story – but I still find archaeology to be incredibly cool.

So for me, Mesa Verde was a very interesting place to visit. Not only could I see all of the old dwellings, but I could read the interpretive signs and begin to understand how many of the things I’d learned in college are employed here by archaeologists as they aim to understand the lives of the people who used to live in Mesa Verde.

Some of it will obviously always be guesses and approximations. But over the years, archaeologists have been able to formulate some pretty plausible explanations for what life was like for these ancient peoples. And what better place to understand this than at Cliff Palace, the largest cliff dwelling in North America?

For example, tree ring dating of wood used in the dwellings shows that Cliff Palace was built and inhabited from 1190-1260 AD. The dwelling is very large, with 150 rooms and 23 kivas. (The alcove extends backwards 90 feet (27 m), so much of the dwelling isn’t even visible.) The number of rooms suggests that many people lived at Cliff Palace – archaeologists estimate approximately 100 individuals. The large number of kivas and the higher-than-average kiva-to-room ratio as compared to other sites suggests that many ceremonies were performed here. Perhaps Cliff Palace was a place of importance.

The rooms were small, each housing maybe 2-3 people. Single rooms located in the back or up high were more likely used for storage, as they were smaller and less accessible. Soot stains on the walls and ceilings of the rooms suggest that Ancestral Puebloans used fire. Doorways in the cliff dwelling are very short, suggesting that the average Ancestral Puebloan was much shorter than present day people. This is similar to the height of other human remains dating to the same time period elsewhere in the world; the average height was approximately 5 feet (1.5 m) for women and 5.5 feet (1.7 m) for men.

Lastly, the Ancestral Puebloans had to discard their trash, and usually did so by tossing it over the edge of their cliff dwellings. Therefore, down below are piles of garbage called middens. These middens contain broken tools and cooking utensils, food scraps, animal bones, and anything else that was unwanted. Everything found in middens can tell archaeologists a lot about how the Ancestral Puebloans lived. For instance, they were capable of fashioning tools of all shapes and sizes. They ate wild turkeys and used their feathers and bones for other purposes (e.g. clothing and tools). They made pottery. The list goes on.

Long story short, there is much to be learned at Cliff Palace.

Cliff Palace is located at the end of the Chapin Mesa Road and can be visited only by a ranger-led tour ($7 per person). The tour is 1 hour long and includes just ¼ mile (400 m) of hiking, but it’s rated as strenuous due to the altitude (7000 feet/2134m), and the 120 uneven stairs and 5 ladders that must be traversed to reach the dwelling site. 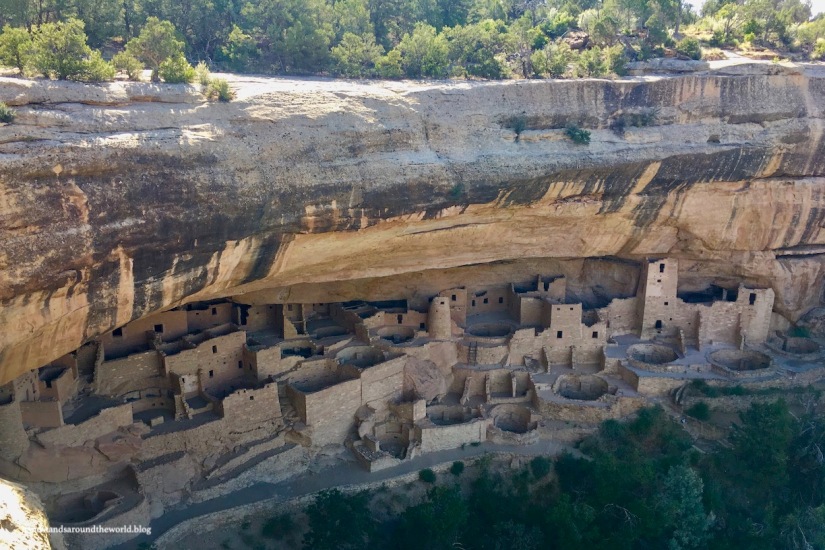 Climbing up to Cliff Palace

As you can see from the photos, Cliff Palace is a very intricate dwelling, with structures of many shapes and sizes. Some structures have been restored in recent years, but most remain as they have been for the last 800 years. It’s incredible to think that people lived here, in these stone structures built into the side of a cliff. It’s also amazing to think how far we’ve come in just 800 years! 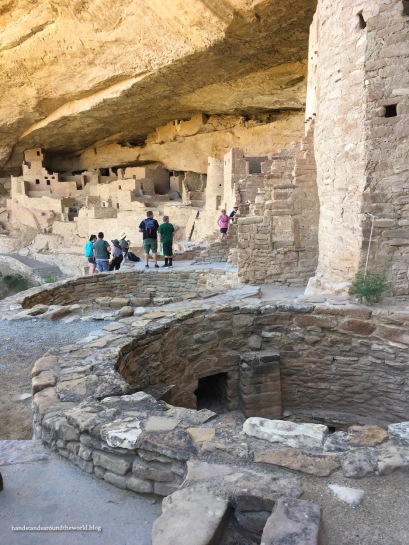 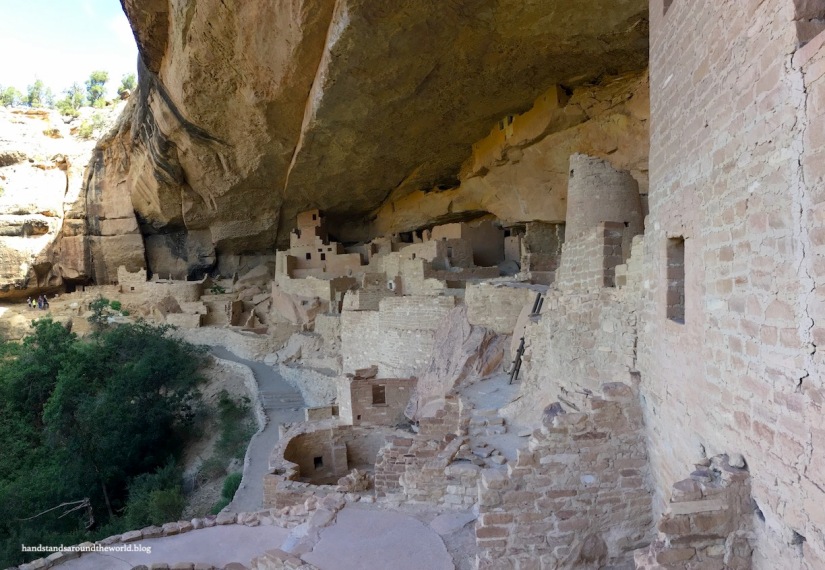 Continuing around the one-way Cliff Palace Loop Road, there are a few pullouts that provide views of some smaller cliff dwellings. 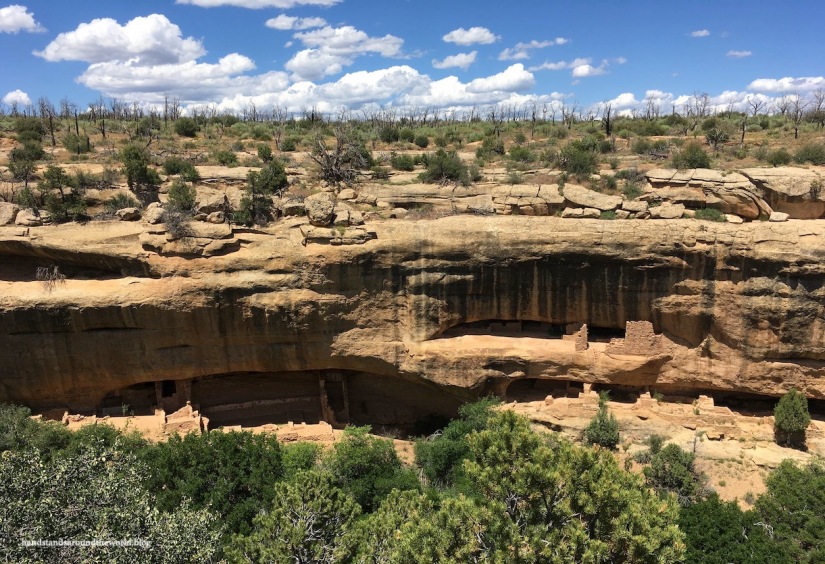 The next major stop on this loop was our final guided tour destination: Balcony House. The park website states that you may visit Cliff Palace or Balcony House, but not both, on the same day. However, when I told the ranger we wanted tickets for all 3 tours she booked us for back-to-back Cliff Palace and Balcony House tours, so I’m not sure how stringent they are about this rule. We certainly weren’t the only people to have secured back-to-back tickets.

Update: beginning in the 2020 season, tickets can now be reserved in advance on recreation.gov for $7/person. Some tickets are still sold in person at the visitor center, but supplies are limited.

(Aside from Cliff Palace, not a lot of creativity went into naming these cliff dwellings.) 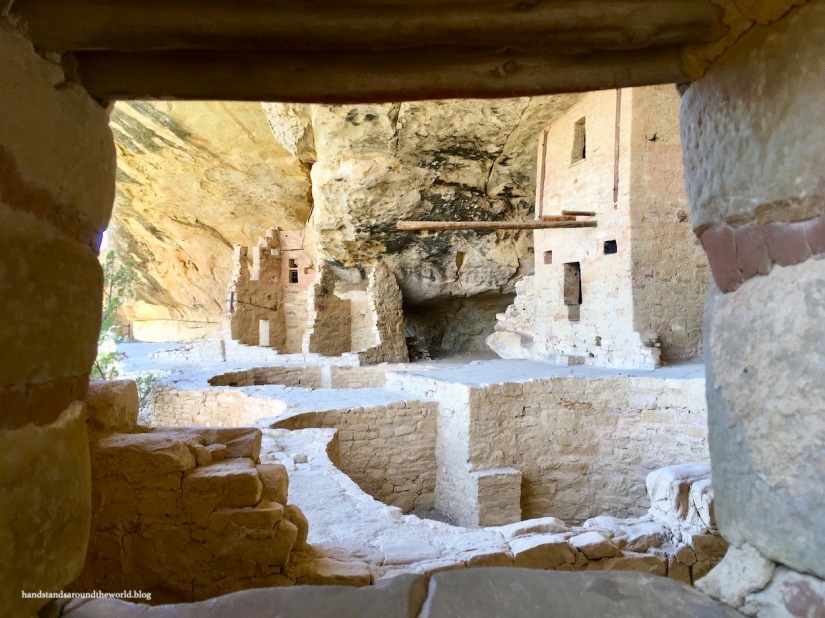 Like Long House, which I wrote about in last week’s post, Balcony House has its own seep spring. These springs form when water seeping through the porous sandstone of the cliffs meets a hard layer of shale. The shale prevents it from traveling any further and causes it to spill out of the rock. Like the other cliff dwellings, too, tree ring dating shows that construction and maintenance of Balcony House halted by the latter portion of the 13th century, when the Ancestral Puebloans left the area and migrated south. 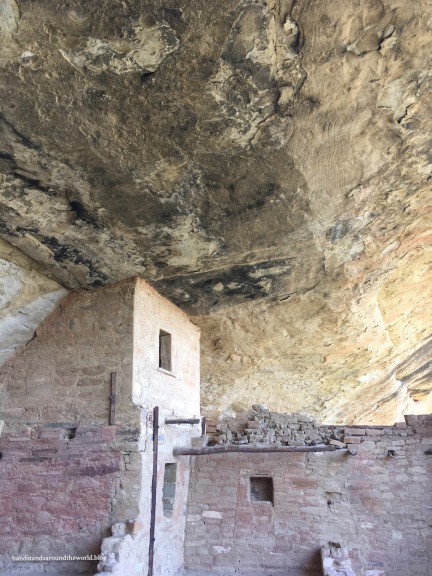 The black and red stains are remnants of fires

Also, getting to and from Balcony House requires navigating two very tall ladders, some steep sandstone stairs, and a narrow tunnel. If you’re slightly claustrophobic, don’t be deterred by the website description of the tunnel. It’s not as bad as it sounds. The entrance and exit are a tight squeeze, but the middle of the tunnel is large enough to stand up and spread out a bit. You can find videos on YouTube if you’re feeling unsure.

Ladder up to Balcony House 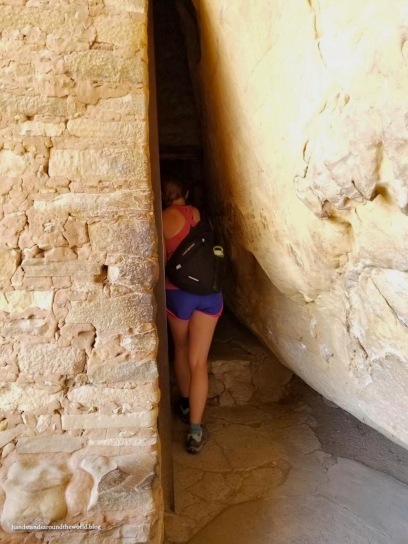 The remainder of our time at Mesa Verde was spent exploring the rest of Chapin Mesa, beginning with the Soda Canyon Trail. This is the only place where you can view Balcony House from above.

Back at Chapin Mesa Road now, we turned onto the Mesa Top Loop Road. These sites are exactly what they sound like – ancient dwellings located on top of the mesa rather than in a cliff alcove. As I explained last week, Ancestral Puebloans actually lived on top of the mesa for most of their occupation of this region. Archaeologists have excavated two main styles of dwelling unit at these mesa top sites: pithouses (dwellings built by digging down into the ground) and pueblos (dwellings built up from the ground using rock for the walls).

There are also a few cliff dwellings along this road, including Square Tower House which – as the name suggests – has a square tower that also happens to be the tallest structure in the park (86 feet/26 m).

Back at Chapin Mesa Road once again, we turned into the Spruce Tree Terrace area, home to Spruce Tree House (which is currently closed due to rockfall danger), the Chapin Mesa Archaeological Museum (which shows a very good informational video and is full of more artifacts and information than my brain could possibly have taken in by this point in the day), and the Petroglyph Point trail.

It’s disappointing that Spruce Tree House is currently closed, because when I visited with my family back in 2010 this was the one place we were able to climb inside a kiva. Hopefully it will reopen soon once they’ve stabilized the rocks.

The Petroglyph Point trail is a 3 mile (4.8 km) interpretive loop out to a wall of petroglyphs (pick up a trail guide at the museum before setting off). The trail is rocky with a lot of elevation change, and while it was neat to be up close and personal to the rugged sandstone geology of the cliff faces, we found it to be a lot of work for not a lot of petroglyphs. If you’ve never seen petroglyphs before, I would recommend this hike. If you’ve seen them elsewhere and/or are limited on time, it might not be worth the walk.

Our final two stops as we made our way back down Chapin Mesa Road were Cedar Tree Tower and Far View. Both areas are very well preserved and are excellent examples of Ancestral Puebloan architecture and ingenuity.

At Cedar Tree Tower, you can see remnants of dams. It may not look like much, but these remains suggest that Ancestral Puebloans had developed a primitive agricultural irrigation system. By planting behind these dams, they could ensure that the soil retained enough water to support their crops.

Far View is the largest mesa top site, and we were able to walk around and into a variety of large structures along the 0.75 mile (1.2 km) Far View Loop trail.

Well, we’ve reached the end of our Mesa Verde adventures. Hopefully you’re now fully equipped with history and archaeology factoids and I’ve convinced you to spend a couple days exploring this amazing park!

17 thoughts on “Life on the Edge of a Cliff – Mesa Verde National Park, Colorado (part II)”