Pat has been wanting to visit New Mexico since the day we arrived in Colorado. He didn’t really know anything about the state and, as a result, I think there was an aura of mystery surrounding it. I have to admit, I see his point; New Mexico rarely seems to be the topic of any type of conversation.

So in early June 2019 we headed off for our first camping trip of the year, about 30 minutes south of the Colorado border at Capulin Volcano National Monument. There’s no campground in the monument, but we found the nearby Capulin RV Park to be a suitable alternative. There was a decent amount of road noise and I could have done without the sign on the bathroom door asking me if I was going to heaven or hell. But the bathrooms themselves were quite possibly the cleanest I’ve ever seen at a campground, showers were free, and we had a view of the volcano from our site, so I can’t complain too much.

Truthfully, the worst part of the trip was the fact that we were excited to try out our new larger tent but we only made it about halfway through the night before being woken to the sound/feeling of the tent collapsing in on us thanks to the wind. After about an hour of these swirling gusts it was pretty clear we weren’t going to be able to get back to sleep and, after what happened in Kansas, we were also worried about tent damage. So we decided – at 2:00 am – to pack up the tent and sleep in the car. As we forced ourselves out of our sleeping bags and into the cold wind, we found our camping neighbors doing the exact same thing; after a brief conversation with them, we all decided that we weren’t being ridiculous and the wind really was that bad.

But anyway, I’m supposed to be talking about the volcano, not our midnight camping misadventures. Capulin Volcano is a cinder cone, which forms as a result of explosive eruptions that send ash, cinders, and rocks into the air. The explosiveness of eruptions is largely due to the silica content of the magma; high silica magma is very viscous, making it difficult for trapped gas bubbles to escape. A huge amount of pressure must build up to facilitate the escape, resulting in a very explosive eruption. If there is minimal wind, the debris then falls down onto the volcano, resulting in a symmetrical mountain. Capulin Volcano happens to be extremely symmetrical, which is a main reason for its preservation.

The National Monument itself is fairly small, encompassing the volcano and a small amount of land surrounding it. One day was sufficient for us to see everything. We began at the visitor center and then the picnic area, which has some nice little picnic nooks.

From there we ascended the volcano by car, an experience which is unique to this monument. The road makes a giant uphill spiral all the way around the volcano; it was a bit disorienting to drive this never-ending circle. Note that large vehicles, bicycles, and pedestrians are not allowed on this road. During peak travel season you may also experience a short wait, as the summit parking lot is small and traffic flow is monitored.

From the summit parking lot, a 1 mile (1.6 km) paved trail encircles the rim of the volcano, providing views in all directions. The Raton-Clayton Volcanic Field lies in the boundary zone between the shortgrass prairie to the east and the Rocky Mountains to the west; the Rim Trail is lined with interpretive signs that discuss the unusual mixture of plants that thrive in this boundary zone. 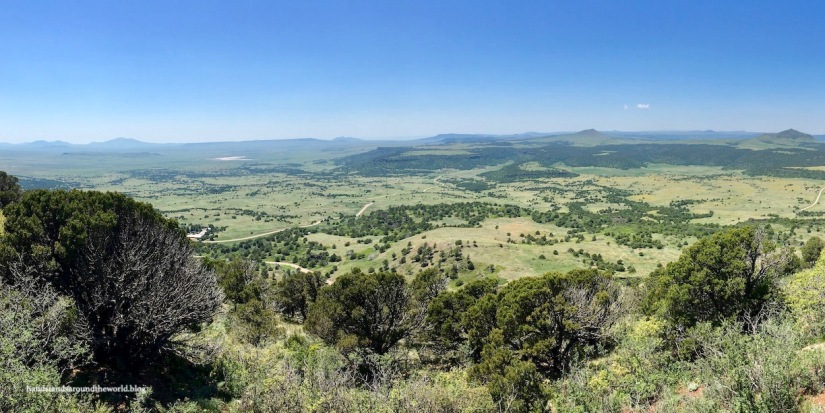 A second trail descends 0.2 miles (0.3 km) and 100 vertical feet (30 m) into the crater of the volcano. The crater supports many plants, including bushes of chokecherry – or capulín (Spanish pronunciation: cap-oo-LEEN) – for which the volcano is named.  My expectation for this area was something much more barren and desolate; I think I was basing this on my previous experiences at Craters of the Moon in Idaho. In reality, this entire area was extremely lush and green. 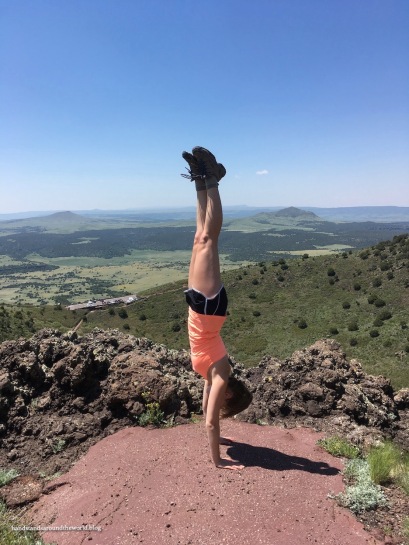 Afternoon thunderstorms are a risk at Capulin Volcano and lightning strikes will often temporarily close the summit road for visitor safety. It’s therefore best to complete your exploration of the top of the volcano early in the day.

After thoroughly exploring the summit, we headed back down to the base for some additional explorations. In addition to the explosive eruptions described above, the volcano also has a mouth – or boca – near the base of the western slope, from which molten lava occasionally flowed. This lava covered 16 square miles around the base of the mountain. The Lava Flow Trail, an easy 1 mile (1.6 km) loop, meanders through part of this flow which is now grown over and looks more like a meadow. This trail also provided some nice views of Capulin Volcano from a different perspective.

A second trail – the 2 mile (3.2 km) Boca Trail – leads to the mouth of the volcano. Our plan was to hike this trail on Sunday morning before heading back up to Denver but unfortunately we woke to the same crazy winds that had forced us out of our tent. It was cold and damp as well, and we couldn’t even see the mountain due to low hanging clouds, so we opted to skip this hike and just head home.

There’s also quite a bit of non-volcanic history of this area, which we learned about at the visitor center. The Santa Fe Trail – a pathway between western Missouri and Santa Fe – passes right through the Raton-Clayton Volcanic Field. This trail was used by white settlers and Mexicans for nearly 60 years in the 19th century, facilitating settling, trade, and even the Mexican-American War. Once the railroad was built, a new branch of the trail (the Granada-Fort Union Road) emerged, leading from Eastern Colorado to Santa Fe. Various locations along this trail are part of the Santa Fe National Historic Trail; a Santa Fe passport stamp is available at Capulin Volcano.

Additionally, the Goodnight-Loving Cattle Trail traversed through the Capulin region, running from southern Texas up through New Mexico and into Colorado and Wyoming. Some cattle also travelled along the Granada-Fort Union Road for a time. Eventually, completion of the railroad rendered all of these trails unnecessary and they fell into disuse.

Long story short, you can learn about much more than volcanoes at Capulin; if you’re ever in the area, this is a very unique place to spend a day!

Published by Diana @ Handstands Around the World

View all posts by Diana @ Handstands Around the World

16 thoughts on “In the crater of a volcano – Capulin Volcano National Monument, New Mexico”

Another year, another #americathebeautiful pass. Since last November, this one has taken us to Utah and Nebraska, New Mexico and Colorado, and a few other places in between. Today we used it one last time to #optoutside and enjoy these stunning views
Still not over this morning’s beautiful sunrise
Getting here was an adventure of route finding (and sometimes route missing 😂), steep climbs, scrambling, walking across awkwardly-tilted rock slabs, and then slipping our way back down the steep hills. But also, it was pretty neat. Thanks @fueled_by_candy for hiking with me! After 13 straight days of work, I desperately needed some time in nature with a good friend
I thought the aspens were past peak but @colorado_chelsea and I saw lots of colorful leaves today 🍁
📸: @co_hiker_bitch
No caption or filter needed