For Memorial Weekend 2016, Pat and I packed up the car and headed off to explore the Delaware Water Gap National Recreation Area. Contrary to what its name may suggest, it’s not located in Delaware. Rather, the park encompasses the Middle Delaware River, which forms the border between southeastern Pennsylvania and northwestern New Jersey.

From our place in Connecticut, it was a 3 hour drive straight west on I-84 to the northern tip of the park. The rec area is 44 miles (71 km) long but just a few miles wide, so it’s essentially divided vertically into north, middle, and south sections. We entered from the north on the Pennsylvania side; our campground was outside the southern portion of the park, but it was early enough in the afternoon that we had time to do a bit of exploring along the way.

Our first stop was Raymondskill Falls, the tallest waterfall in Pennsylvania – its three steps drop a total of 150 feet (45 m). It’s easily accessible via a 0.8-mile (1.2 km) round trip hike. The trail is muddy and rocky, so good shoes are a must. When the trail forks, one branch leads to the base of the falls and the other to the top. We took both forks, and really enjoyed this waterfall. 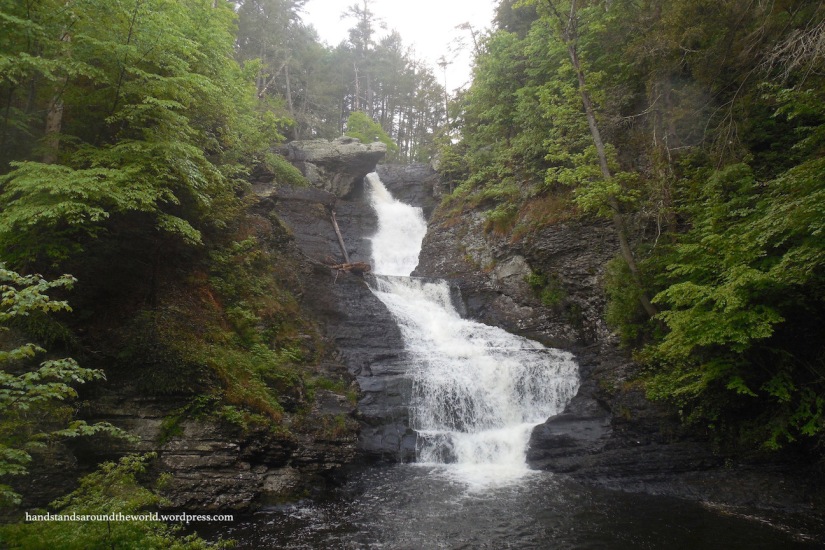 Our next stop was Dingman’s Visitor Center, from which the trail to Dingman’s Falls departs. Just a few hundred yards up the trail is Silverthread Falls. This is one of the most unique waterfalls I’ve ever seen. It’s 80 feet (24 m) tall and extremely skinny. I really, really liked it. The trail comes to an end at Dingman’s Falls, the second tallest waterfall in Pennsylvania. Again, one trail leads to the base and another climbs up a lot of stairs to the top of this beautiful falls. 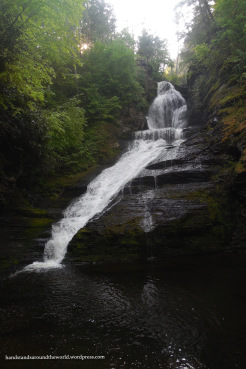 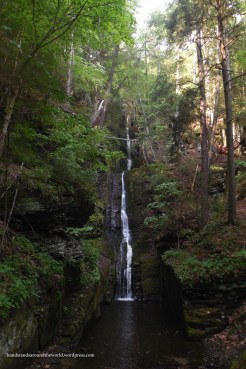 At this point, it was getting towards dinnertime and we had a bit of a drive still so we called it a day. This turned out to be a fortunate decision; little did we know just how much of a drive we still had. First, our GPS took us to the wrong campground. Apparently this is a very common problem, because the woman from the campground we showed up at handed us a printed set of directions to our actual campground.

So we followed these directions back the way we came, and were within 0.4 miles (0.8 km) of our campground when we came upon a road closure due to a washed out bridge. There were signs for a detour, which we had no choice but to follow. Unfortunately for us, the detour was about 30 minutes long down winding back roads.

Needless to say, by the time we finally arrived we were very hungry and very irritated.

Thankfully, the campground owner had directions for a much shorter detour back out to the main road. Why this wasn’t the main detour route is beyond me, but I’m thankful we didn’t have to drive 30 minutes out of our way every day.

Cranberry Run Campground isn’t the nicest place I’ve ever stayed but it’s also not the worst. I’d give it a 2.5/5. It was clean, the owners were very friendly, and our site was nice enough. But the facilities needed an update and quiet hours weren’t enforced, which was obnoxious.

To be honest, though, the extremely loud, high-pitched cricket sitting right outside our tent one night kept us awake more so than the people playing music or the jackass with the megaphone. (Seriously. A megaphone. Who brings a megaphone to a campground?)

Moral of the story: Cranberry Run Campground is an okay place to stay, but a GPS will not get you there.

Day 2 at Delaware Water Gap dawned clear and warm – we’d slept on top of our sleeping bags the previous night and I was already wearing shorts and a tank top at 8am. The predicted high for the day was 93°F (34°C), and it didn’t disappoint (though we wished it would have). It was a bright, sunny day with so much humidity that the sky was hazy, which unfortunately made for some pretty poor quality photography.

We spent the day in the southern portion of the park where “The Gap” is located. There are overlooks along the highway as well as trails to two high points – one on each side of the river. Our first stop was at Resort Point Overlook, which wasn’t actually much of an overlook. However, it’s the starting point for the trail up to Mount Minsi, which is the high point on the Pennsylvania side of The Gap.

The trailhead is marked by a sign for the Appalachian Trail, which is slightly misleading because it’s actually a spur trail that leads up to the AT. We didn’t realize this, and spent the first ten minutes of the hike wondering if we were on the right trail. Or on a trail at all.

However, we soon intersected with the AT and followed it the rest of the way to the overlook. This is where most people turn around. We continued up to the summit of Mount Minsi, but the view is actually better from the overlook. The round-trip hike to the summit was about 4 miles (6.4 km) and, for the most part, not overly steep. 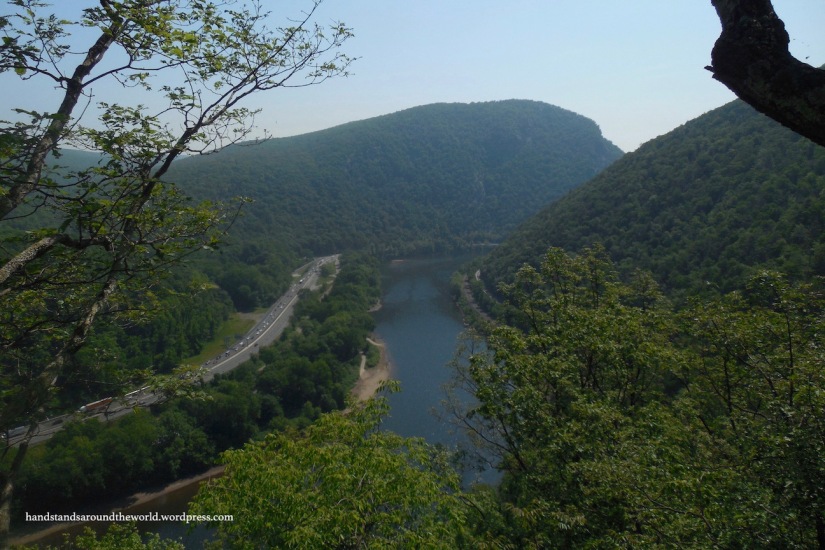 We stopped at the Kittatinny Visitor Center for lunch and ended up leaving our car there because parking at the Mount Tammany trailhead was full; from the Visitor Center, it’s just a 5 minute walk under the highway to the trailhead.

There are two trails to the Mount Tammany summit which can be combined into a 3.5ish-mile (~5.6 km) loop. The red-blazed trail is shorter but extremely steep (1250 ft elevation gain in 1.5 miles/380 m in 2.4 km) and one section involves climbing over some rather large boulders. The blue-blazed trail is longer, very rocky, and also pretty steep in places.

Opinions are mixed on which direction is optimal for hiking this loop. We elected to climb up the blue trail and down the red, and given how exhausted we were, I stand by our decision. I don’t think we’d have made it up the red trail. Of course, had it not been 95°F and 95% humidity beneath the blazing sun, we might have had an easier time. We actually had to stop for about 15 minutes because Pat was getting the beginnings of heat exhaustion.

But we made it, and the view was excellent! Definitely better from the New Jersey side. 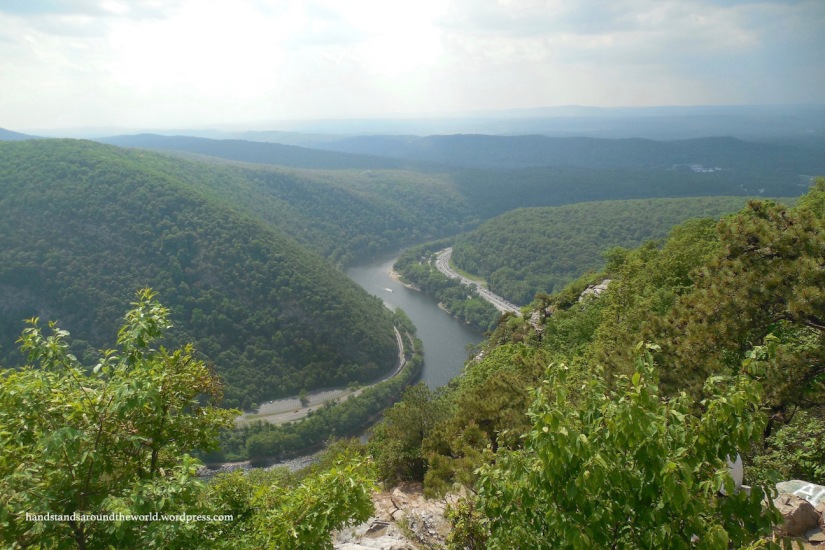 We sat and took in the view for a few minutes, but an approaching thunderstorm forced us to head back down earlier than we would have liked. Thankfully, we dodged any significant rain and were able to spend a few minutes contemplating the view of The Gap from an overlook along the red-blazed trail.

This hike, like most others in the park, was at times difficult to navigate. The trail maps provided at the visitor center aren’t very helpful. There are trails that exist but aren’t on the map, and the trails that are on the map aren’t always well-marked in reality. We had trouble finding the blue trail at first, and we certainly weren’t the only ones.

Regardless, this was a fun (and exhausting) day of hiking, and we enjoyed a well-deserved evening of relaxation back at our campsite.

9 thoughts on “The Gap (no, not the clothing store) – Delaware Water Gap National Rec Area (part I)”