I’m a big fan of Groupon. I know I’ve mentioned this before. They have great stuff, everything from discount trips to Europe to tours of local breweries. As it turns out, they also on occasion offer discounted stays at local campgrounds, which is how this trip was born. I didn’t know at the time that Jellystone Park is more of a resort than a campground, but they were offering a two-night stay for 75% off so we took it, and it turned out to be a decent place to stay.

Of course, I don’t go camping just to sit at the campground, but a little online research uncovered Minnewaska State Park Preserve in Kerhonkson, New York just 30 minutes away. After some of the state parks Pat and I have encountered in Connecticut, we weren’t sure what to expect here.

Minnewaska State Park is located atop a plateau in the Shawangunk Mountains (affectionately called the ‘Gunks by locals) of eastern upstate New York. As an out-of-stater, it was $10 per day to enter, but this provided access to everything within the park.

We entered from the northwest, off Highway 44, and parked at the Awosting Trailhead, eager to begin our day of hiking. We began with an easy 6 mile (10 km) round-trip hike to Lake Awosting on the Lower Awosting (black-blazed) trail. The trail was almost entirely flat and partly shady, and flowering mountain laurel bushes provided splashes of pink and white along the way.

Near the lake, the trail crossed a stream; from here, supposedly a short trail to Rainbow Falls splits off, but we were unable to find it.

Lake Awosting is the largest of the three lakes in Minnewaska State Park. It’s calm and beautiful, and we were the only ones there so we enjoyed a peaceful picnic lunch on the shore with our toes dangling in the water. 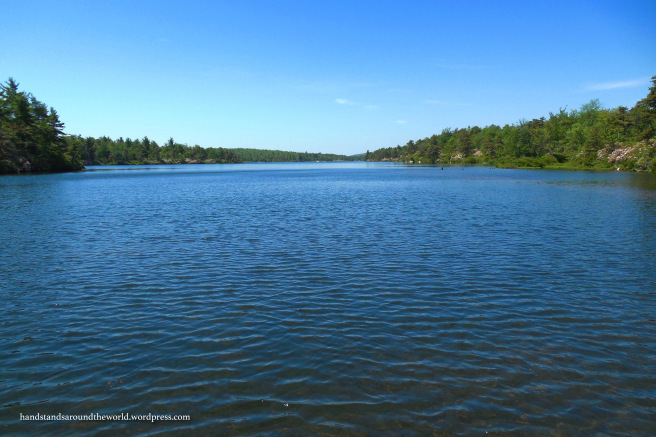 After retracing our steps (and again failing to find the Rainbow Falls trail), we headed back to the parking lot and up the road a short distance to the Awosting Falls (red-blazed) trailhead. I wasn’t sure what to expect here. When I’d googled the falls while planning the trip, photos showed little more than a trickle of water flowing over the edge, and there wasn’t a lot of perspective in terms of size. Nevertheless, it looked pretty with the horizontal layers and curvature of the rocks.

When we were halfway down to the base of the falls and began to hear some thundering water off in the distance, we realized we might have underestimated.

Awosting Falls is 65 feet (20 m) tall and – since it was relatively early in the year – roaring with water. We got sprayed from a decent distance away. It was much more powerful than we were expecting. And, truthfully, one of the coolest waterfalls I’ve ever seen! 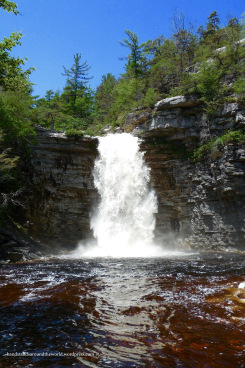 We then hiked back up to the road, and made the (poor) decision to walk up to the next trailhead rather than move our car. Well, okay, leaving the car was a decent plan since it was in the shade and parking was limited. Walking up a steep, narrow, curvy road in the hot sun wasn’t ideal.

But we eventually reached the orange-blazed Beacon Cap trail, which travels 0.7 miles (1.1 km) to the edge of the plateau and offers views of the Catskill Mountains to the northeast.

The orange-blazed trail ended here; we made the hike a loop by taking the less well-maintained yellow-blazed 0.9 mile (1.4 km) trail back.

We spent a few minutes contemplating Lake Minnewaska and then made our way back down the road in search of shade and a place to sit down. My feet were very much ready to be out of my hiking boots at this point in the day.

On our second day at Minnewaska State Park, we headed in to the southwestern – and highest elevation – part of the park, called Sam’s Point Preserve. The road in is narrow, curvy, and not well-maintained, and my car didn’t love the climb. Then again, my old car didn’t like most things.

Including – sometimes – functioning at all.

I didn’t know at the time that he was on his final breaths. But that’s a dramatic story for another time.

Anyway, we arrived at the visitor center/parking area where we looked through the exhibits before heading up the Loop Road Trail. This trail climbs very steeply up to Sam’s Point, at which the dropoffs are extreme and views are nearly panoramic. 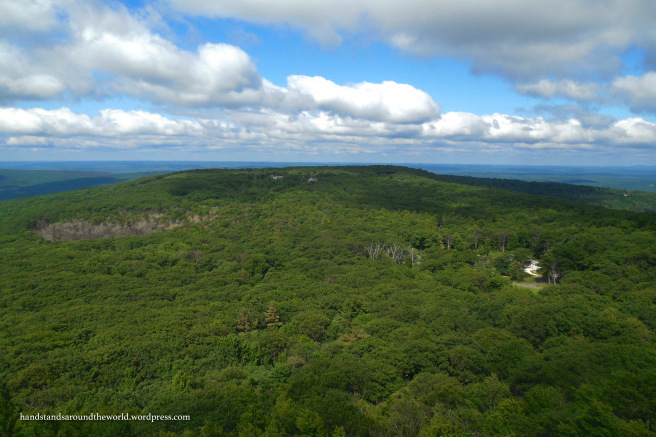 The trail then continues on, eventually forking to lead to Verkeerderkill Falls, the Ellenville Ice Caves, and Lake Maratanza. Our original plan was to take all of the trails, but Pat had caught a nice case of food poisoning the previous evening and wasn’t up to hiking so far so Verkeerderkill Falls took the cut. It’s unfortunate because it’s the tallest waterfall in the park, but stuff happens, so what can you do?

Anyway, contrary to their name the Ellenville Ice Caves are not made of ice; they’re made of good old rock. But the reason for their name quickly became apparent as we followed the trail down into a group of caves that are so cold inside that snow lingers year-round. The temperature difference between the caves and the outside was truly remarkable. 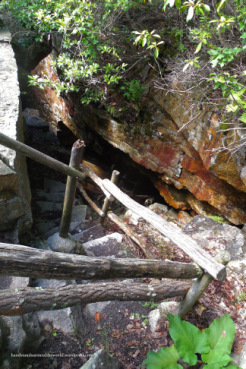 After looping through the caves, we ascended back to the Verkeerderkill Falls trail and headed towards Lake Maratanza. This lake is fairly shallow, surrounded mostly by small bushes, and home to the largest concentration of brilliant blue dragonflies I’ve ever seen. They didn’t bother us at all, though; they were just doing their thing and usually flew elsewhere when we approached. 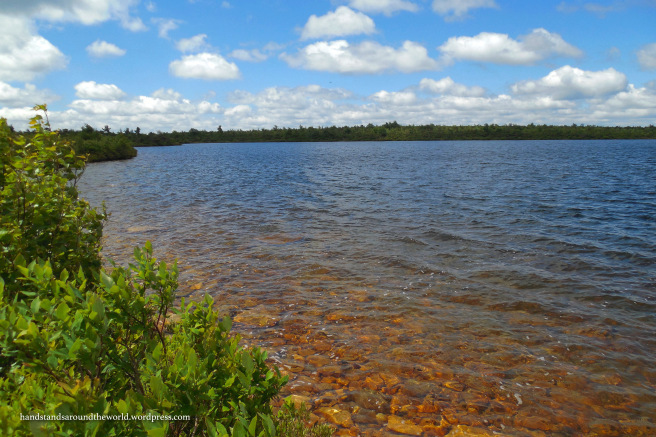 From Lake Maratanza, we followed the main trail back down to the parking lot, marking the end of our time in Minnewaska State Park.

Of all the state parks I’ve been to out east, this one is definitely one of my favorites. I’ve been recommending it to anyone who asks about our trip there. If you’re ever in the area, this is definitely a place worthy of your time!