Unfortunately, our time in Bruce Peninsula was basically the last time we saw the sun for the rest of our trip. We packed up under cloudy skies and spent the next ten hours driving through torrential rain to Gatineau Park, Quebec.

Gatineau (GA-ti-noh) is a National Capital Conservation Park, located across the river from the Canadian capital of Ottawa. Being in Quebec, most people speak French (though most speak English as well), so it was the first time I’ve ever really felt like I was in another country.

Gatineau Park is much longer than it is wide and extends north and west from the city of Gatineau to encompass the Gatineau Hills and the many lakes found in the area. Due to the truly awful weather, there are many things in the park that we were unable to see.

When we arrived at Philippe Lake campground, it was still downpouring, with no signs of letting up. So we put on our waterproof pants and jackets and awkwardly managed to rig up a tarp shelter under which we set up our tent. The picnic table was beyond soaked, so we headed out of the park in search of a restaurant, because there was no way we were cooking dinner in those conditions.

Suffice it to say the rain exceeded the waterproof limit of our waterproof clothing that evening.

Definitely not the best camping experience I’ve ever had.

By the next day, the torrents had downgraded to sprinkles interspersed with brief moments of sun, and our clothes were sort of dry, so we headed out to explore. Gatineau Park is divided into four sectors; we began at the Mackenzie King Estates, located in the southernmost Parkway Sector.

William Lyon Mackenzie King was the longest-serving prime minister of Canada who, upon his death, donated his land to be preserved. The estates consist of 1900s cottages and homes, Kingsmere Lake, a teahouse, gardens, and ruins of an old abbey. At the far end of the gardens was a short hike to Bridal Veil Falls, which was extremely lame and completely not worth our time (so unexciting, in fact, that I don’t even have a photo…). The rest of the estates, however, were beautiful, and it’s always interesting to learn some history of a new area.

After the estate, we headed up the Champlain Parkway onto the Eardley Escarpment. The Escarpment marks the boundary between the Canadian Shield and the St. Lawrence Lowlands and overlooks the Ottawa River Valley. There are numerous viewpoints along the road, with expansive 180° views. There are also three lakes along the parkway, each just a short walk from their respective parking lots. The most notable is Pink Lake, which has the distinction of being a meromictic lake. This means the currents of the lake – due to its size, shape, and protection on all sides by high cliffs – are such that the top and bottom layers of water never mix. Therefore, the bottom of the lake has been an anaerobic environment for thousands of years and is very unique. The only species that can thrive down there is a sulfur-metabolizing bacterium.

The lake itself doesn’t look any different from a normal lake (it’s not pink, sorry), but it certainly represents a unique phenomenon and is home to many species not found in a typical lake.

We also stopped at Mulvihill and Bourgeois Lakes, and then took a quick detour to Meech Lake, which is located in the central Meech Sector of the park. This was the only portion of the Meech Sector we were able to explore, so I can’t offer any more insight into this area.

Day two in the park dawned cloudy and with the promise of rain later in the afternoon, but we were determined to squeeze in a hike before the sky unleashed its fury on us once again.

This was a hike we were particularly excited for because our destination was a cave made entirely of marble!

Lusk Creek has been carving away at the marble through which it flows for thousands of years, and thanks to reduced erosion of surrounding rock, we have Lusk Cave. It’s not fancy and shiny like the statue or kitchen countertops that probably came to mind when I said ‘marble,’ but it does have the same smoothness to it.

Exploring Lusk Cave is a unique adventure because it requires you to wade up Lusk Creek, which still flows through the cave today. It was cool and drizzly, which wasn’t the ideal weather for immersing our legs in cold water, but we’re a hardy bunch. So we rolled up our pantlegs, put on our souvenir sandals from Niagara Falls, and stepped right in. We also brought dry socks, flashlights, and lots of warm clothes – just in case.

The trail to Lusk Cave leaves from Parent Beach near the Philippe Lake campground. It’s a 10 km (6 mile) round trip hike to the cave itself and then only about 150 meters through the cave. However, near the exit the water is deep enough and the ceiling low enough that swimming is required to go any further. It’s just a small section and we probably could have managed it without dunking our heads. On a warm day, it would have been a welcome relief.

But we had neither sun nor warmth, and hypothermia wasn’t excessively high on our priority list, so we simply turned around at this point and headed back the way we’d come in. 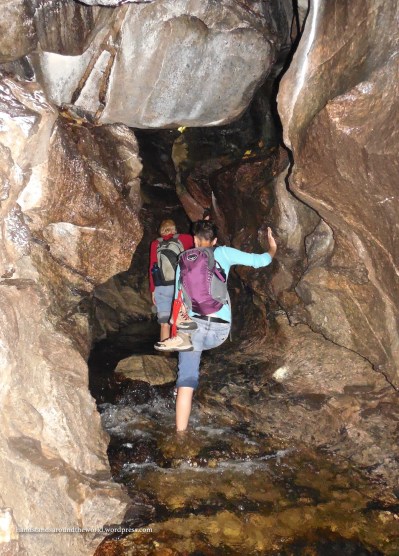 This unfortunately marked the end of our time at Gatineau Park. It’s a large park and there are entire sections of it we didn’t see – mostly thanks to the weather. It’s definitely a place I’d like to explore further someday, along with the rest of Quebec.

If anyone has some Quebec travel suggestions for me, I’d love to hear them. Also, feel free to share your stories of caving adventures in the comments below!

14 thoughts on “A Meromictic Lake and a Marble Cave – Gatineau Park, Quebec”