In June of 2014, Pat and I passed an important milestone for any adventurous couple – surviving our first camping trip together! It was a fairly last-minute decision, and we didn’t even have our own camping gear at this point. But we wanted to get out and explore, so we managed to borrow what we needed from his family and we even found a last-minute campsite at Lake Waramaug State Park in western Connecticut. This turned out to be a pretty central location, giving us a chance to explore the many state parks in the area.

And so begins part 3 of my Connecticut state parks series (to read parts 1 and 2, click here and here)

1. Kent Falls State Park – Kent, CT
Kent Falls is the tallest waterfall in Connecticut, dropping about 250 feet over a series of 7 cascades. The falls are located on Falls Brook, and a trail leads along the brook to all of the cascades. As with most waterfalls in this area, it’s best viewed in spring or after recent rains. 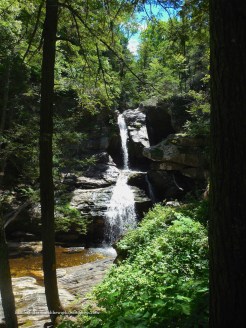 2. Macedonia Brook State Park – Kent, CT
Macedonia, Connecticut was an old farming and industrial settlement known for various mills and its iron working facilities. In present day, most of the farms and industries are gone and instead, the forests have been preserved as part of the state park.

This park is located right on the western border of the state, and from the top of Cobble Mountain we could look out over the forests of eastern New York. There are multiple trails at Macedonia Brook, as well as what appeared to be a very quaint, quiet campground that I’d like to return to someday.

3. Lake Waramaug State Park – Kent, CT
This is a very tiny state park, encompassing little more than the campground and the lake. But that was okay, because we were really just looking for a place to sleep. For those looking for a place to hang out there’s a small beach (that’s covered in goose poop, swim at your own discretion) and the lake is open for non-motorized boats.

Camping is $17/night for CT residents and $27/night for non-residents. Somehow, despite the fact that there were only 2 sites left when we made our reservations, we got the best one in the whole campground: site #3. It was spacious and had a natural barrier of bushes that provided some privacy, which is more than can be said for most of the other sites that are right out in the open and practically on top of each other.

Mount Tom rises to an elevation of 1,325 feet (404 m). It requires hiking a 1 mile (1.6km) loop to get to the summit; a tower on top will get you up above the tree tops, providing views in reward for the effort of climbing to the top.

Fun fact: this is also one of the oldest state parks in Connecticut.

5. Camp Columbia State Park – Morris, CT
This is, without a doubt, the creepiest place I’ve ever been. Pat and I actually thought we might die here. As in, get murdered by someone who was hiding in the silence, lurking in the shadows with an axe just waiting for his next victims.

I’m only being a little bit dramatic. It was spooky, almost completely deserted, and the woods – as well as the remnants of Camp Columbia – were eerily silent. Not to mention the red streaks of paint on the inside of the tower that very well could have been the blood of previous victims.

We weren’t sure we’d ever be seen alive again. Nevertheless, we decided to risk it and entered the creepy tower through the metal gate to begin our climb to the top. It was dark inside, and not a single other person was in sight. The stairs wound up and around, spiraling inside the tower and eventually coming through an opening and winding around the outside of the tower near the top.

Fifty feet off the ground, and we came across a gap. An entire concrete step was missing.

Somehow, this made it even creepier.

But we made it to the top, and obviously we didn’t get brutally murdered and wind up the unknowing subjects of a future horror documentary.

Nevertheless, I will never be going back to this place. Or recommending it to anyone.

6. Housatonic Meadows State Park – Sharon, CT
This last one I actually visited on a separate camping trip with Pat and his family a couple years later. However, it’s in the same area of the state as the other 5, so I’m going to go ahead and talk about it here.

Housatonic Meadows State Park is located on the shores of the gently-flowing Housatonic River. About half of the campsites are set just back from the riverbank, and we fell asleep listening to the babbling of the water and the gentle breeze. We camped here in August, and the water level was low enough that we could walk all the way across the river.

When we weren’t navigating the flowing waters, we sat on the sandy banks reading and playing games. We went for a short hike up Pine Knob Loop Trail to a high point with some views, and walked a small section of the Appalachian Trail. And at night the lack of light pollution made for some amazing star gazing. We even saw a meteor!

Well, that’s it for part 3 of this ongoing series. Stay tuned for part 4 next week!