Well, I guess the title of this post kind of gives everything away. But yes, I did once drive over an hour to Providence, Rhode Island just to go to dinner.

Well, my aunt and uncle were passing through Connecticut and booked a hotel in the area so they could spend a couple days with me. It was the middle of the week, so I had to be on campus for part of the day – but that was okay because they were able to spend time exploring Boston, and we could then meet at the halfway point in Providence and have a giant, delicious dinner at a restaurant that I’d visited once before: Fire + Ice.

If you’ve never been to Fire + Ice, you should remedy that. I think of it as buffet meets Mongolian-style cooking. In other words, they have an enormous range of food options, and you load up your plate with the raw foods and take them to the center where they cook it up for you on a giant hot plate.

The food choices are many: salad, soups, fruit, many varieties of noodles, all types of veggies, meat, and sauces. You can basically make anything you want. On weekends, they have a brunch buffet that also includes pancakes and omelets made with whatever additions you choose. They also have an ice cream bar. It’s delicious and I always leave feeling like I won’t need to each for the rest of the day. Sometimes I actually don’t.

After stuffing ourselves full of food, we decided to walk some of it off by walking around downtown Providence a bit to see the city. I’ve been to Providence a couple other times as well, so the photos below are from a combination of these three trips. 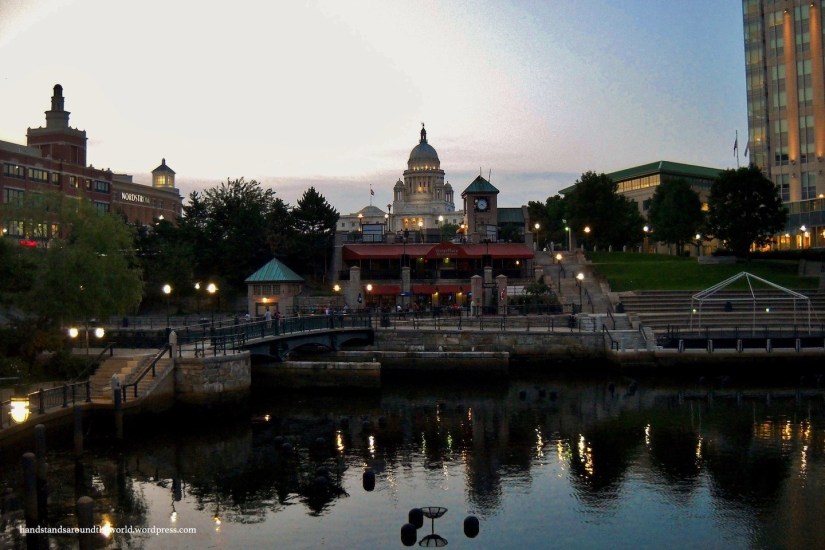 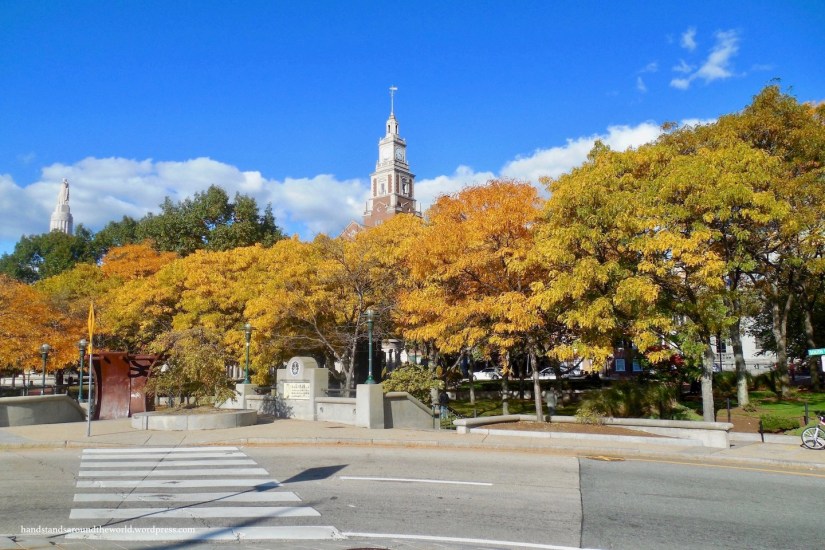 I like Providence. Like all cities, it has its areas that aren’t so nice. But it also has a lot of nice areas, and the Providence River runs through the center of the city, making for some nice scenery. I’ve always enjoyed it. You can park at the Providence Place Mall for 5 hours for just $2 and on-street parking is free after 6pm, so it’s also a fairly cheap place to visit.

Plus, I will always remember Providence as the place where Pat and I got to see Brian Regan perform live!

(If you aren’t familiar with Brian Regan, you should remedy that also – click here or here for two of his best skits)

Moral of the story: I enjoy visiting Providence, Fire + Ice has a delicious brunch, and Brian Regan is hilarious!

Parts of my body that hurt today: shins, calves, thighs, hamstrings, ass Reason: climbing this beast yesterday Every time I think about how sore I am, I go look at my list of hikes I want to do this summer to remind myself of all the amazing adventures I’m training for 🏃🏼‍♀️🥾⛰ #boulder #beboulder #bouldercolorado #hikeboulder #bouldermountains #boulderosmp #osmp @boulderosmp #bearpeak #wwhmember #womenwhohikecolorado #optoutside
It’s official: I’ve now experienced the sufferfest that is Bear Peak 😩🥵⛰ #boulder #beboulder #hikeboulder #bouldercolorado #bearpeak #flatirons #sufferfest #womenwhohike #wwhmember #womenwhohikecolorado #5280life #coloradolife #outtherecolorado #explorecolorado #coloradotography
Colorado sky is on fire tonight 🌇 #sunset #sunsetcolors #sunsetphoto #sunsetcaptures #coloradosunset #colorfulcolorado #coloradoskies #coloradogorgeous #goodnightcolorado
First hike of 2020! #colorado #coloradorockymountainhigh #coloradotography #5280life #coloradogorgeous #coloradolife #outtherecolorado #wildandco #coloradocreative #coloradoshared #coloradogram #explorecolorado #snowshoecolorado #snowshoeing #msrsnowshoes #womenwhohikecolorado #wwhmember #optoutside #hikersofinstagram
@52hikechallenge I did it. I completed the challenge! I ended 2019 with 63 hikes and almost 305 miles. It was a fun challenge and I’m really glad I participated. It definitely motivated me to get out there and get my weekly dose of nature. It’s also a relatively inexpensive hobby, and that was perfect since we’ve been focusing on becoming more financially stable after so many years of one or both of us being in grad school, plus student loans, plus moving across the country. Hiking was the perfect way for us to explore Colorado while staying within our budget. That being said, I’ve decided not to participate in 2020. I’ll still do plenty of hikes. But there are so many other outdoor things to do in this beautiful state and I feel like I’ve completely neglected those in pursuit of my hiking goals. So this year, the plan is to branch out and have some other types of adventures! In the meantime, I’ve put together a complete list of my 2019 hikes as a year end summary. There are photos and stats for each one and you can read the complete list on my blog... link in bio! #enjoylifeoutside #neverstopexploring #thehikemovement #womenwhoexplore #womenwhohikecolorado #wwhmember #optoutside #getoutside #coloradolife #52hikechallenge #52hikechallenge2019 #hikerlife #hikinglove #hikeon
A summary of my 2019 hiking accomplishments will be the theme tomorrow, but for today I want to give a shout out to the final two @pubpass destinations we checked off last year. We had some truly delicious beers at @someplace_else_brew a couple weekends back (and brought some cans home with us!) and then mixed things up a few days ago at @coloradocidercompany (the only cidery in the Pub Passes). All in all, we made it to 22/25 breweries in the passport. We haven’t purchased any kind of beer passport for 2020 so we’ll just be winging it this year. And if anyone wants to share your fav Denver area breweries, that would be lovely! Cheers to 2020 and all the beers that await us 🍻 #2019 #beersof2019 #beer🍺 #denverbeer #coloradocraftbeer #coloradocraftbrewing #beersofcolorado #drinklocal #localbeer #breweryhopping #pubpass #2020
Follow Handstands Around the World on WordPress.com