In June 2013, my roommate (who had just graduated and moved to Massachusetts) called me up to invite me on a camping trip with her fiancé and 3 of their friends. The destination: Mount Monadnock, New Hampshire.

So I packed up what little gear I had and headed up to her house on Friday night. From there, we all crammed into 2 cars and headed up to Monadnock State Park. We arrived fairly early in the day, too early to check into our campsite, in fact. But that wasn’t a problem because we were planning to summit the mountain first.

Interesting fact: Mount Monadnock is actually one of the most summited mountains in the world… probably due to its fairly central location within New England and the fact that it’s not excessively tall (elevation 3165 feet/965 m, prominence 2150 feet/655 m) and therefore relatively simple to climb.

Don’t get me wrong – it was still a steep hike. But there isn’t any mountaineering involved, and there are a variety of trails for people of different fitness levels.

We took the white blazed trail, and I remember that this was the day I realized how much I hate New England trails. I swear, no one out here has heard of the switchback. Whoever blazes the trail just finds the shortest way up the mountain, no matter how steep it is or how many giant boulders are in the way. Maybe for a 6-foot tall guy, those are regular sized steps, but for us shorter women they’re huge. It’s exhausting.

Above about 2000 feet (61 m) the forest fades away and we found ourselves hiking across the large expanse of rock that makes up the summit of the mountain. The plus side of this is that views were excellent… once the fog lifted. The down side is that there was no shade to be found.

The summit was somewhat crowded – this is a popular mountain – but we were able to find our own space to relax, eat lunch, and take in the panoramic views before beginning our descent. 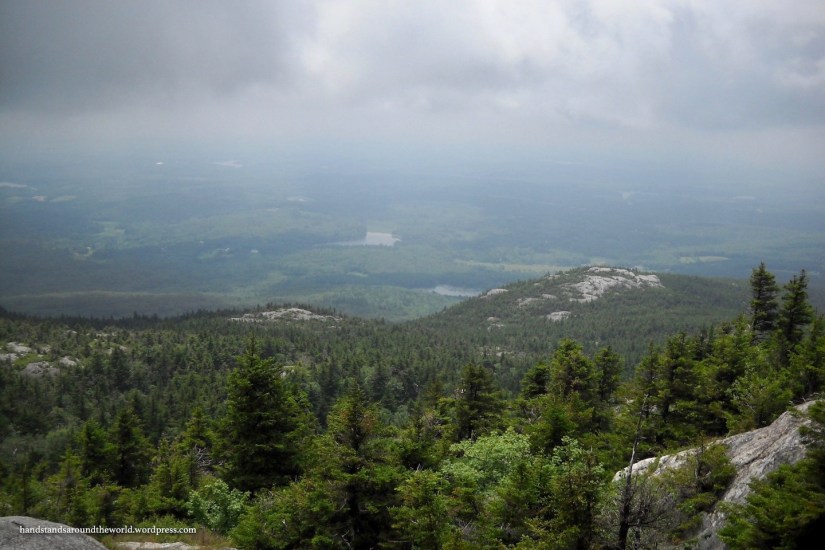 There are some hikes in which going down is even more difficult than going up. This was definitely one of them. We were hot and tired but still had to pay close attention as we climbed over giant rock after giant rock.

By the time we arrived back at our cars, we were exhausted and covered in what my mom likes to call “the gross trifecta” – sunscreen, sweat, and bug spray. So we checked into our campsite, pitched our tents, and then made ourselves a giant dinner of hot dogs, baked beans, s’mores, and some well-earned beer.

We slept well that night, and the next morning we walked over to Gilson Pond, where we were treated to a reflection of the mountain in the still morning water. 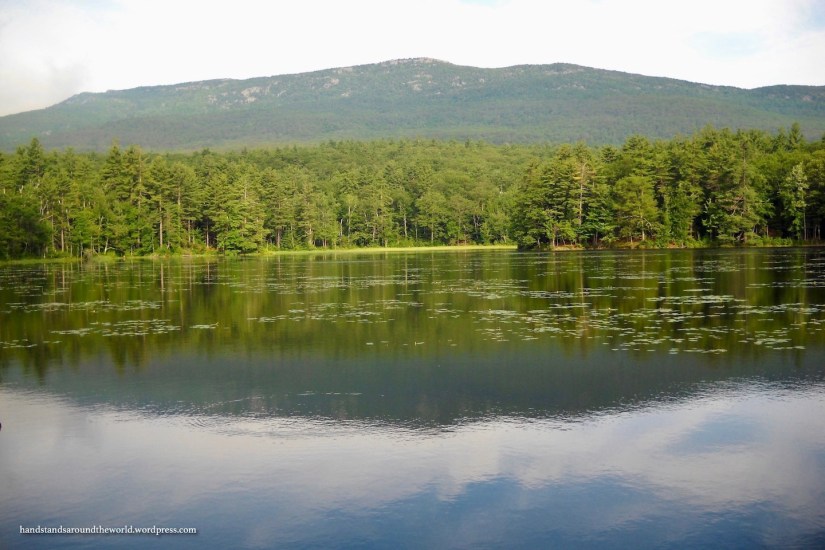 My only complaint about my time at Monadnock is that this was a pretty expensive weekend. It cost us $70 for the campsite plus $30 in park entrance fees and we were there for 24 hours. I realize that fees are necessary and demand is high – but still. That was pretty steep.

But aside from that I really enjoyed summiting my first actual east coast mountain!