When I was a kid, our vacations rarely included cities. Aside from stopping to gas up and restock our cooler, we usually just stayed out in nature. And while nature is always going to be my preferred destination, in recent years I’ve been able to spend some time visiting some US cities. And I’ve realized that I really enjoy it.

I’m still not a city person, and I don’t want to live in one for any extended period of time. But I do enjoy exploring them.

I live just a couple hours away so I’ve been able to visit the city 3 or 4 times in the last few years.

In 2013, my aunt was in Boston for a conference so I headed up for the day to see the city for the first time and spend some time with her. I met up with her outside the Convention Center and we walked up to Quincy Market for Brunch. I don’t remember the restaurant we went to, but I do remember that their French toast was delicious!

Afterwards, she had to go back to the conference for a few hours but we had plans to meet up again for dinner. This left me with about 6 hours to explore the city.

I admit, I’m not good at being alone. Despite all the things I’ve read about why you should live alone at least once in your life or the advantages of solo travel, I’m just not an alone person. It’s ironic, because I’m definitely not an extravert. I just prefer to have people around me.

But I was by myself for a few hours and I wanted to see the sights, so off I went. And I ended up having a really great time exploring the city by myself.

Our brunch place was right next to Faneuil (FAN-yoo-ul) Hall, an old market building and meeting center that was built in the mid-1700s. Today it’s part of the Boston National Historic Park and is home to a visitor center, so I began my tour of the city here.

Next, I ended up wandering over to the Charles River and then backtracking to Boston Common, a public garden that is also the beginning of the Freedom Trail. 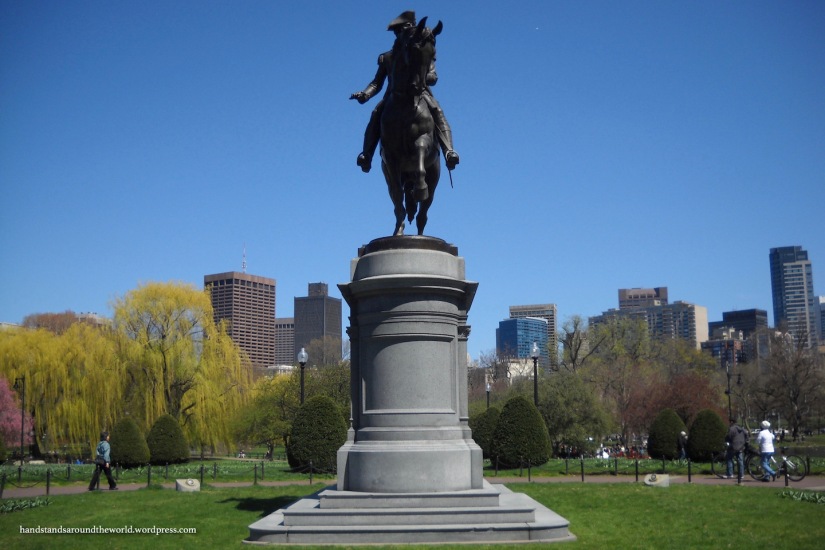 My visit to Boston came less than a week after the Boston Marathon bombing. It was nice to see how people had come together in the face of such a horrible tragedy. These signs were two of many decorating the Public Garden and Boston Common

The Freedom Trail is a 2.5 mile (4 km) path that connects many historic attractions in downtown Boston. It’s marked on the sidewalk with a narrow line of red brick, so it’s very easy to follow. And so I set off along the trail of red bricks, stopping periodically to take in the historical sights as well as the spring flowers that were painting splashes of color across the city.

A few months ago, I walked the Freedom Trail again when Pat and I took my mom and sister to visit Boston, so these next photos are from a combination of the 2 trips. 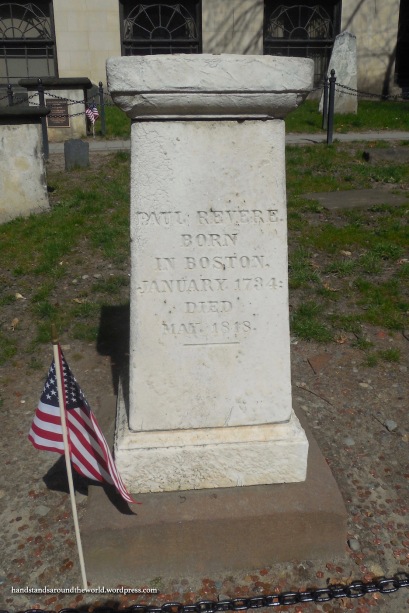 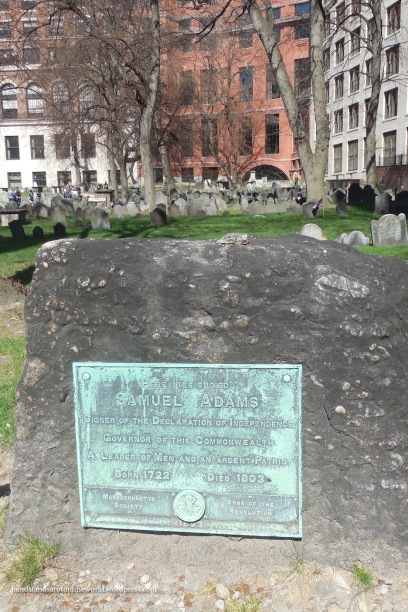 After crossing the river into Charlestown, a walk through a park and a historic neighborhood brought me out to the Charlestown Navy Yard, home to the USS Constitution. This wooden frigate is the oldest still-floating naval vessel and is nicknamed Old Ironsides due to her remarkable resilience during the war of 1812. Today she is managed by the National Park Service and is open for free tours. 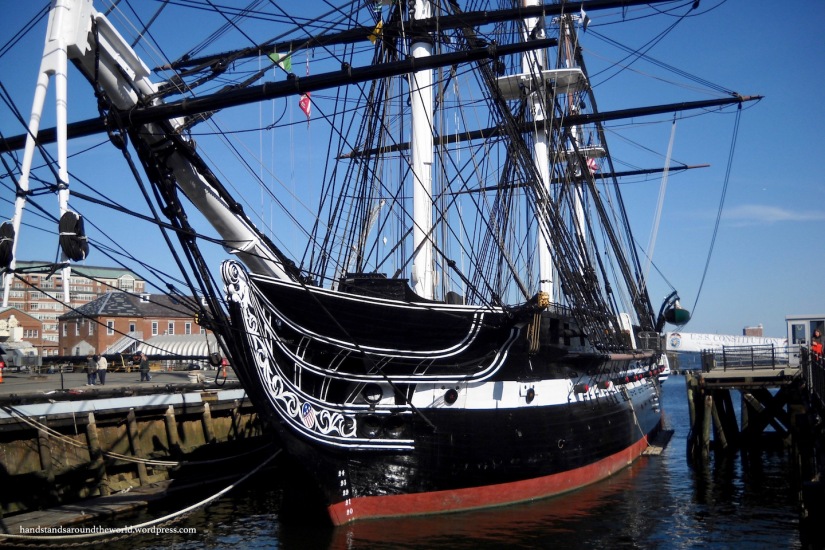 When I was here with my family, the USS Cassin Young – a Navy Destroyer – was also open for free tours. She served in the Pacific during WWII as well as the Korean War before being retired from service in 1960. The Cassin Young is one of only 4 remaining Fletcher class destroyers.

Not only was the USS Cassin Young open for tours, but a park ranger advised us that they may be offering guided tours below deck. In fact they were; about 10 minutes after boarding the ship, we and just a few other people headed downstairs for a tour of areas of the ship that most people never get to see!

Our last stop was at Bunker Hill Monument, the northern terminus of the Freedom Trail. The Battle of Bunker Hill took place fairly early on in the Revolutionary War; in fact, it was the first battle between the British and New England soldiers. Though the colonists lost the battle, the British suffered many more casualties and it forced them to re-evaluate their strategies.

Today, a 221 foot (67 m) tall obelisk atop Bunker Hill commemorates this battle, along with a statue of Major General Joseph Warren, who died in the battle. 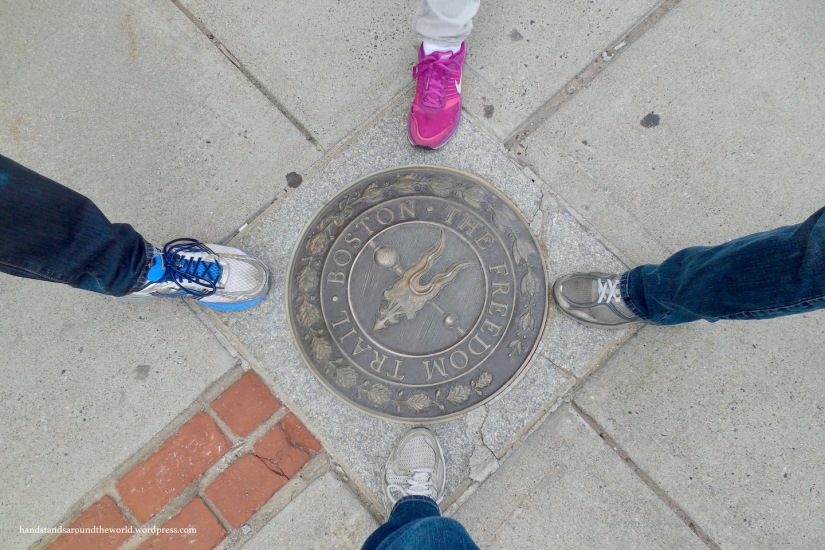 For those who feel like killing their legs and lungs, 294 spiral, concrete stairs lead to the top of the monument. Tickets are free but you must to have one to enter, and you’re only allowed in at the time listed on your ticket. The stairs are narrow and the area at the top of the tower is small, so they limit the number of people in the tower at one time. Fortunately we only stood in line for about 15 minutes to get the tickets and then another 15-20 minutes before we could go up.

The stairs are numbered in increments of 25, which was a mixed blessing. As we neared the top, it was encouraging to see we were almost there. But when I was already huffing and puffing at step #100, seeing that large white number staring back at me made me feel pathetically out of shape.

(I’m not. Stairs and I have just never gotten along.) 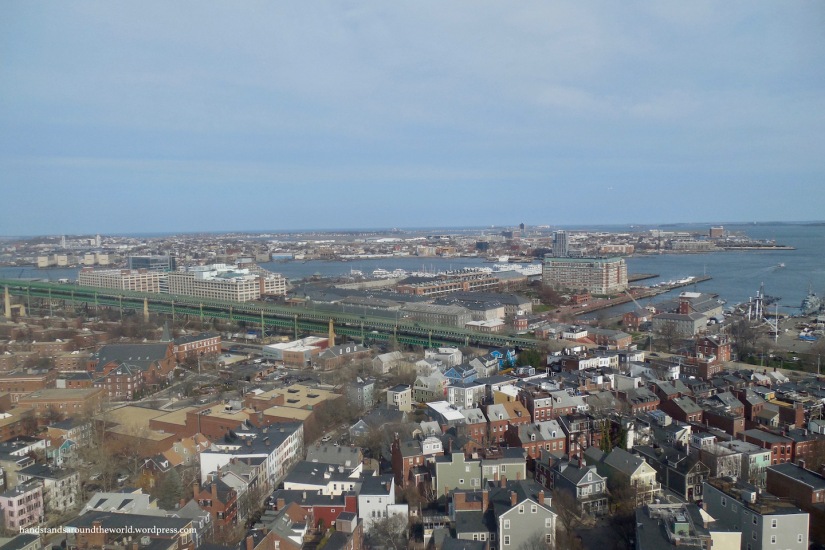 By the end of my solo Boston day, I’d walked about 12.5 miles (20 km)! My aunt and I finished the day with dinner at a Mexican Restaurant down by the waterfront, and I sipped on a well-earned margarita along with our dinner. All in all, a very nice end to my whirlwind day in Boston.

With my family, we ate at one of the many pizza places in Little Italy; one of the few that didn’t have a line going out the door. The food was delicious, but we learned the hard way that we should have looked them up on Yelp first. They overcharged us for our meal, which we didn’t realize right away – apparently this is a common complaint with them. Had we known, we probably wouldn’t have eaten there.

Anyway, before I wrap things up I’m going to tack on a few photos from my 2015 Boston trip. I was there for the annual Experimental Biology conference, but the weather was miserable. It was cold and windy and snowy and rainy for the 5 days my classmates and I were there, which left us with very little desire to explore the city. 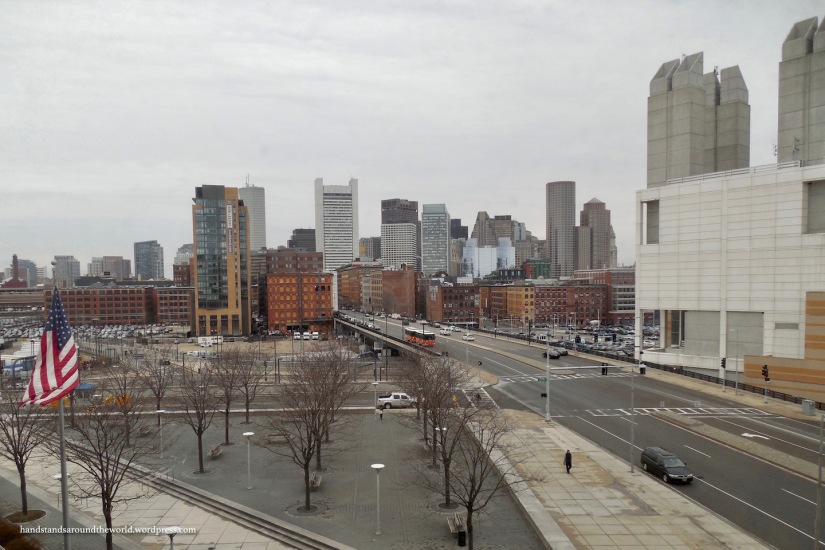 Boston is a very lovely city, and I’ve really enjoyed the time I’ve spent there. Definitely a place I wouldn’t mind spending some more time exploring.

6 thoughts on “Sightseeing and History in Boston, Massachusetts”