Day 2 at Crater Lake dawned clear and calm, which was perfect because this was the day we’d been waiting for – boat tour day! We’d hemmed and hawed over this for quite a while because the $42 per person tickets didn’t really fit in with our MO of budget travel. But in the end, we made the tour reservations because we knew that if we didn’t we’d end up regretting it.

And it was worth every dollar!

The only access to Crater Lake is on foot, by descending an incredibly steep 1.1 mile (1.8 km) trail to Cleetwood Cove. This strenuous trail drops 700 feet (215 m) in this short distance; going down isn’t too difficult, but climbing back up at the end of the day is a different story. After a long day in the sun, our legs were not pleased with what we were asking of them. 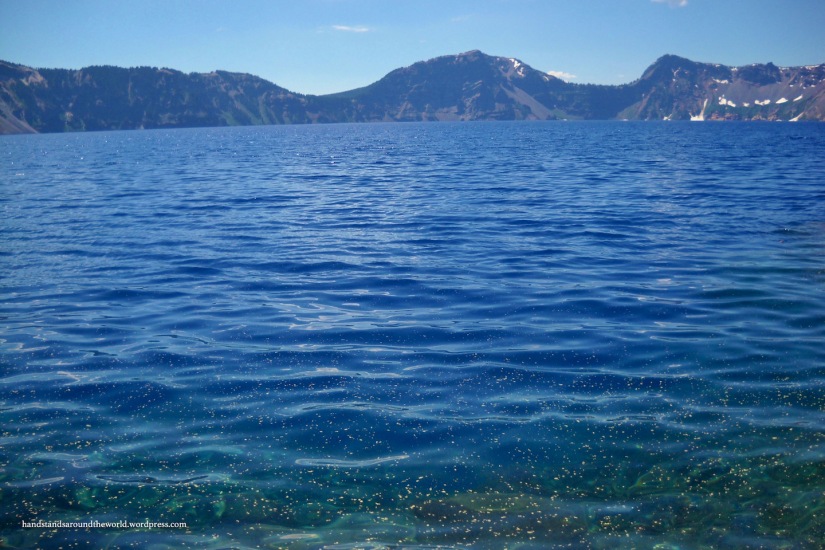 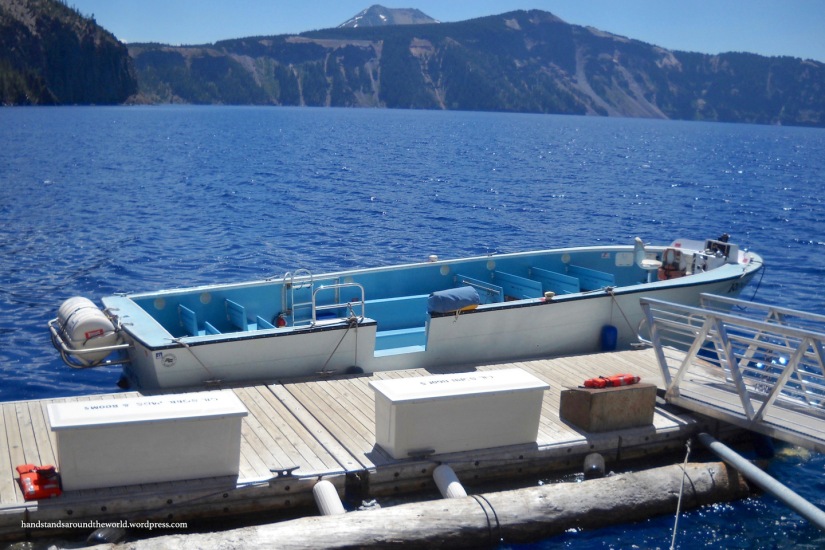 Our tour guide was very knowledgeable and friendly, and we learned a lot about the geology and history of the lake. Of course, this was 4 years ago so I don’t remember all of what we learned. But I remember that we learned it. 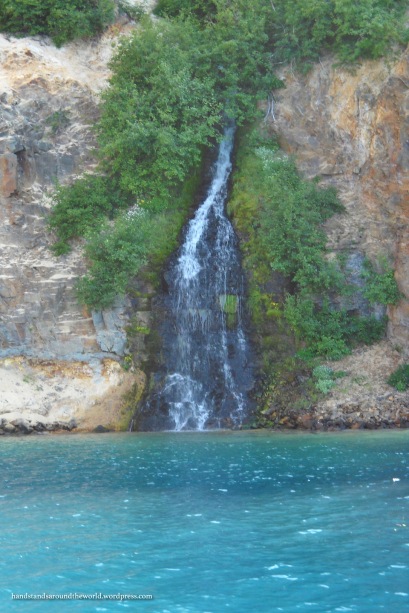 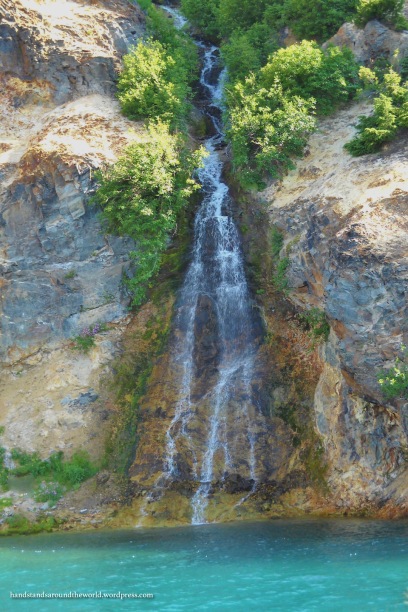 The boat dropped us off on a small dock on the south side of Wizard Island, a cinder cone that was formed by smaller eruptions that occurred after formation of the initial caldera. It rises over 2,000 feet (610 m) from the lake floor and is also topped by a crater. A 0.9 mile (1.4 km) trail climbs about 700 feet (215 m) from the boat dock to the summit. A second trail leads around to the western side of the island to an area called Fumarole Bay. 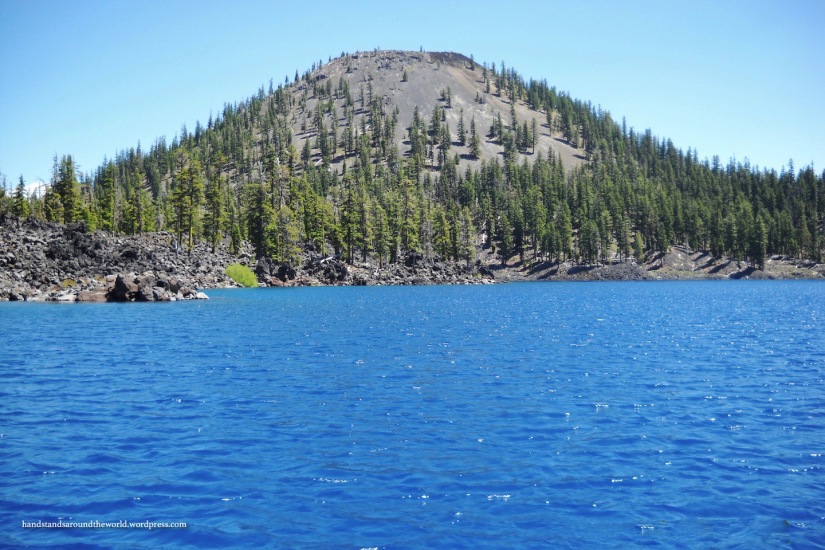 Upon our arrival, we immediately began to climb the trail to the summit of the cone. It was steep and had a lot of switchbacks, but was much less strenuous than the hike out of Cleetwood Cove. All along the trail, we could see the few coniferous trees, grasses, flowers, and mosses that manage to grow on the island. In particular, the floor of the crater provides favorable conditions for many of these species to flourish.

It didn’t take us more than 30 minutes to reach the summit, which left us with plenty of time to explore. We were able to walk the entire perimeter around the crater, which is 500 feet (150 m) across and about 100 feet (30 m) deep. A couple small trails descended into the crater, but I’m not sure that they were actually supposed to be there. The crater walls are steep and erode easily, so we stayed up on the rim. 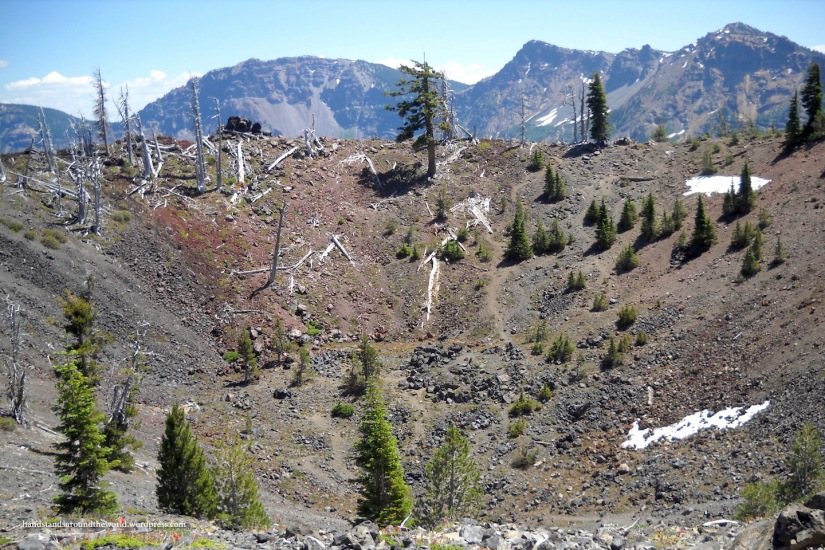 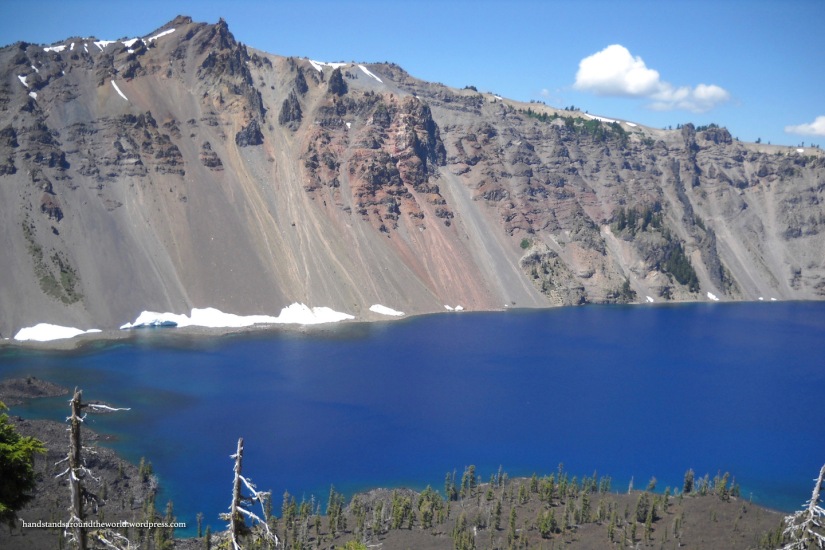 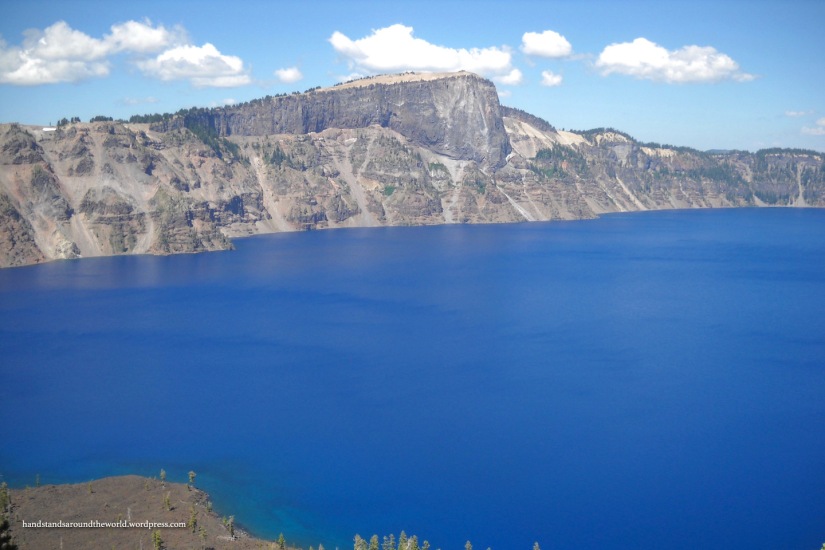 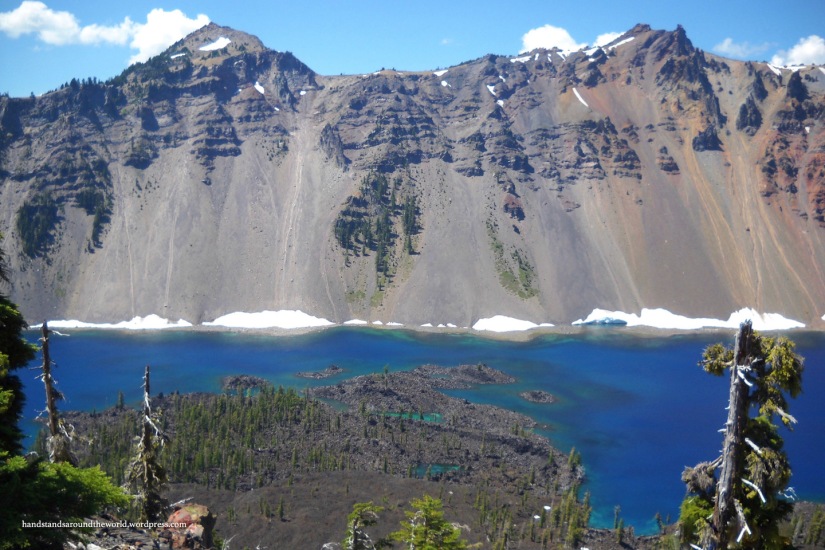 With about an hour left before the boat was due to pick us up, we headed back down to the dock. We debated heading over to Fumarole Bay for a few minutes but instead decided to just relax and soak our feet in the crystal clear water.

You may remember from my last post that Crater Lake is extremely deep. Well, as a consequence of its depth, Crater Lake is also very cold. In the summer, water temperatures hover around 55ºF (13ºC) at the surface.

Which doesn’t seem all that cold, really… until you jump into it.

My family thought I was crazy when I put my swimsuit on under my clothes that morning, but I figured if I was going to be down in the crater, I was going to go for a swim. And so I took off my hiking boots and clothes and jumped off the dock into the frigid water.

Actually, to say I went for a “swim” in Crater Lake may be a bit generous. As soon as I surfaced, I shouted that it was really cold and began clumsily making my way back to the dock. But my muscles didn’t want to function and my attempt to hoist myself up was pathetic. My sister caught the whole thing on video, and I looked like a beached whale as I flopped my way up onto the dock. Despite its potential for providing comic relief, I won’t be posting that video here.

But it was worth it, because now I’ll always be able to say that I jumped into Crater Lake!

By the time the boat arrived, I was pretty well dried off. Thankfully it was a warm day. The second half of the boat tour was longer than the first, as we completed our trip around the lake. We were afforded close-up views of small waterfalls cascading down the caldera walls, and passed by the Phantom Ship, which looks completely different up close. 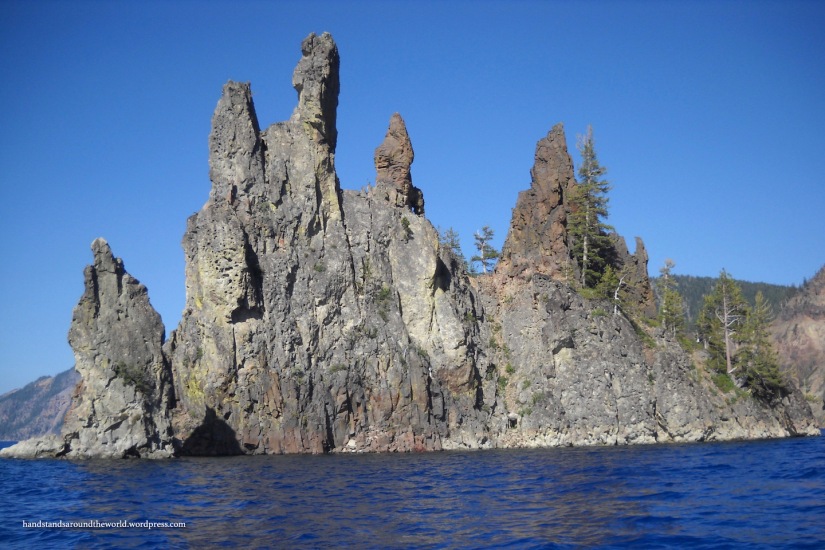 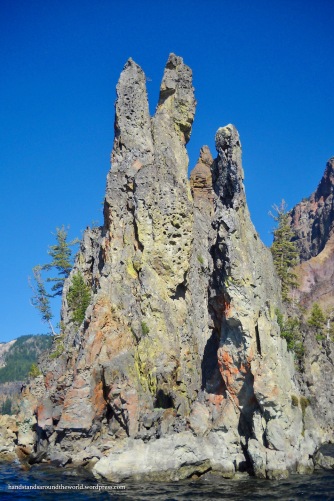 For all of our hesitation about the price of the tickets, I can say with absolute certainty that we made the right decision. We’re pretty frugal people in general, but sometimes when you’re traveling, you just have to splurge.

So if you’re planning a trip to Crater Lake, this is a splurge I highly recommend. Experiencing the lake from inside the caldera is completely different from the experience up on the rim. The water is clearer, the caldera seems bigger, and everything looks different from down below.

This was the perfect way to end our vacation, and we arrived back at our campsite exhausted but exhilarated.

Sadly, the exhilaration was short-lived.

As we climbed out of the car ready to make some dinner, we became acutely aware of the sound of air whooshing out of one of our tires. Actually whooshing. I’d never seen a tire go flat so fast.

And so we unloaded our entire trunk to get to the spare and spent about ten minutes trying to get the lug nuts off (we’re not wimpy, they’d been machine tightened). I ended up standing on the tire iron while my mom and sister held onto either end.

When we finally arrived at an auto repair shop the next day (after toodling along at 50mph/80kmh on our spare tire for about 100 miles/160 km) and had to once again unload our entire trunk all over the lawn, the mechanics felt so bad for us that they didn’t charge us for the flat repair (shout out to Midas in Bend, Oregon!).

But even an unfortunate flat tire couldn’t put a damper on what had been a lovely, sunny vacation full of wonderful adventures. Both Crater Lake and Mount Rainier are among my favorite places I’ve ever visited and I can’t wait to return and do some more exploring!