If you’ve been following me for a while, you may remember our failed attempt to visit Four Corners Monument (and if not, you can read about it here). Well as it happened, we found ourselves in the area once again the very next summer, on our way from Natural Bridges National Monument in Utah to Carlsbad Caverns National Park in New Mexico. And so this time – after calling ahead to confirm that they would be open – we set off once again for Four Corners.

And lo and behold, when we arrived this time the gates were open!

Four Corners Monument is probably exactly what you’d expect. There’s a geographic marker, flags of all the states (as well as flags of the Native American Reservations between which the monument is located), and informative signs. And, of course, there’s the place where you put one limb in each state so you’re in all four at once. Or, in my case, put each hand in two states simultaneously and do a handstand in four states at the same time. It’s not my most extreme handstand ever but it might qualify as the most unique. 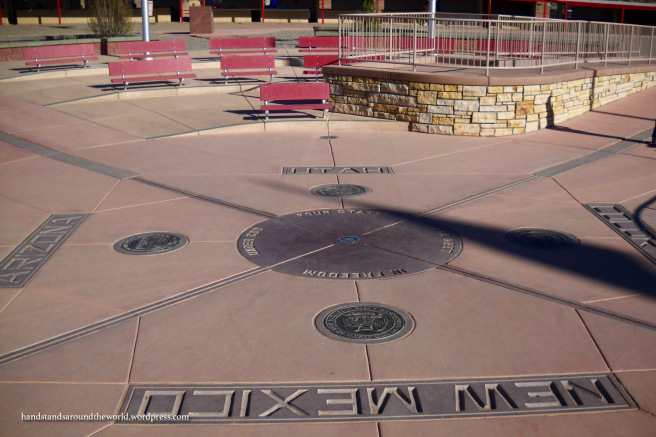 The monument also has an entire area set up for locals, mostly from the Navajo Reservation, I believe, to sell their handmade items. There’s jewelry, paintings, tapestries, things of the sort. I bought a really pretty hematite ring; it’s handmade and the stone is magnetic so it stays in place without glue. However, I bought the ring in the hot desert in the middle of summer so my fingers were nice and fat. Back in the non-desert, the ring is a little large. Maybe I should start doing some finger exercises to bulk them up a bit.

Anyway, there isn’t really a lot else to say about Four Corners. We read the signs, stood in all four states at once, took some pictures, browsed the crafts, and that was that.

And so we hopped back in the car and began driving all the way through New Mexico (New Mexico is a big state, it was a long drive) to Carlsbad Caverns National Park.