Our next day in Jasper National Park was supposed to be the day we hiked Mount Edith Cavell. This was a hike we were all especially excited for.

Instead, it was the day I woke up sick at 5am and my friends ended up driving me to the hospital. I was suffering from some pretty serious GI symptoms – suffice it to say there was nothing left in my system by this point – as well as a mysterious pain in my lower back. I couldn’t even keep water down. I’m told that when I showed up at the ER, I was so pale due to dehydration that I looked gray. I didn’t think to look in a mirror. I was too busy being sick and miserable.

And so I spent 9 hours in the Jasper ER getting abdominal x-rays and pain medication and something to calm my stomach. They infused me with 2 entire IV bags and I still didn’t have to pee. That’s how dehydrated I was. By late afternoon, though, I was sitting up in bed playing cards with my friends. And by dinner, I was out of the hospital and eating chicken fingers and fries at a restaurant in Jasper. It was the shortest – but most severe – illness I’ve ever had.

They were never able to definitively diagnose me, other than to say that it was some sort of stomach bug. But the weird thing was that all 4 of us had eaten the exact same foods the previous day and refilled our water bottles at the same spigots. Apparently I was the lucky one that got something nasty in my water. That’s our best guess, anyway.

So obviously Mount Edith Cavell was not to be, which just gives me a reason to return someday. But the day wasn’t a total loss. After dinner, we had just enough time to visit Pyramid and Patricia Lakes, located on the western edge of the town of Jasper. There’s a bridge on Pyramid Lake that leads out to Pyramid Island. And so we relaxed on the island and watched the sun sink down behind the Canadian Rockies, signaling the end of a day that didn’t go at all according to plan.

The next day was our final day in Jasper, and we had just enough time for one last hike before heading out. Conveniently, the Valley of the Five Lakes trailhead was just 10 minutes south of our campsite. The hike itself is a 2.8 mile (4.5 km) loop that passes by the very creatively-named First, Second, Third, Fourth, and Fifth Lakes. The lakes are all different shapes and sizes, but what’s most unique about them is that each is a slightly different shade of blue-green. I think Third Lake is my favorite.

The return to our car sadly marked the end of our Jasper adventures. It was now time to head west toward the ocean… but we still had some sight-seeing to do along the way!

Just outside the boundary of Jasper National Park, in British Columbia, are two provincial parks – Mount Robson and Rearguard Falls. Mount Robson is the highest point in the Canadian Rockies and the most prominent peak in the entire Rocky Mountain Range. It rises over 9,000 feet (2700 m) above the surrounding landscape, to an elevation of 12,972 feet (3954 m). The top of the mountain is snow-covered with a very sharp profile. It’s also often in the clouds, and this particular day was no exception. The weather was beautiful, though, so we spent about an hour at the visitor center learning about the area, eating lunch, and taking some pictures. Even with the summit obscured, we were still in awe of just how huge Mount Robson truly is.

Rearguard Falls, on the other hand, is not huge. The water only tumbles 20 feet (6 m), and the Fraser River is so wide that it makes the waterfall look even shorter than it really is. Nevertheless, Rearguard Falls is unique because it marks the farthest point upstream that salmon migrate for spawning. The falls is nearly 800 miles (1285 km) from the ocean; the fact that any fish can successfully swim upstream for that distance is amazing to me! 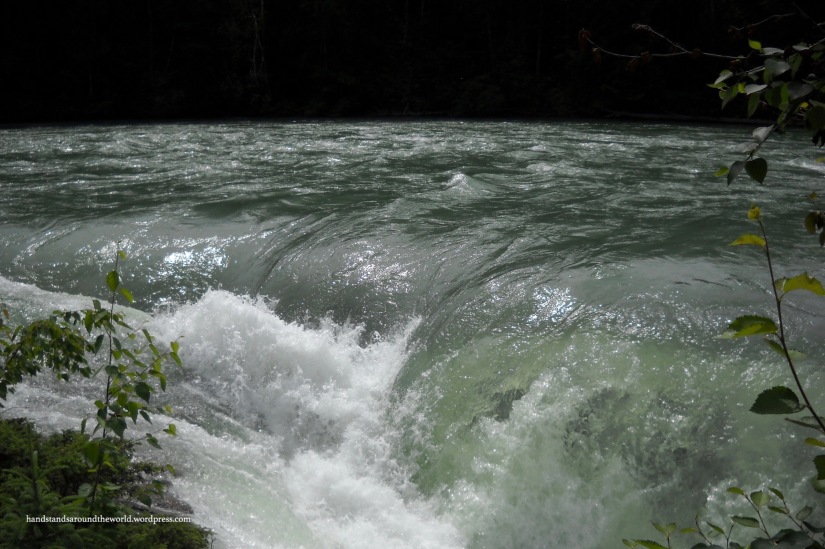 We camped at a private campground somewhere in the middle of British Columbia that night – and got absolutely dumped on. The rain exceeded the waterproof capacity of our tent, so that wasn’t the most fun night ever. But I guess it can’t always be warm and sunny. We had to take the good with the bad and – hospital trip aside – it had been a pretty good vacation so far!

So thankful that my original adventure buddy is a strong, independent woman who taught me to be one too ❤️
Take me back 🏔
Highest peak in Boulder: ✅
Finally got around to participating in the #tendaytravelchallenge that’s been going around Wordpress for the past couple months. To see my photos and make your guesses... link in bio ⬆️
When it’s 62°F in January, we sample a new local brewery
“I wonder if I can do a handstand with snowshoes on?”