One of my favorite adventure activities is exploring caves. I’ve never truly gone spelunking (it’s on my to-do list), but if we’re somewhere with a cave, we always sign up for the tours. As it happens, formation of caves in lava flows is fairly common, meaning there are a few caves at Craters of the Moon that are open for exploration.

Unlike many parks, entry to the caves at Craters of the Moon is free, though we did have to obtain a permit at the visitor center. The reason for the permit system is two-fold; to limit the number of people entering the caves, and to protect the local bat populations against White Nose Syndrome, a disease that is currently decimating bats all across the country. To prevent the spread of this disease, any clothing or gear (including cameras) that have ever been in another cave or mine are not allowed inside the caves at Craters of the Moon without following proper decontamination protocols.

Once we obtained our caving permit, we proceeded to the Caves Trail, located just past the halfway point on the park loop road. At this trailhead is the 1.6 mile (2.6 km) paved trail to four different caves. All four caves are lava tubes: caves that form when the top layer of lava hardens over while molten lava is still flowing beneath the surface. Once the flow of lava ceases, what remains is essentially a tunnel.

The first lava tube we went to was Dew Drop Cave, located just 0.2 miles (0.33 km) from the trailhead. This is the smallest of the caves, with two entrances leading to separate sections of the cave. There is no artificial light or established trail in any of the caves at Craters of the Moon; sturdy shoes and flashlights are necessary.

Two-tenths of a mile (0.33 km) beyond Dew Drop cave, the trail splits. We continued straight for 0.3 miles (0.5 km) to Boy Scout and Beauty Caves. The entrance to Boy Scout Cave and the passages inside are smaller than the other caves and required a bit of crawling. It was also extremely dark and cool inside Boy Scout Cave – we even saw some ice in cracks on the floor! The cool, wet environment inside the cave allowed for formation of some very unique and intricate mineral features. 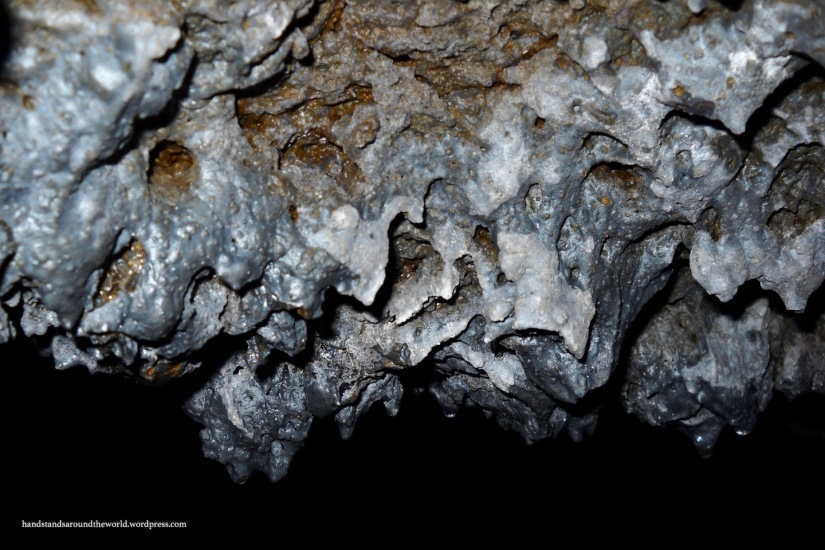 Beauty Cave was much easier to enter and the main room is much larger. Signs warn against exploring beyond this main room. The first time I visited Craters of the Moon was actually in 2003 with my family. My dad took a photo of my mom, sister, and me near one of these warning signs and it’s the least flattering photo of my mom that has ever existed. It must have been the combination of the pitch black environment and the brightness of the camera flash that caught her off guard. Her face just looks utterly blank. My sister tried to reproduce the photo on this more recent trip but was ultimately unable to replicate my mom’s expression. 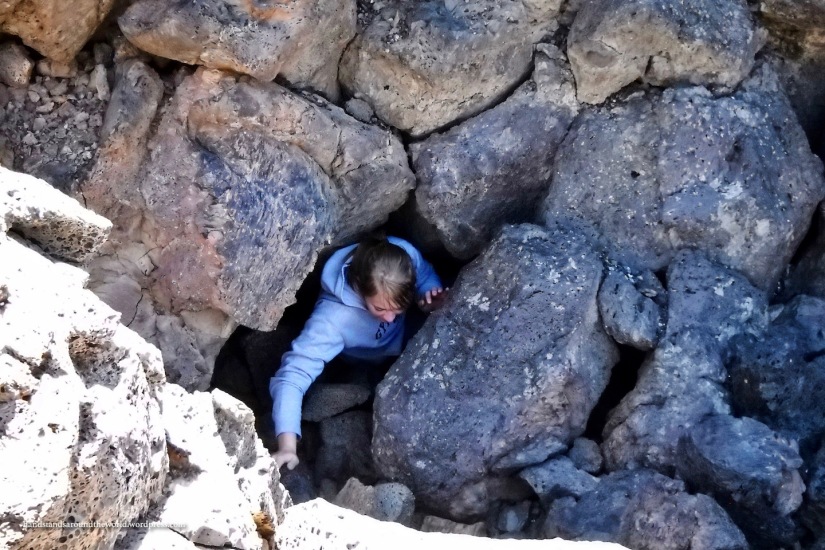 Anyway, to get to the final cave we headed back to the fork in the trail and turned left. This took us to a set of metal stairs leading down into Indian Tunnel. Lava tubes can range greatly in size; while the other 3 caves are relatively small, Indian Tunnel is 30 feet (9 m) high, 50 feet wide (15 m), and 800 feet (244 m) long. There are periodic openings in the ceiling of Indian Tunnel, so a flashlight wasn’t needed. However, as in the other caves there was no established trail.

We spent the most time exploring Indian Tunnel, and were able to walk much of the length of the cave and crawl around in some smaller side tunnels. Because Indian Tunnel is much more open to the air than the other caves, the environment inside is different. It’s warmer and dryer, so the mineral formations seen in most caves were nowhere to be found.

We definitely enjoyed the Caves Trail, and it was interesting to see the differences between limestone caves and lava caves. It was a very different caving experience from what we were used to. It’s also nice that we were able to explore the caves on our own, spending as much or little time as we wanted in each place. All in all, a fun way to wrap up our Labor Day weekend, and a good end to the summer of 2010!

My favorite national park turns 111 years old today 🏔
After the last three weekends of hiking on the plains, it was so lovely to be reunited with the mountains today 🏔
This time last week I was upside down on the highest point in Kansas
Happy National Park Week 🏔
Checked a new state (and a new high point) off the list today. 45 down, 5 to go!
Almost three years in Colorado and until today we’d never actually walked all the way around Bear Lake...