The next morning, we headed off to explore the north rim of the Grand Canyon. There’s only one campground inside this section of the park, located near the visitor center at Bright Angel Point. From the visitor center, a 0.5 mile (0.8 km) round-trip paved trail leads out to Bright Angel Point, which was where we’d watched the sunset the previous evening. From this area, we backtracked slightly to where Cape Royal Road branches off from the main road.

Unlike the south rim, in which the road parallels the rim of the canyon, Cape Royal Road extends out into the canyon, following the Walhalla Plateau 20 miles (32 miles) out to Cape Royal. Cape Royal is relatively in the center of the canyon; it was a very different perspective, seeing the canyon on all sides of me. It made me feel very small and isolated. We began our day here. From the end of the road, we hiked the Cape Royal Trail, a 0.6 mile (1 km) round-trip easy hike along the edge of the Walhalla Plateau. It provided views of the canyon, the Colorado River, and a hole in the wall called Angel’s Window. 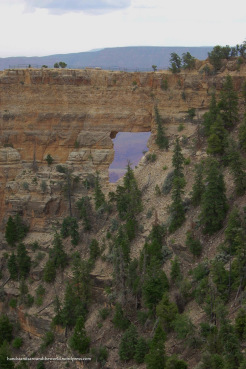 After this short hike, we began working our way back down Cape Royal Road, stopping at each pullout along the way. The first pullout was the trailhead for Cliff Spring, a small natural spring that flows out of the side of the Walhalla Plateau. The trail was a bit precarious, as the rock walls above us were quite overhung – though compared to climbing Angel’s Landing and hiking down into the Grand Canyon, this trail seemed relatively normal.

Just down the road from the Cliff Spring trailhead is the Walhalla area, which is marked not only by canyon views, but also by a second set of Ancestral Puebloan ruins! The Walhalla Glades Pueblo was occupied for approximately 100 years between AD 1050-1150. Remains of one structure are visible here, and a brochure is available to explain the significance of each feature. Across the road from the Glades is Walhalla Overlook and views of the canyon.

Back on the road, our next stops were at overlooks for Roosevelt Point and Vista Encantada, which also includes a picnic area. We stopped here for some much-needed sustenance, only to have our picnic interrupted by a couple of deer that decided to mosey on through. Better safe than sorry, we decided, and retreated to our car with our lunches.

Next was Greenland Lake (although calling it a lake might be a bit ambitious) and an old abandoned log cabin.

Just up the road, Point Imperial Road branched off to the right, leading 3 miles out to Point Imperial. This is one of the highest sections of the north rim and as we looked across the canyon, the elevation difference between the north and south rims became very evident. From this perspective, we could also see how completely flat the land is on the south rim. 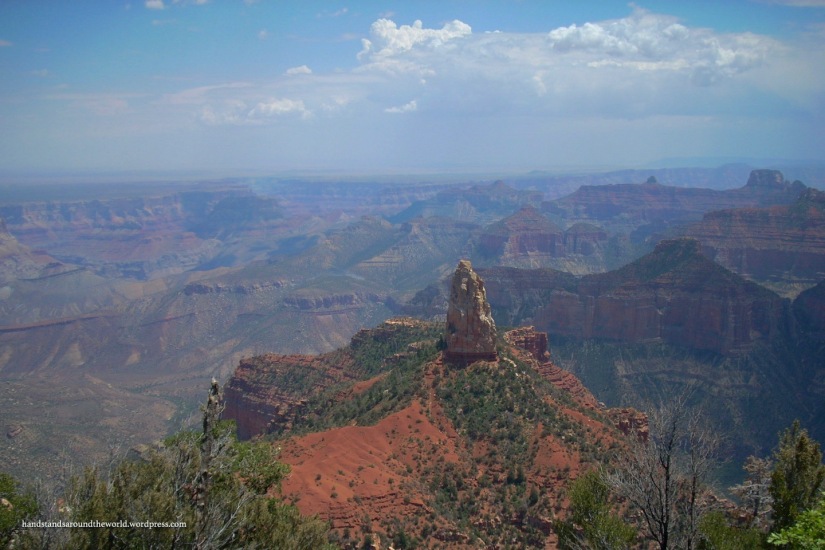 Our last stop of the day was back near the campground, where we took a short hike down the North Kaibab Trail to Coconino Overlook. You may remember from my earlier posts that we also hiked a section of the South Kaibab Trail on the south rim. Well these are indeed two halves of the same trail. It is possible to hike from one rim down to the Colorado River and up to the other rim (though not in one day – there are signs all over the park warning against this) – a hike which involves a 6,000 foot (1830 m) elevation change in approximately 28 miles (45 km). We, however, elected to just hike the 1.5 miles  (2.4 km) round trip down Roaring Springs Canyon to Coconino Overlook.

Sadly, this hike marked the end of our time at the north rim of Grand Canyon National Park. While the south rim is the more popular section of the park by far, I highly recommend the north rim. Crowds are smaller, the landscape on the rim is more forest than desert, and the views of the canyon are equally stellar. Plus, the north rim is the only place in the world to see the Kaibab squirrel – a black squirrel with a white tail. My photos of them are unfortunately not great, but I think you get the idea.

Alright, well that concludes my Grand Canyon saga. Stay tuned for the last stop on our vacation: a return to Utah to explore Cedar Breaks National Monument!

Join 1,092 other followers
Follow Handstands Around the World on WordPress.com