In the spring of my junior year of high school, our school orchestra went on a five-day trip to Calgary and Edmonton, Canada. It was mostly an educational thing – we performed for other schools, they performed for us, etc. But my orchestra teacher also planned in some sight-seeing activities, including going to the top of the Calgary Tower, visiting the 1988 Calgary Olympic Park, and spending a day at the indoor amusement park in the Edmonton Mall. Sadly, I don’t have any pictures from here because I was too preoccupied with riding a roller coaster for the first time.

I’ve ridden a dozen others since and I’m a total adrenaline junkie, but that one is still the scariest. Because right as you’re accelerating downhill around a curve, there’s a mirror. And for a split second, you see your coaster car in the mirror and it looks like you’re going to crash into another coaster. You don’t (obviously), but whoever designed that had a bit of a diabolical side.

Anyway, I realize this post doesn’t give a whole lot of insight into what to actually do in either of these cities, but I’ve at least given you a couple of ideas. If nothing else, hopefully the photos below will convince you to ride the elevator to the top of an Olympic ski jump. And then realize that, no matter how adventurous you are, you’d never be crazy enough to strap skis to your feet, zoom down a ramp that starts 90 feet  (30 meters) above the ground, and fly off the end of it.

Ah, who am I kidding? Sounds like fun to me! 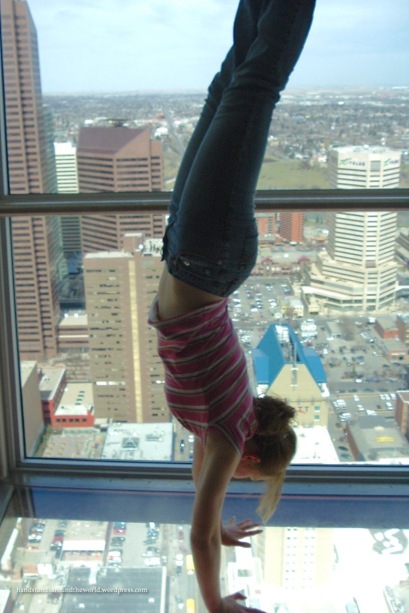 Handstand in the Calgary Tower